Yes you read that headline correctly – and unfortunately. The only conundrum for me here is this: is this story best placed under the heading of idiotic, loony, moonbat political correctness, or the triumph of creeping sharia? I guess it properly belongs under both headings.

When I first heard about this, it was so overwhelmingly incredible, bizarre and mind-numbing, that I assumed it could not be a true story. But with even the BBC now getting into the act and reporting it, I guess it sadly is true. However I am still almost left without words over this.

The story as one write-up has it goes like this:

Two people who threw bacon and wrapped it around door handles at a mosque in Scotland were sent to prison on Friday. Douglas Cruikshank, 39, and Chelsea Lambie, 18, were convicted over the attack at Edinburgh’s Central Mosque in January last year. The consumption of pork is forbidden in Islam.
A court in Scotland’s capital heard that the pair were associated with the far-right Scottish Defence League.
Cruikshank, of Galashiels in southern Scotland, was sentenced to nine months’ imprisonment and Lambie, from Paisley near Glasgow, was ordered to spend 12 months in an institute for young offenders. They had both been convicted of threatening and abusive behaviour.
A third man, 25-year-old Wayne Stilwel from Gorebridge near Edinburgh, was sentenced to 10 months in prison in September over the attack. “The Muslim community are a valued and integral part of Scottish society and there is no place for such attacks in modern Scotland,” said state prosecutor John Logue after the sentencing.

The longer BBC report adds other bits of information, including:

A security guard at the mosque told the trial of the offence the bacon would have caused to Muslims. Usman Mahmood said: “I was surprised if a person did it for a joke. It is against our culture and religion. We do not eat pork or even touch it. I felt very bad seeing this meat in my sacred place. It hurt my feelings when I saw this meat hanging inside the mosque in the worshipping area. It was very disturbing.” The court heard that during a police interview Lambie had admitted being a member of the Scottish Defence League. The pair were accused of behaving in a threatening or abusive manner likely to cause fear and alarm. 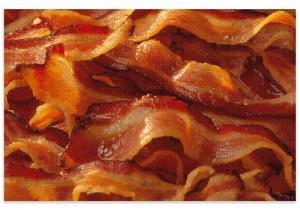 Wow. Double wow. Where does one begin with all this? Throwing bacon is now a criminal offence in Scotland, and you can spend a year in jail for daring to do it?! And the basis for this horrific crime against humanity? As the Muslim guard said, “It hurt my feelings”.

So now you can be thrown into the slammer with the key thrown away for hurting someone’s feelings? Really? Or more specifically, for hurting the feelings of a Muslim? Well guess what Jack, my feelings are hurt too – and big time. They are hurt over this sheer idiocy and diabolical political correctness.

And they are hurt all the more because of the reality of creeping sharia. There is no more need for me to write articles about this. If this incredible episode does not convince you that stealth jihad and creeping sharia have won the day in the West, then you will not be convinced even if an airplane flies into your home with cries of Allahu Akbar ringing out.

Now that is what I call “threatening or abusive” behaviour. But not in dhimmi Scotland it seems. Here we have a nation so utterly duped and blinded by the PC lobby and Islamic taqiyya that they actually see the bad guys as those who warn about all this!

Those who fling a bit of bacon around are now the enemies of the state, while those who have promised to kill or enslave all infidels are elevated to the level of a protected species. Go figure.

When I was recently in England and amazed at just how far down the gurgler things had gotten there, some folks assured me that the situation was even much worse in Scotland. I found that a bit hard to believe at the time, given what a hellhole England was becoming.

Well, I certainly no longer disbelieve them.

25 Replies to “Bacon Tossing Will Now Land You In Prison”