The euthanasia advocates do not just want legalised euthanasia for the terminally ill: they basically want it for everyone for any reason. And many of these pro-death advocates have made this quite plain over the years. They really are fixated on death, and think everyone should be able to bump themselves off any time they like.

Our own Dr Death, Philip Nitschke, made this quite clear the other day. Many heads are now shaking over his most recent case of dishing out death. It seems he has helped knock off a man who was neither terminally ill nor old, going against all medical ethics and duty of care. 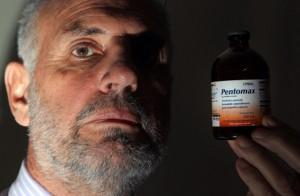 He offered a lethal drug which killed 45-year-old Perth man, Nigel Brayley. And he even bragged about it and defended his actions on ABC’s 7.30 program. Here is part of the transcript from that show. Consider this incredible exchange:

CAITLYN GRIBBIN: Nigel Brayley had taken the euthanasia drug of choice, Nembutal, to end his life.
[His friend] Kerry O’Neill was baffled and searched for answers by looking at Nigel’s email account.
KERRY O’NEIL: What did particularly horrify me was that there had been an exchange of emails between himself and Dr Philip Nitschke.
PHILIP NITSCHKE: We had a lot of communication with Nigel. We have a usual age of 50. He came at a younger age; I think he was 45 or 46. Oh, well, he was a person who recognised that this is an important issue that it’s better to have thought about this and be prepared rather than leave things to a point where you become perhaps too incapacitated or for some other reason unable to carry out these things yourself.
CAITLYN GRIBBIN: The emails revealed how Nigel had consulted Dr Nitschke.
KERRY O’NEIL: Nigel was very explicit in replying to Dr Nitschke that he was going to take his life within the next fortnight. Also, that he was not a terminally ill person in any way, that he was presumably fit and healthy, but just going through a flat period in the previous nine months of his life, like many people do.
CAITLYN GRIBBIN: Is it possible that Dr Nitschke thought Nigel was buying the drug Nembutal to stockpile for older age?
KERRY O’NEIL: No, because he talked about his final statement and, “You will receive my final statement within the next two weeks.” It was pretty definite.
CAITLYN GRIBBIN: Doctor, Nigel Brayley’s family have given us some emails where the two of you were corresponding.
PHILIP NITSCHKE: Yes.
CAITLYN GRIBBIN: In that, Nigel Brayley tells you that he is 45 years old, he says he is not terminally ill and that he plans to take his life in two weeks.
PHILIP NITSCHKE: Where’s it say that?
CAITLYN GRIBBIN: On the second page.
PHILIP NITSCHKE: Ahh, when he says he plans to take his life in two weeks, yes. OK.
CAITLYN GRIBBIN: Yes.
PHILIP NITSCHKE: And what did we say?
CAITLYN GRIBBIN: Did you try to stop him? Did you communicate with him that perhaps he should seek some sort of counselling?
PHILIP NITSCHKE: No. I – look – it’s not – if a person comes along and says to me that they’ve made a rational decision to end their life in two weeks, I don’t go along and say, “Oh, have you made a rational decision? Do you think you better think about it? Why don’t you have a counsellor come along and talk to you?” We don’t do that.
CAITLYN GRIBBIN: Why not, if they’re suicidal and depressed?
PHILIP NITSCHKE: Well, OK, were they depressed?
CAITLYN GRIBBIN: He says that he’s suffering, he says he’s not terminally ill. He’s …
PHILIP NITSCHKE: He says he’s suffering? Let’s have a close look at this. Show me where it says he’s suffering.
CAITLYN GRIBBIN: Yes, on the second page.
PHILIP NITSCHKE: OK, let’s have a look at it.
CAITLYN GRIBBIN: In that paragraph, Nigel Brayley says, “I don’t honestly fit neatly under Exit’s charter of supporting a terminal medical illness, however, I am suffering and have been now for some nine months.”

Yikes. He “made a rational decision to end their life”? Um no, Dr Death, when people are depressed and in great mental and psychological pain, they are not well placed to make rational decisions. Thankfully many others have lashed out at Nitschke over this. As reported in another article:

Australian Medical Association president Brian Owler said doctors had an ethical and moral obligation to provide suicidal patients with the opportunity to seek appropriate treatment. “To suggest a patient with suicidal ideation has a rational or cogent reason for their wish to suicide and that means there is no obligation to help them is completely false and it is immoral,” he said.
“A patient who has suicidal ideation deserves the opportunity to seek help, to be treated and to be supported. It has nothing to do with a debate about euthanasia … to suggest a doctor might vacate their obligation to provide support and care for a patient.”

And former Victorian Premier Jeff Kennett, the Chairman of the depression help group Beyond Blue was also aghast at the death doctor’s actions:

Mr Kennett said Dr Nitschke should have referred Mr Brayley to a psychologist or psychiatrist and his actions were “offensive to all standards of common decency”. He said 2535 Australians took their own lives in 2012, which was almost twice the country’s road toll of 1298, and millions were being spent by governments and community organisations in a bid to reduce the number of suicides.
“That figure is unacceptable and we are all working to reduce it except, it seems, Dr Nitschke, who seems to be working to add to those numbers,” he said. Mr Kennett said he personally supported legalising euthanasia “for the terminally ill, for those for whom the dignity of life has been lost and under special conditions”. But he said he believed Dr Nitschke had “crossed the line of decency and professional conduct”.

Ros Phillips of FamilyVoice asked this: “How long must we wait for Dr Nitschke to be called to account in a court of law? And how long must we endure attempts by advocates such as Greens Senator Richard Di Natale to legalise, legitimise and normalise suicide by calling it ‘euthanasia’?”

Quite right. Depressed people need help, counsel and support. They don’t need a lethal drug or a bullet to the head. Giving depressed people an easy way out is simply unthinkable, given our high rates of suicide. This is especially true regarding youth depression and suicide.

Indeed, these euthanasia advocates only compound the problems here. And people like Nitschke have long been pushing this. Consider the lunatic proposal that he made back in 2001, when he actually said that we should allow anyone, including troubled teens, to get access to suicide pills.

And he even said we should be able to pick them up in supermarkets! In an interview he said this: “This would mean that the so-called ‘peaceful pill’ should be available in the supermarket so that those old enough to understand death could obtain death peacefully at the time of their choosing.”

This guy is simply obsessed with death. He should have been locked up long ago. He is not only engaged in medical misconduct, but is actually encouraging mass suicide for basically whatever reason. If he hates life so much, maybe he should just bump himself off. But he should not be allowed to help kill other people.

At least he has again spilled the beans on what a diabolical agenda the pro-euthanasia crowd is involved in.

9 Replies to “Pro-Deather Spills the Beans”