The world has rightly been shocked over revelations that big name entertainers like Rolf Harris and Jimmy Savile have been found guilty of horrible child abuse crimes. But sadly this is really just the tip of the iceberg it seems. Not only is paedophilia an ongoing problem, but the worst bit is how many are actually trying to justify all this.

As much as some people want to live in dreamland here, the sad reality is this: there most certainly is a slippery slope in action here. The deniers can nay-say this all they like, but we have proof of this slope all over the place. Everywhere we look we see various sleazy sexualities being seriously promoted and defended. 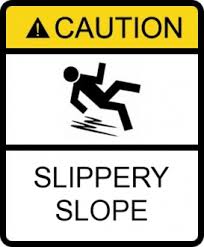 And so much of this is due to the success of the homosexual lobby in pushing its agenda. Many others are emboldened by the wins of the homosexualists, and they too are now demanding their piece of the pie. They know quite rightly that the exact same arguments used for something like homosexual marriage can be used for things like group marriage, “intergenerational sex” and other radical sexual causes.

I document all this very carefully and in great detail in my forthcoming book, Dangerous Relations. Whether it is the push for polyamory, or paedophilia, or incest, or bestiality, or what have you, all these movements have now come out of the closet big time, following the homosexual activists and the handy groundwork they have laid.

Of course the slope goes back a bit further than this. In the 60s we managed to convince ourselves that sexuality can somehow be separated from procreation. Thus we took the colossal step of saying marriage was not important, and that de facto and cohabiting relationships were equally fine.

Of course such people were laughed at, mocked, ridiculed and abused by the secular lefties. “This will never happen! You are just fear-mongering. There is no slippery slope. You are a nut job.” And of course the very thing we warned about is now reality.

And so the same ridicule and smear tactics are being used against those warning about all the other sexual perversions that will follow. They cannot deny the evidence here – they can only abuse and mock and pour scorn on those who are connecting the dots.

The issue of polyamory alone is being promoted everywhere, even in academic and legal circles. I recently had to start a new category heading on my website on this, and already I have 45 articles documenting the push for polyamory.

And believe me, we have the same with paedophilia. All over the place we have voices calling for the legalisation of “intergenerational” sexual relationships. ‘If it is consensual, what is the harm?’ they ask. They are taking the same page out of the homosexual playbook by also claiming people are born this way, and it is unjust and discriminatory to deny them their “rights”.

I have written about this numerous times now. But a recent article out of the UK nicely provides more careful documentation and evidence about all this. Andrew Gilligan has written an important piece looking very closely at the attempt to make paedophilia fully normal and acceptable. He begins:

“Paedophilic interest is natural and normal for human males,” said the presentation. “At least a sizeable minority of normal males would like to have sex with children … Normal males are aroused by children.” Some yellowing tract from the Seventies or early Eighties, era of abusive celebrities and the infamous PIE, the Paedophile Information Exchange? No. Anonymous commenters on some underground website? No again.
The statement that paedophilia is “natural and normal” was made not three decades ago but last July. It was made not in private but as one of the central claims of an academic presentation delivered, at the invitation of the organisers, to many of the key experts in the field at a conference held by the University of Cambridge. Other presentations included “Liberating the paedophile: a discursive analysis,” and “Danger and difference: the stakes of hebephilia.”
Hebephilia is the sexual preference for children in early puberty, typically 11 to 14-year-olds. Another attendee, and enthusiastic participant from the floor, was one Tom O’Carroll, a multiple child sex offender, long-time campaigner for the legalisation of sex with children and former head of the Paedophile Information Exchange. “Wonderful!” he wrote on his blog afterwards. “It was a rare few days when I could feel relatively popular!”

He mentions the current cases in the news and continues:

But unnoticed amid the furore is a much more current threat: attempts, right now, in parts of the academic establishment to push the boundaries on the acceptability of child sex. A key factor in what happened all those decades ago in the dressing rooms of the BBC, the wards of the NHS and, allegedly, the corridors of power was not just institutional failings or establishment “conspiracies”, but a climate of far greater intellectual tolerance of practices that horrify today.
With the Pill, the legalisation of homosexuality and shrinking taboos against premarital sex, the Seventies was an era of quite sudden sexual emancipation. Many liberals, of course, saw through PIE’s cynical rhetoric of “child lib”. But to others on the Left, sex by or with children was just another repressive boundary to be swept away – and some of the most important backing came from academia.
In 1981, a respectable publisher, Batsford, published Perspectives on Paedophilia, edited by Brian Taylor, a sociology lecturer at Sussex University, to challenge what Dr Taylor’s introduction called the “prejudice” against child sex. Disturbingly, the book was aimed at “social workers, community workers, probation officers and child care workers”.
The public, wrote Dr Taylor, “generally thinks of paedophiles as sick or evil men who lurk around school playgrounds in the hope of attempting unspecified beastliness with unsuspecting innocent children”. That, he reassured readers, was merely a “stereotype”, both “inaccurate and unhelpful”, which flew in the face of the “empirical realities of paedophile behaviour”. Why, most adult-child sexual relationships occurred in the family!
The perspectives of most, though not all, the contributors, appeared strongly pro-paedophile. At least two were members of PIE and at least one, Peter Righton, (who was, incredibly, director of education at the National Institute for Social Work) was later convicted of child sex crimes. But from the viewpoint of today, the fascinating thing about Perspectives on Paedophilia is that at least two of its contributors are still academically active and influential.

He reminds us that the American Psychiatric Association (APA), is now fiercely debating this just as it did homosexuality a few decades ago. Just as homosexual activists pressured the APA to drop homosexuality from the list of disorders in The Diagnostic and Statistical Manual of Mental Disorders (DSM) in the 70s, so too now the paedophilia rights crowd are working on the APA.

Says Gilligan, “After a fierce battle in the American Psychiatric Association (APA), which produces it, a proposal to include hebephilia as a disorder in the new edition of the manual has been defeated.” He explains in detail the battle over this, and concludes:

Perhaps the most controversial presentation of all was by Philip Tromovitch, a professor at Doshisha University in Japan, who stated in a presentation on the “prevalence of paedophilia” that the “majority of men are probably paedophiles and hebephiles” and that “paedophilic interest is normal and natural in human males”. O’Carroll, the former PIE leader, was thrilled, and described on his blog how he joined Prof Tromovitch and a colleague for drinks after the conference. “The conversation flowed most agreeably, along with the drinks and the beautiful River Cam,” he said.

The push to normalise and make fully acceptable homosexuality is largely over. We are now witnessing before our very eyes the exact same attempt to normalise paedophilia and to make it fully acceptable. Will we sit back and do nothing, as we so often have done in the past, or will we now finally wake up and fight this with all our might?

Oh, and the next time someone tells you there is no slippery slope, you can tell him to take a hike.