The lefties are experts in at least one area: name-calling. They have perfected the art of calling their opponents names, of slinging mud, and of serving up lavish amounts of ad hominem attacks. That is how they “argue”. So bereft are they of any actual ideas, facts and truths, that they have resigned themselves to just calling people names.

They cannot win the war of ideas because they have no ideas – at least ideas of any substance. They have plenty of bad ideas of course, which no sensible person would embrace, so in order to push their radical agendas they resort to the same old tactic: demonise any and all opponents by name-calling.

Calling others names is how the left “argues”. It has become their only means of getting their views across. That alone tells us all we need to know about the poverty of their thought and the paucity of their intellect. And their name-calling goes arm in arm with lie-telling.

We have had yet more outstanding examples of this recently. Let me briefly highlight just a few. At the recent World Congress of Families conference the loony left was out in force, with all their incredible banners and signs, completely filled with name-calling and attacks on the truth. I wrote it up here at the time: billmuehlenberg.com/2014/08/30/wcf-freedom-and-democracy-versus-the-fascists/

There were all the usual screaming protestors there, telling us we were all a bunch of racists and sexists, etc. So utterly boring and so utterly predictable. One classic case of lying for the cause was one female activist interviewed by a MSM TV crew, who actually said we were a bunch of racists and sexists who believe that all women should be chained to the kitchen and never leave home!

Just make up anything you want and blurt it out. Truth means absolutely nothing to these folks. Our recent March for the Babies was also another clear case of this. Once again, the same rent-a-crowd was there, with the same stupid banners decrying racism, sexism, and so on. I wrote it up here: billmuehlenberg.com/2014/10/11/when-love-and-hate-collide/

As I mentioned in that article, the pro-death crowd was handing out a leaflet claiming that all of those involved in organising this march – including myself, even though I had nothing to do with organising it – were in fact “white supremacists”!

Once again we have a perfect example of how the left operates; tell outright and blatant lies, with zero regard for truth, and throw out the same old canards about sexism, racism, and so on. They have no arguments. They have no facts. And they have no brains it seems. So they simply throw out words like “racism” over and over again, hoping the mud will stick. 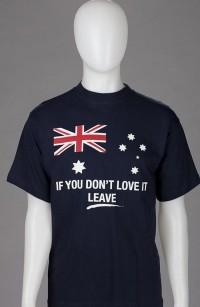 This is how they operate.

My final example of this is also a classic. You would have heard that Woolworths had patriotic shirts which were labelled “racist” by the loopy left and the Greens’ MP Adam Bandt. As a result of this idiotic campaign, they were actually pulled, even though the overwhelming majority of Australians think this is madness. As one media report opens:

Nearly ninety per cent of Daily Telegraph readers have condemned a social media campaign to drive patriotic shirts out of Woolworths. In a poll conducted on The Daily Telegraph’s website, the overwhelming majority of 8000 readers (as of 8.45am today) voted that the singlet tops were not racist. The backlash against Woolworths over the “accidental” stocking of the shirt promoting Australia has been described as “hypocritical” by a -government MP.
The supplier of the singlet — which sports the Australian flag and the words “If you don’t love it, leave” — also expressed concern over social media criticism of the shopping giant. Only two Woolworths stores, in Cairns and Sydney, sold the singlets and all stock was removed on Monday. Baulkham Hills MP David Elliott, parliamentary secretary to Premier Mike Baird, said he failed to see how the singlet could be labelled racist — a claim made by left-leaning critics — given that it appears to promote Australia.

This is such utter moonbattery. How in the world does a shirt urging us to love this great country in any way equal racism? What does race have to do with anything? But this is the typical kneejerk reaction of the left: brand anything they don’t like as racist, and force others to submit to their coercive agendas.

Fortunately some level-headed voices can be heard about all this nonsense. Miranda Devine for example said this:

The self-appointed tolerance tsars of Australia are having such a hard time proving Australia is a land of bigots they are now jumping at shadows. They see racism where most people see patriotism. They cry Islamophobia where there is none to be found. They hear dog whistles that never sounded. They are obviously losing their collective minds.
Take the “racist singlet” furore whipped up by Greens MP Adam Bandt. “If you don’t love it, leave” says the caption under an Australian flag emblazoned on a blue singlet sold at Woolworths. Nothing racist about that. It’s a call to patriotism. It’s also a message to whingers to stop complaining and do something positive about their situation. What could be more Australian? But to some warped people, even the flag is racist.

The truth is found in a beautiful video released last week by the Macquarie University Muslim Students’ Association. Billed “Muslim hate”, it was made as a social experiment to see just how Islamophobic Australians are. An actor posing as a bigot goes out onto the streets to harass and insult Muslims — women in hijabs and a boy — and the public reaction is filmed. In every case, passers-by stepped in and defended the victim. “Hey leave her alone”. “Back off mate”. “You’re [the one] not being Australian.” “How dare you treat him like that”.
The filmmaker has said he was blown away, that nowhere in the world has this happened. The truth is that Australia is the most successful immigrant nation in the world. There is no tolerance for people who abuse others, for whatever reason. So shame on those who slander this big-hearted country. It’s not a singlet causing division, but them.

And Andrew Bolt reminds us of some words spoken years ago by the then Federal Treasurer Peter Costello:

What I’ve said is that this is a country, which is founded on a democracy. According to our Constitution, we have a secular state. Our laws are made by the Australian Parliament. If those are not your values, if you want a country which has Sharia law or a theocratic state, then Australia is not for you. This is not the kind of country where you would feel comfortable if you were opposed to democracy, parliamentary law, independent courts and so I would say to people who don’t feel comfortable with those values there might be other countries where they’d feel more comfortable with their own values or beliefs.

Quite so. And there is nothing racist about that of course. Islam is a religion and a political ideology. It is not a race and has never been a race. But don’t let facts and truth get in the way of the left’s favourite pastime: name-calling and lie-telling.