The Bible is crystal clear about the unnatural and sinful condition of homosexuality, and it also tells us why those in this lifestyle surround themselves with lies and deception. Lifestyles of unrighteousness and rebellion always result in a rejection of truth.

This general point is expressed well in Hebrews 3:13 where we read about “the deceitfulness of sin.” And Romans 1 absolutely nails this, leaving us in no doubt why sin and deception are so intimately connected. In Romans 1:18 we find this: “The wrath of God is being revealed from heaven against all the godlessness and wickedness of people, who suppress the truth by their wickedness.”

And in verses 24-27 Paul gives his primary example of this very thing: the sin homosexuality. In v. 25 Paul states that they “exchanged the truth about God for a lie”. Again we find the clear connection between immorality and the suppression of truth. 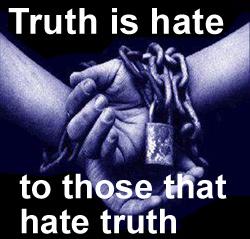 That is why, when you deal with people flaunting their sinful lifestyles in general, and homosexuality in particular, you will find that lies and deception characterise what they say. They hate the truth, suppress the truth, and exchange the truth of God for the lies of the enemy.

The savage and twisted attacks on the last two books of my three books on this subject are a clear example of this. These two volumes contain well over 1200 references, with many hundreds of them direct quotes from homosexual books, homosexual magazines, and so on.

Yet the activists still reject everything I have to say there. I quote from homosexuals themselves, and they still go ballistic, and seek to attack me. That is because they have hardened themselves against truth, because they prefer living a lie and indulging in their immoral lifestyles.

And so when one of their own comes out and seeks to be a bit honest here, they go absolutely nuts. A new article by an American homosexual is proof of this very thing. In “Why I No Longer Want To Be Gay” Luis Pabon dares to tell it like it is. For daring to do so, his buddies have turned on him big time.

I no longer want to be gay. I know that on the surface this statement reeks of the denial, self-loathing and internalized homophobia commonly associated with accepting and integrating ones gayness but truth is, I just don’t want to be gay anymore. It has outlived its usefulness. I have experienced all aspects of the life and can safely say that it no longer speaks to the person that I am or want to become. I didn’t always feel this way.
Initially I came to this community searching for love, intimacy and brotherhood. In return, I got shade, infidelity, loneliness and disunity. The self-loathing in this community forces you to encounter a series of broken men who are self-destructive, hurtful, cruel and vindictive towards one another. I have struggled to adapt my moral code to fit the behaviors concomitant with the lifestyle but it seems that the lifestyle is forcing me too far away from everything I love and value. No matter how many times I try to purge my perception of its firmly held beliefs and skewed biases, the same classic stereotypes of gay men keep rearing their ugly heads. The indiscriminate sex, superficiality, unstable relationships, self-hatred, peter pan syndrome, closeted connections, ageism, shade, loneliness, preoccupation with sex, prejudice, aversion to intimacy all seem to come out of the ground I thought they were buried under. Gay men just seem to find it difficult to transcend the stereotypes and clichés attached to the life and it is becoming disheartening….
I am too young to long for the good old days but this life makes you miss what it meant to be gay. It makes you long for the times when a guy would greet you and offer you a drink as opposed to his cock size and sexual stats. The middleman of courtesy has been eliminated and replaced with an immoral devil who chaperons your destruction daily. It just isn’t worth it anymore. And while I recognize my attractions to men, I choose to no longer associate myself with a life that lives outside of morality and goodness. The gay life is like the love of a bad boy whose attention and love you initially covet but eventually outgrow. It’s just not where I see myself anymore.

That is some testimony. And one simply has to read all the hate-filled and utterly diabolical comments under the article to see just what I have been saying. He has committed the greatest heresy: to actually admit that this is a sordid, perverse and decadent lifestyle.

The only people the homosexual militants hate more than a guy like this are those who have fully left the lifestyle. They utterly detest such people. One such ex-homosexual is Andrew Comiskey. He has had his life turned around by Jesus Christ and he too is concerned about all the lies and deception – even as found in too many churches today.

A western citizen is today considered ‘enlightened’ if (s)he embraces homosexuality as inborn and unchangeable, its expression worthy of all privileges accorded marriage and family. For upholding marriage, and disagreeing with the ethical good of ‘gay’ practice, that same citizen is judged at best as ignorant and worse as a bully, a bigot, and a ‘hater.’ Criminal charges may apply: anyone not on the ‘gay’ bandwagon will lose reputation and may lose his or her business for not cooperating with ‘gay’ weddings.
Seeking relevance, the Church at large has been reduced to silence then slow concession to what is a fierce yet well-cloaked ‘gay agenda.’ (I have witnessed this ‘agenda’ since I came out of homosexuality in the late seventies: even then, it was apparent that wealthy gay politicos were aiming at the gold ring of ‘gay marriage.’) The tactic is simple and goes something like this: “‘Gay’ people are loving and wounded. How can we further wound them by not giving them what they want? We believe in the pursuit of happiness for all, don’t we?” Seeking to be ‘loving’, the Church bows to such superficial questions with superficial answers.

The new enemy of the Church’s clear understanding of sexual humanity is ‘nice.’ Without doubt, many persons with same-sex attraction (I do not use the language of ‘gay’; it is a socio-political identification that hinders persons from resolving the attraction) are kind and loving and capable of committed friendships. Not the question. The question remains: what is our sexual humanity for? If we as Christians are not clear that the purpose of our engendered self is to mature into whole-enough gifts for the other so that we can create new lives together, then we have lost our way. We do no-one any favors to alter the boundary lines to include sexualized same-gender friendships, just as we did an earlier disservice by accommodating extramarital sex on the basis that ‘Christians do it anyway.’
Our young interns and I recently studied ‘The Bible and Homosexual Practice’ (Abingdon Press, Dr. Robert Gagnon), the best and most scholarly approach to the subject. Without doubt, Scripture from start to finish prohibits all homosexual acts on the basis that gender ‘discomplementarity’ is an act of treason against God and one’s fellows. Period. Our ‘loving’ hearts deceive us. An ‘agenda’ has deceived us. A common enemy has deceived us.
It may be too late for our nation to take marriage back from that agenda. But Jesus Himself will not allow His bride to be deceived. We must wake up and repent. It is not too late to forsake our ‘nice’ concession to ‘an enemy who came only to steal, kill, and destroy’ lives. (John 10:10) In concert with the One who came that ‘all may have life and have it to the full’ (John 10:10), let us open wide the doors of our hearts and churches and provide a merciful womb in which all may repent of the deception that is destroying them.

So here we have two individuals, one daring to be honest about his lifestyle, and the other daring to confront the lies in our churches. Truth is paramount in both cases. And it is truth that must be championed here if we really want to help people. Jesus made this perfectly clear when he said: “You will know the truth and the truth will set you free” (John 8:32).

Whether the issue is homosexuality or whatever, we are in desperate need of truth-telling.

15 Replies to “Truth, Lies and Homosexuality”