By now all of you would have heard at least a thousand times from our dhimmi media about the Twitter hashtag of #Iwillridewithyou. Every other minute the media dunces remind us of this campaign, supposedly to help assuage the fears of panicked Muslims who are evidently already packing their bags to ship out of Australia to avoid the daily lynchings, firebombings, and burning crescents by enraged whities. 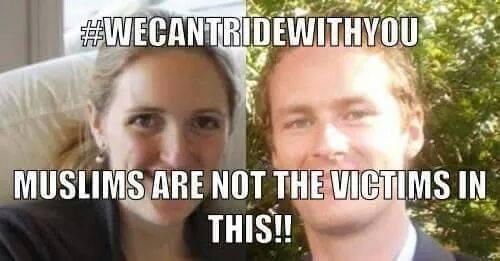 At any moment millions of demonised Australians are supposed to launch an all-out assault on the poor beleaguered Muslim community. Evil Aussies will any second now unleash WWIII on all these innocent Muslims. At least that is how the leftist media narrative goes.

Thus all the mass hallucinations with the Twitter campaign. But as Chris Kenny says about it: “Nice thought. Except it was an empty response to an imaginary problem.” He continues:

And in the real world, at that time, innocent lives were in the balance. This was political correctness on steroids as people distanced themselves from a possible Islamophobic backlash to an act of Islamist violence still unfolding. We understand the lurch for an empathetic embrace but it ignored and demeaned the harsh reality.
No doubt across the nation most people would have been preoccupied with the fate of the hostages. But while social media is self-selecting and introspective, it also plays strongly into mainstream media. So we saw a grotesque turning away from the horrific plight of innocent people in real peril to focus on empathy for Muslims in our midst who faced no threat.

The Martin Place siege was a callous and life-threatening episode, and focusing on possible future personal abuse on public transport seemed a trite miscalculation. There would be time enough to deal with consequences — afterwards. And the suggestion that mainstream Australians would indulge in an Islamophobic backlash smacked of leftist self-loathing — with the awful implication that the heinous actions of a gunman were somehow linked to our bigotry.
Worse still, this melds into the narrative of Muslim victimhood. Islamist terrorists rely on such grievances; the woes of the Muslim world are blamed on the West and violence justified as a response to persecution (even when the ultimate aim is Islamic supremacy through a caliphate). In this respect (and clearly not deliberately) a social media campaign aimed at harmony echoed the Muslim victimhood claims being made in Martin Place.
In a security and ideological struggle set to last many decades, such arguments matter. When extremists target us because of our values, we ought to stand up for them rather than demean ourselves.
In this country, Muslims are not victims. By and large, our fellow citizens are inclusive and tolerant.
And while, sadly, every society sees individuals and incidents of prejudice, few nations can match our plurality and harmony. We saw this unfold in Melbourne yesterday when a Muslim woman was heckled on a train but, of course, was defended by her fellow Australians. No hashtag required. We should talk up our robust tolerance, not undermine it.

Expert on Islam Robert Spencer put it this way:

An hour and a half ago I wrote this: “There will also be a heavy barrage of ‘backlash’ stories — indeed, they have already begun.” And a bit before that: “The pattern never changes: in the wake of a jihad terror attack or plot, Muslims in the West do not do what they should do: redouble their efforts against jihadis in their own communities, and their cooperation with law enforcement officials. Instead, they claim that they are being victimized by a ‘backlash’ and try to seize the spotlight as victims.”
The mainstream media aids and abets this. Reuters here has nothing at all: two protests that didn’t happen, a hearsay report of a woman who was spat upon, and one man saying (quite correctly) that “there is no moderate Islam.” Where are the Reuters stories about what Muslims are doing to teach against the beliefs and attitudes that give rise to so much violence committed in the name of Islam and — according to those who perpetrate it — in accord with its teachings? Where are the Reuters stories about what Muslims are doing to reassure Infidels, instead of the other way around, in the wake of yet another jihad attack? Yes, the Muslims in Australia condemn this attack. Very well. What are they doing to prevent Muslims from reading Qur’an 47:4 as a justification for taking hostages? What are they doing to reform Islamic teachings so that no violence is ever done in accord with those teachings?
And the answer is nothing, except to shine a spotlight on themselves and proclaim, We are the real victims. No innocent person, Muslim or non-Muslim, should ever be attacked or brutalized or spat upon, etc. But this Reuters report is grotesque: a Muslim, acting explicitly in the name of Islam, just held a group of non-Muslims hostage for hours, terrorizing them, and at least one other person besides him is now dead because of his actions. Instead of writing about what the Muslim community can and should be doing to prevent this, we get yet another in an endless parade of backlash stories — with the intended effect of deflecting scrutiny away from the really important questions. After all, if saying “there is no moderate Islam” is a sign of a backlash, there can never be the needed public discussion about whether or not there really is a moderate Islam, and what should be done to deal realistically with the jihad threat.

I for one have had just about all I can take of the constant media mantra about fears of a backlash against Muslims whenever they are going about their daily duty of massacring the infidels. Enough already. Columnist Mark Steyn also speaks to this:

Usually the Muslims-fear-backlash crowd at least waits till the terrorist atrocity is over. In this case the desiccated multiculti saps launched the #I’llRideWithYou campaign even as the siege was still ongoing – while Katrina Dawson and Tori Johnson were still alive. Muslims are not the victims here. Ms Dawson and Mr Johnson are the victims.
And yet the urge to usher Muslims into the victim chair and massage their tender sensibilities is now so reflexive the narcissists on Twitter don’t even have the good taste to wait till the siege is over and the corpse count is known. Far from a restoration of faith in humanity, it’s a glimpse of how advanced the sickness is. For good measure, Bill Shorten, Leader of the Opposition, threw in the usual smug moral preening: “Australians tonight doing what we do best – uniting to overcome intolerance and hate #illridewithyou”.

He finishes by quoting Laura Rosen Cohen who says:

It’s ALWAYS ABOUT THEM. Muslim terrorist holds people hostage in cafe, entire world worries about imaginary “backlash” against Muslims. I’m sorry, I’m a little more concerned about the hostages. Screw the imaginary backlash and all its pedlars.

30 Replies to “Jihad and ‘Backlash’ Baloney”