I have already penned two pieces on the SCOTUS decision to redefine and destroy marriage. I have looked at the very real implication for marriage, family and society, for the well-being of children, for religious freedom, and so on. I have quoted a wide-range of people on how this decision will adversely impact on all of us.

But those of us who are Christians must think carefully and prayerfully about the biblical, theological and spiritual implications of all this. In many ways we are now in uncharted territory. Or, more specifically, we are now in a place that we have not been for a very long time: the place of being a persecuted minority in a hostile environment.

We are much like the early church. Now we have to start afresh. We have to evangelise anew, disciple anew, and once again work for things like the proper understanding of marriage and family. All these battles were fought before, but now we are losing it all.

There are other spiritual truths we need to keep in mind here. Here are just a few of them:

This is ultimately a spiritual battle

Behind all the political, legal, social, cultural and ideological battles being fought here, there is an underlining reality: this is a spiritual battle and this decision comes straight out of the pit of hell. We are only fooling ourselves if we think this fight will be won by more money, more activism, more lobbying, or more political action groups – not when we 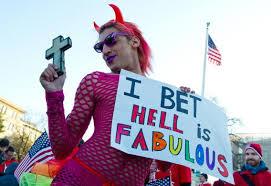 are fighting the very demons of hell.

Now don’t get me wrong: all these things and more are vitally important, and we must engage at all levels. But the fundamental battle is being waged in the heavenlies, and unless we are fully right with God, shod with his armour, and girthed in prayer and spiritual warfare, we will never succeed.

This decision, as horrific as it was, did not catch God by surprise. God has not stopped being sovereign and in control. His plans have not been thwarted, and he will one day return to bring just judgment at all those who shake their fists at him now, and think they can get away with it.

This has been a tremendous setback to the causes of faith, family and freedom, but it is not a setback to the ultimate outworking of God’s purposes. He will accomplish what he has set out to do. He has not stopped working, just because these five impudent judges have defied him and his will.

But knowing all this should never result in a fatalistic resignation: ‘Well, God is in control so I won’t sweat it. Que sera, sera.” No, his sovereignty does not take away our human responsibility. We have a battle on our hands and we must continue to fight. This is not the time for passive submission but courageous resistance.

Indeed, I have no time at all for those believers who jump for joy every time an evil event like this occurs and glibly proclaim, “Oh goodie, things are getting worse, so that means the Lord must be coming at any moment!” We should never rejoice when evil occurs, but be grieved in our spirits.

And even if he does come soon, we are told to occupy till he comes. We have work to do, and I disavow any selfish fatalism or irresponsibility in which believers just opt out of the battles and sit around with their bags packed, waiting to be called home.

We need God’s heart on this

I was still a relatively new Christian when SCOTUS handed down its demonic abortion decision in 1973. Had I been a bit more spiritually, morally and politically in tune, I would have grieved heavily then, as I am right now. My grief at the moment is so very heavy and palpable.

How must God feel as he witnesses such blatant rebellion, immorality, idolatry and wickedness? He has every right to judge America fully now. The words of R C Sproul sure ring true here: “God’s grace is not infinite. God is infinite, and God is gracious. We experience the grace of an infinite God, but grace is not infinite. God sets limits to his patience and forbearance. He warns us over and over again that someday the ax will fall and His judgment will be poured out.”

Since Romans 1 speaks of homosexuality being both a grievous sin, as well as God’s punishment on those who resist the truth in unrighteousness, we can say the same here: this decision was sin compounded, but it may also be an act of God’s judgment on a nation which has spat in God’s face and rejected him and his law. But even if it is his judgment, that does not absolve us to keep working for righteousness and Kingdom values.

We need to repent

There is only one thing worse – far worse – than the diabolical SCOTUS decision: the fact that probably most Christians don’t know about it or care about it. Our damnable apathy, callousness and indifference was a crucial reason why this deplorable decision went through. We cannot blame it all on the activists.

While there are certainly activist groups working overtime to destroy all that we hold near and dear, we really have brought all this upon ourselves. The churches have been in a sinful sleep, totally oblivious to the culture war raging all around them. Far too many Christians were silent, and worse yet, far too many pastors and Christian leaders said nothing and did nothing about this attack on God’s fundamental human institution of marriage and family.

This is not the end – we still have work to do

The end of the world has not come with this diabolical decision. It may be the end of America as we know it, but it may not yet be the end of all things. God is still at work around the world, and even though the US is going down the tubes fast, great things are still happening elsewhere.

Because most American Christians have slept through the sexual revolution, now their only recourse to remain true disciples of Jesus Christ may be civil disobedience. We must resist bad, anti-Christian laws and stand true for God. This will likely be real costly, but we have no other choice. I make the case for Christian civil disobedience here:
https://billmuehlenberg.com/2008/11/02/christians-and-civil-disobedience/

Let me finish with a few thoughts from John Piper:

My main reason for writing is not to mount a political counter-assault. I don’t think that is the calling of the church as such. My reason for writing is to help the church feel the sorrow of these days. And the magnitude of the assault on God and his image in man.
Christians, more clearly than others, can see the tidal wave of pain that is on the way. Sin carries in it its own misery: “Men committing shameless acts with men and receiving in themselves the due penalty for their error” (Romans 1:27).
And on top of sin’s self-destructive power comes, eventually, the final wrath of God: “sexual immorality, impurity, passion, evil desire, and covetousness, which is idolatry. On account of these the wrath of God is coming” (Colossians 3:5–6).
Christians know what is coming, not only because we see it in the Bible, but because we have tasted the sorrowful fruit of our own sins. We do not escape the truth that we reap what we sow. Our marriages, our children, our churches, our institutions — they are all troubled because of our sins.
The difference is: We weep over our sins. We don’t celebrate them. We don’t institutionalize them. We turn to Jesus for forgiveness and help. We cry to Jesus, “who delivers us from the wrath to come” (1 Thessalonians 1:10).
And in our best moments, we weep for the world, and for our own nation. In the days of Ezekiel, God put a mark of hope “on the foreheads of the men who sigh and groan over all the abominations that are committed in Jerusalem” (Ezekiel 9:4).
This is what I am writing for. Not political action, but love for the name of God and compassion for the city of destruction. “My eyes shed streams of tears, because people do not keep your law.” (Psalm 119:136)