I was in Canberra yesterday, even in Parliament House, as Malcolm Turnbull was engaging in his act of treachery and back-stabbing. He called for his spill just moments after a group of us Christians left the building after a time of meeting with politicians, prayer and worship.

Maybe there is a bit of spiritual imagery there: God’s people leave, and evil comes in like a flood. But I will discuss spiritual reflections on this a bit later. Here I simply wish to make a few brief and obvious political observations. The spill was successful, with a 54 to 44 vote for Turnbull. Julie Bishop was chosen as Deputy Leader over Kevin Andrews, 70 to 30. Here are a few basic truths about this back-stabbing: 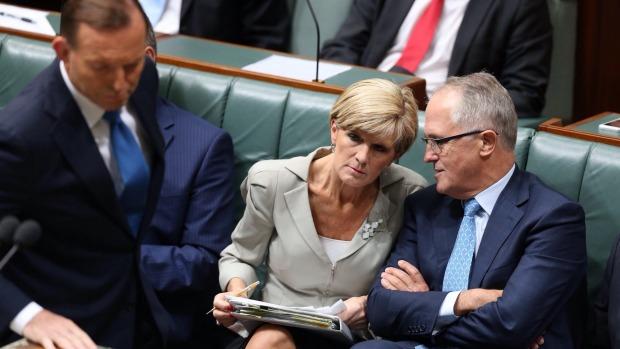 -The people of Australia of course voted for Tony Abbott, not Malcolm Turnbull. He had absolutely no mandate to do what he did.

-We now have an arrogant, self-serving, power-hungry, and altogether selfish politician with little or no conservative principles running our major conservative party.

-The Liberals are now as bad as the traitorous and back-stabbing Labor Party. The instability and leadership spills make them look just as odious as when Rudd, Gillard and Shorten were doing their worst.

-Turnbull should have been booted out of the Coalition years ago. He would make a great Labor Party hack, but he has no true conservative values. He is pro-homosexuality, pro-abortion, pro-carbon tax, and so on. He is bad news, and the antithesis of everything the Liberal party should be about.

-Shame on Julie Bishop for betraying her leader, and doing all she can to out-do Julia Gillard. She needs to hang her head in shame, not gloat in her evil treachery and treason.

-This act of treachery will leave the party divided for years, and simply make it easy as pie for Labor to win upcoming federal elections.

-Now all the lousy agendas which Abbott worked so hard to resist will likely just roll on through – things like homosexual marriage and the globalist climate change agenda. The fact that the mainstream media and the Left have always taken so kindly to Turnbull should have been warning enough to us all.

-When homosexuals, Muslims and the lamestream media all get excited about a new Liberal leader, you know for a fact that we have the wrong leader.

-This spill has not only left many Liberal Party politicians utterly disgusted, but millions of ordinary Liberal party voters as well. Where will they now turn?

-Smaller parties or independent candidates might increase and benefit in the future because of this, but that will likely only mean more success for Labor and the Greens.

Andrew Bolt sums things up well: “Here’s Turnbull’s challenge in a nutshell: he stole the prime ministership he could not have won in an election. He stole it by boasting of superior communication skills he does not have. He will now campaign on successes by Abbott he could not have achieved himself. And he will now be the leader of a party he cannot unite.”

Perhaps one of the best commentaries on the reasons why the move was on to dump Abbott is this slightly older video by Lord Monckton. It is only 3 ½ minutes long and well worth watching and sharing. In it we hear why Turnbull was so desperate to get Abbott out before the United Nations’ Climate Change Conference in Paris on November 30 – December 11:

Even more important of course are the spiritual realities behind all this. It is Satan who comes to kill, to steal and to destroy. He seems to have gotten Turnbull to do all three to the Liberal Party, to the electorate, and to the nation.

Now we have two godless leaders in the Liberal Party. Neither Turnbull nor Bishop have any Christian bones in their body. They are all about securing power at all costs, and morality and spirituality seems to mean nothing to them. So we have godless leaders running the Liberal party, doing their best to alienate all the conservatives and Christians who remain in it.

Christians may well have little choice but to pull out of this Party and support the smaller Christian parties. Never ending compromise and capitulation is never going to work, and at some point we may well have to wipe our hands of the major parties altogether.

However we must look to some spiritual truths here to sustain us in times of great despair and discouragement. I know millions of Christians and conservatives are right now in a time of real grief, despair and anger. But for the believer, we must always have the divine perspective on things.

And two little words often found in Scripture are what we must cling to here: “But God…” That is always our hope – our only ultimate hope. If it were not for God, and his intervention, we would all be of men most miserable. But God… He is still working out his purposes, and he has not been defeated in his overall plans and aims.

In my daily reading this morning some passages out of Hosea jumped out of the pages:

Put the trumpet to your lips!
An eagle is over the house of the Lord
because the people have broken my covenant
and rebelled against my law.
Israel cries out to me,
‘Our God, we acknowledge you!’
But Israel has rejected what is good;
an enemy will pursue him.
They set up kings without my consent;
they choose princes without my approval.
They sow the wind
and reap the whirlwind. (Hosea 8:1-4, 7)

Yep, these acts of treachery are the work of Satan, and we are asking for, and getting, trouble – big time. But as I wrote four days ago, we still need to see the bigger picture here, and realise that God is ultimately still on the throne. I wrote then about the great themes found in the book of Daniel and I said this:

This is good news indeed and well worth keeping to the forefront as we deal with increasingly hostile and anti-godly governments and world systems. As we read in Daniel 2:44-45: “In the time of those kings, the God of heaven will set up a kingdom that will never be destroyed, nor will it be left to another people. It will crush all those kingdoms and bring them to an end, but it will itself endure forever. This is the meaning of the vision of the rock cut out of a mountain, but not by human hands – a rock that broke the iron, the bronze, the clay, the silver and the gold to pieces.”

That is our one true hope – all the kingdoms of the world, all the evil rulers of this world, will soon enough come to a speedy end, and the one true King will rule forever. So let us not despair at this deplorable turn of events. God is still on the throne, and he is working out his purposes.

Keep the faith my friends. Yesterday was a bad day. But it is not the last word by any means. In the meantime we need to work even harder and pray even more. So allow the grieving process to work if need be, but then back on your feet – we have work to do.

66 Replies to “Thoughts on the Turnbull Treachery”