It is imperative that we get it right on Islam, because if we don’t we are all goners. And there have been far too many Western leaders, opinion makers and ruling elites who have failed time and time again to get it right. Examples of this are as numerous as they are worrying.

Consider this recent exchange with a dhimmi Liberal Senator and Andrew Bolt:

Bolt: Why is Malcolm Turnbull — and Julie Bishop and Andrew Scipione — calling what happened politically motivated violence when the boy was shouting “Allah” when he shot the unfortunate police accountant?
Fierravanti-Wells: Well, Andrew, I think the Prime Minister today … referred to it as politically motivated and then said “and that’s terrorism”.
Bolt: Yes, the word that is missing here is “religious”.
Fierravanti-Wells: Well, Andrew I think there will be things that are going to come out as part of the inquiry …
Bolt: I find it amazing that … the Government keeps calling it a politically motivated attack and not a religious one and I just want to know why.
Fierravanti-Wells: I think, Andrew, that this is an ongoing investigation … Look, there is no doubt that the motivation is a very important issue. People want to know what motivates a 15-year-old boy to walk down a street …
Bolt: Shouting “Allah”.
Fierravanti-Wells: … shouting whatever he is alleged to have shouted.
Bolt: You see, you can’t even say what he is alleged to have shouted. He shouted “Allah”.
Fierravanti-Wells: He shouted what he shouted and did this and it is really important that we do understand what is the motivation.

Get the impression the Government actually has no interest in the motivation if it’s Islam? 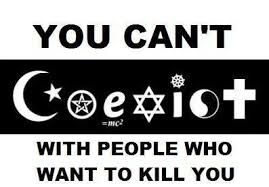 Shocking stuff. So many of these folks are clueless wonders and dhimmi dunces who would rather be politically correct than protect their nation and its values. However in the past few days some of these leaders have made a few worthwhile statements.

Whether they are too little too late is a moot point. Indeed, after years of making excuses for Islam and the terrorists, their newfound firmer voice may not be of much help. But I will mention them briefly anyway. Consider the new Australian Prime Minister: another jihad attack on Australian streets has given him a slight bit of nerve it seems:

Malcolm Turnbull says anyone who cannot abide by the core Australian value of mutual respect should leave the country. In a passionate speech in the wake of a terror attack in Sydney in which a 15-year-old shot dead a police worker, the Prime Minister said violent extremism needed to be tackled head on.
He said those who could not practice harmony should leave the country. “It is not compulsory to live in Australia. If you find Australian values, you know, unpalatable, then there’s a big wide world out there and people have got freedom of movement,” Mr Turnbull said.

David Cameron yesterday launched a blistering attack on the ‘passive tolerance’ of Islamist extremism and a failure to integrate that has put Britain ‘in danger’. The Prime Minister said there were parts of the UK where ‘you can get by without ever speaking English or meeting anyone from another culture’, and announced new powers to close down religious schools, or madrassas, which children attend before or after school.
To loud applause at the Tory conference, Mr Cameron warned: ‘For too long, we’ve been so frightened of causing offence that we haven’t looked hard enough at what is going on in our communities. This passive tolerance has turned us into a less integrated country; it’s put our children in danger. It is unforgiveable.’ The ‘shadow of extremism is hanging over every single one of us’ and the fight to defeat it was a ‘fight for our existence’, he said.

Yes of course. But he should have been saying all this years ago. And a few others have the courage to speak a bit of truth here. One Labor Party man, Mark Latham – who by the way would probably make for a better conservative leader than Turnbull – was not shy in stating the obvious:

Controversial former Labor leader Mark Latham has claimed that Western Sydney “has got a Muslim problem”, attracting criticism from other panellists on The Verdict. Mr Latham claimed that the region’s Muslim communities had a “serious cultural welfare dependency” issue.
“You’ve got to face the reality that there’s now a serious cultural welfare dependency in the Muslim communities in Western Sydney,” Mr Latham told the panel. “It started with the family reunion – or unskilled migration program in the 1980s. There’s whole suburbs, such as Auburn, Lakemba, areas around Parramatta, where you’ve got young people who aren’t in meaningful work, who aren’t involved in meaningful work.”
Mr Latham claimed that the “idleness” had led to serious problems. “One of the issues for ASIO is to monitor groups where these young fellas sit around bitching about Western culture,” he said. He called for an end to welfare dependency through employment, and a possible “break” for Western Sydney in terms of migration.

Yep. But very few politicians are willing to state the obvious. Thankfully a few columnists are. One is Miranda Devine. She was less charitable than I about the recent Turnbull remarks:

Malcolm Turnbull was at it again on Friday, patronising ordinary Australians. After a week refusing to talk about the terrorist attack on NSW police HQ in Parramatta, the Prime Minister held a press conference in which at least he called the murder of police accountant Curtis Cheng by a 15-year-old Muslim gunman “religiously motivated” — though he couldn’t bring himself to specify a particular religion.
But then he was back to lecturing us about tolerance, commanding us to engage in “mutual respect”. Presumably he still has in mind the fabled Islamophobia backlash that never seems to materialise.
We’ve had three terrorist attacks on home soil in the last year, resulting in the deaths of three innocent Australians and serious injury to two police officers, not to mention the curtailment of our freedoms and a sense of foreboding that is now the backdrop of any public event.
Police and military personnel are under such threat they have been told not to wear their uniforms in public. Journalists have had to move house or beef-up security due to Islamist intimidation. It’s now commonplace for camera crews to be physically assaulted by family members or supporters of Muslim defendants or suspects outside court. This is the new normal.
Despite this assault on our way of life, there are no Islamophobic rampages. That is all a fantasy of moral poseurs, who reveal their own bigotry against ordinary Australians. Perhaps because they live in privileged inner-urban mono-cultural enclaves like the PM’s unrepresentative electorate of Wentworth, they don’t realise that Australia is probably the most harmonious multicultural nation in the world.

Here is some simple truth – truth which most of our leaders and media elites fail to grasp: If we wish to survive as a nation, then we must take seriously known threats against us. When groups say they intend to kill us and enslave us, then we had better take them seriously.

The first step in protecting our nation and our way of life is to identify – and name – the enemy. If we are so gutless and clueless to refuse to take this most basic of steps in national survival, then we probably deserve to lose it all. But I for one will not go down without a fight.

And when necessary, I will always use the “M” word and the “I” word.

5 Replies to “Getting It Right on Islam”