I’m offended. Offended by people who try not to give offence. You see, the offence industry is upon us like a plague, and it hurts everything and everyone it touches. In our PC days, it seems that everyone is whining about being offended. No matter how hard you try, folks will complain that you have offended them about something.

And in the West we are aiding and abetting this madness by enacting ridiculous laws about vilification and so on, which basically makes it a crime to offend somebody. Homosexual activists and Islamic groups are among the major bodies pushing for such legislation. 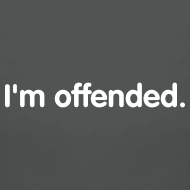 We read just recently about a Muslim group saying that they find it offensive to have to sing Australia’s national anthem. Well, I have news for these guys: if the values and beliefs as represented in the anthem are so offensive to you, why hang around? No one is forcing you to stay here.

If these folks want to go back to their Islamic hellholes where freedom, democracy and the rule of law are non-existent, that is up to them. But if they choose to come here, then they should learn to accept Australian values and our way of life.

But the real problem is when Christians start getting into this game of not wanting to offend anybody. Believers can be real dolts when it comes to embracing the secular trendy fads, including political correctness and false notions of tolerance and acceptance.

In a recent article I wrote about how some Australian churches are doing just this. I said this: “The leftist open slather asylum seeker welcome group #walktogether has been joined by various churches, including Riverview Church in Perth, of which it says, ‘Riverview Church sent a delicious message to anti halal meat scaremongers.’ It had a halal sausage sizzle to show how into diversity and acceptance it was.”

Since posting that article I have heard so much nonsensical mush from Christians on this topic that I sometimes wonder if Christians have lost the ability to actually think straight. The number of bizarre and totally irrelevant objections and criticisms being raised have left me reeling.

For example, some of these rather confused Christians have said that we believers must feed the poor! Um, what does that have to do with anything? These were snacks being given out at a middle class church event. This was not a soup kitchen for starving masses.

And even if it were, any number of foods could have been presented. Or are halal sausages the only foods they have to offer? Why even make mention of halal? Given that many Australians are rightly concerned about the halal industry (and no they are not “scaremongers”), this church could have offered all sorts of other food choices.

One has to ask just what were these folks trying to accomplish? It is clear they did not want to offend Muslims. Fine. But why were they not trying to offend and upset Muslims? That is the real question. If it was so that everyone could just merrily get along in one big happy family, in one jolly ecumenical powwow, all singing Kumbaya, then this is not a Christian church, but a bunch of deceived dhimmies and syncretistic idolaters.

But if it was in order to win Muslims for the gospel – which should always be the aim of all true Christians – then they got things wrong big time. Why in the world should they worry about offending them over halal foods when we have far greater things to worry about when it comes to offending Muslims?

So what are you going to do about all that offence? Will you drop all the exclusive truth claims about Christianity in order to not offend Muslims? If so, you again betray yourselves as being false witnesses of the gospel. If not, then I am totally confused by your actions.

There is nothing wrong with trying to make the gospel attractive and palatable – within reason of course. Christian missionaries have always dealt with issues of contextualisation, doing certain things or abstaining from certain things in order to better reach the lost for Christ.

One of the classic cases in point was the missionary work of Hudson Taylor in China. He of course learned the language, but he also was willing to wear the native Chinese dress and even Chinese hairstyles in order to more effectively reach the Chinese.

But these things were never immoral or illegal or biblically unwise, and always were used judiciously and carefully. Nothing of the gospel was ever compromised in such contextualisation, and nothing which was inimical to the faith was embraced.

But in pushing the halal agenda – even for good reasons – one really has to ask if these folks have actually thought carefully about what they are doing. The problems with halal are many of course, especially for the believer. But even if we leave aside issues like meats being offered to idols, we still have the whole extortion tax racket of halal, some of which may well fund Islamic terrorism.

Of course I am not intending to single out just one church here. Regrettably there would be plenty of such churches which are really rather clueless about these matters. These churches should know better. But sadly far too many of them do not. Interestingly, I just read this morning John 6. Let me offer John 6:60-67 here:

On hearing it, many of his disciples said, “This is a hard teaching. Who can accept it?” Aware that his disciples were grumbling about this, Jesus said to them, “Does this offend you? What if you see the Son of Man ascend to where he was before! The Spirit gives life; the flesh counts for nothing. The words I have spoken to you are spirit and they are life. Yet there are some of you who do not believe.” For Jesus had known from the beginning which of them did not believe and who would betray him. He went on to say, “This is why I told you that no one can come to me unless the Father has enabled him.” From this time many of his disciples turned back and no longer followed him. “You do not want to leave too, do you?” Jesus asked the Twelve.

Here we have people being offended by Jesus and his teachings. And this sort of stuff happened all the time in the gospel accounts. The gospel is inherently offensive to sinful man. So whether you are an atheist, a Muslim, or whatever, the truth claims of Christ will always offend.

Indeed, Paul speaks often about the offence of the gospel. It is the nature of the biblical gospel to offend those who are not yet reconciled to God through Christ. While we seek to eliminate any unnecessary stumbling blocks or obstacles that may prevent nonbelievers from hearing and receiving the gospel, we must never water down core biblical teachings in the interests of being non-offensive and inclusive.

Let me conclude by noting where this sort of Christian accommodation can lead to. We see in Europe the same desire by believers to be “nice” and “accepting” and “tolerant”. And as almost always happens with such vacuous notions, it leads to the eventual denial of the gospel itself, or at least to a denial of the need for evangelism. Consider this shocking case:

One of Germany’s largest Protestant regional churches has come under fire from other Christians for speaking out against efforts to convert Muslims just as tens of thousands of refugees from the Islamic world are streaming into the country.
In a new position paper, the Evangelical Church in the Rhineland says the passage in the Gospel of Matthew known as the Great Commission — “Go therefore and make disciples of all nations, baptizing them in the name of the Father and of the Son and of the Holy Spirit” — does not mean Christians must try to convert others to their faith.
“A strategic mission to Islam or meeting Muslims to convert them threatens social peace and contradicts the spirit and mandate of Jesus Christ and is therefore to be firmly rejected,” the paper entitled “Pilgrim Fellowship and Witness in Dialogue with Muslims” argues.
This initiative by the mainline Rhineland church, published in early October, prompted a sharp response from Germany’s small evangelical movement. “We declare firmly that the fundamental missionary task of Christians, namely to preach the Gospel of Jesus to others and invite them to follow it, cannot be given up,” said Hartmut Steeb, secretary general of the German Evangelical Alliance.

I am not saying evangelical churches here are in the same boat. But many may well be on the way. Plenty of mainstream churches are already there, having long ago abandoned the uniqueness of Christianity and the need to share the biblical gospel.

If evangelical churches here are not careful, they too will end up in the same sad place.

10 Replies to “The Offensiveness of Trying Not To Give Offence”