OK, I am writing a piece on something that is still some days away yet. But judging by decades of past performance, I do not have the slightest problem in saying the following. Indeed, I can guarantee that if I waited till next Monday night, saw the program in question, my article would be just the same, barring a few small details.

So what am I talking about here? I am referring to the next episode of the debate show Q&A which is on ABC television each Monday night. Some of you may have heard that the next instalment will feature “Christians”. Some might be saying, “Oh wow, finally Christians will get a hearing on this show”.

Well, before you get too excited about a “Christian” panel on Q&A, let me make you aware of a few facts. First, this is the ABC, and this is Q&A. That means there will be little of anything good to come out of this. I have written so many stories on this frightful network and this frightful program that it pains me to have to do it once again. 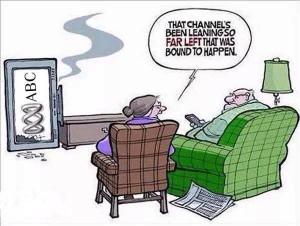 The ABC is a hyper secular left organisation that supports every radical cause, while taking pleasure in bashing Christians and Christianity every opportunity it gets. Ditto, if not more so, for this lousy program. Both have a proven track record of being among the most biased, leftist, anti-Christian media outlets around.

So past history alone tells us all we need to know about how this program will go next Monday night. Indeed, I am writing up my report of it now because we know exactly how it is going to proceed. First of all we have the biased leftist moderator Tony Jones along with an overwhelmingly biased leftist audience, as we have every single week.

There it is: two-zip, even before we begin. So what about the panellists? Five Christians – that has got to be good, right? Um no, not at all. As usual, we have most of them on the left side of politics, pushing all the activist causes, including trendy lefty issues like homosexual marriage, and only a minority who are conservative. This time, perhaps feeling guilty of their usual deck-stacking, they have not just one sole conservative voice, but two.

But this is par for the course for “our” ABC and so much of the mainstream media. It offers a pretence of “balance” and “fairness” by having one, and just maybe two, conservative voices to stand against all the others. And all of us taxpayers are funding this despicable bias and intellectual treachery.

So let me run through the five Christian panellists. As mentioned, we have only two who actually uphold traditional Christian teachings on most issues. Lyle Shelton of the Australian Christian Lobby has been on before, and he will seek to calmly and rationally defend biblical Christianity against all the other radicals and activists.

John Haldane is a Scottish Catholic intellectual. He is a philosopher and Thomist, who has written important books such as his 2010 volume, Reasonable Faith. He has done much to defend theism against the new atheism, and has also done much on ethical issues. He happens to be a visiting lecturer right now at the University of Notre Dame in Sydney, so that is why he is available for this show.

That is where the good news ends. The other three “Christians” are hardly that. The first is lesbian activist and comedian Julie McCrossin. She “married her” female partner in 2014, and the ABC of course considers her to be representative of Christianity as a whole! She is an elder at a Uniting Church in Sydney.

She has often been on this and related shows. Indeed, on one occasion Q&A had another “Christian” panel – also with her on it – but this time it was six against one! I also wrote that show up: https://billmuehlenberg.com/2011/07/11/the-abc-should-be-put-out-of-its-misery/

They are big on the progressive part (as in pushing every radical trendy leftist cause) but real small on the Christian part (as in proclaiming biblical truth). See here for example: https://billmuehlenberg.com/2011/01/23/progressive-christianity/

Oh, and just so that we know she is a fully ABC-approved lefty, we see she is also in favour of the homosexual agenda. As just one example, she tweeted this to lesbian Labor Senator Penny Wong when she was debating homosexual marriage a few years ago: “@SenatorWong be awesome. We are counting on you.”

Finally, we have an aboriginal Christian. Oh that’s good – well, not quite. He is also another lefty activist. Ray Minniecon, Indigenous Anglican Pastor, has also been outspoken on various causes. But since we are concerned at how much this show will focus on sexual morality, marriage and the like, where does he stand on all this?

Well, we already know, and he certainly is not representative of his people as a whole, not of the Christian church. For example, when the ACL rightly spoke of a new “stolen generation” being created with children being deprived of both a mother and a father with homosexual marriage, Minniecon angrily lashed out at them.

He took Lyle and the ACL to task, claiming past government policy on children in aboriginal communicates was “no way comparable to the desire of a loving couple to have a child and have their relationship recognized. It is disrespectful to the current Stolen Generations, their history and their families. It is also dehumanising and demonising of gay couples and their desire for marriage and family.”

Here we have – once again – a quite unrepresentative aboriginal spokesperson. The great majority of aboriginals are of course strongly against homosexuality, and there are a number of terrific conservative evangelical aboriginal Christian leaders that could have been asked on – but weren’t.

So here we have not one, not two, but three pro-homosexual “Christians” debating two believers who adhere to the biblical stance on morality and marriage. And this is representative of the church at large? So the ABC is trying to tell us that a full 60 per cent of all Australian Christians are pro-homosexual while only 40 per cent are not!?

Um, this sounds like a set-up job from day one. And that is exactly what it is. The ABC pretends to be fair and even-handed, and pretends to represent all of Australia, but all that it does is represent its own radical activist ideology. And I will guarantee you right now that they will have plenty of homosexuals in the audience and on video hook-ups giving their emotional case for “Christian love” and for homosexual marriage. I guarantee it.

The ABC activists simply invite in all their buddies, fills the audience with them, and tells them ahead of time they will be called upon to give their story. I have seen this in action so many times when I have been on these sorts of shows.

Indeed, I recall being on one such show in Sydney for SBS. Sure enough, homosexuality was again the main topic. When it finished many of the homosexual audience members came down and hugged and chatted with the show’s producers – they were all buddies! So much for just recruiting a fair and unbiased audience from the community at large. They just call their activist friends in to make their case for them!

Because the ABC in general and Q&A in particular are so appallingly biased, bigoted and unbalanced as they push a radical secular left and anti-Christian agenda, my usual rule of thumb is not to watch them at all. On occasions like this I may tune in simply to offer up prayers for the handful of brave contrarian voices.

I hope you also pray for this debate, especially when it goes to air live on Monday night. Pray that bits and pieces of truth will emerge even though it is another stacked deck, designed to pillory conservative and Christian voices, and push radical agendas.

While some have told me our side should not even bother going on such rigged shows, I believe God can still use folks who are willing to stand up for truth in the public arena, no matter how hostile and unfair the environment may be.

25 Replies to “The ABC Doing What it Does Best”