A culture is in terminal condition when it decides that it does not give a rip about the next generation. When it actually detests children so much as it pursues reckless, immoral, activist agendas of adults, regardless of how much children suffer, then you know that culture has just about had it.

The West is now at that place. One radical activist agenda after another has been run with, and the big losers in all this are our children. Of course millions of these children never even get to see the light of day as they are slaughtered in their own mothers’ wombs.

That is the ultimate hatred of children. But if they are allowed to be born, they are also treated like dirt in order to appease adult activists who are seeking to remake society in their own sordid image. My website has documented this hundreds of times.

And sometimes the old saying about a picture being worth a thousand words is absolutely true, and the best way to proceed here. No matter what I or others say, sometimes just seeing the bitter fruit of the child haters is the only way to go. 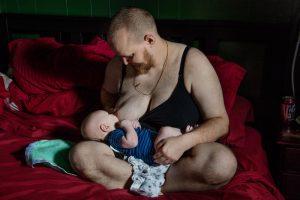 Thus this picture. I have yet to find one person who thinks it is neat, or acceptable, or cool. Sure, there will be some folks whose moral compass has long ago been destroyed who will think this is no big deal, but normal people who still have a head and a heart are all repulsed by this.

It comes from a Time magazine story about a woman who decided she wanted to become a man, but still wanted to have a baby. The lengthy article is among one of the saddest and most sickening pieces you read – all the more so because Time magazine in true secular left fashion refuses to find anything wrong with all this.

It is just another matter of fact news story, like a guy going out for a bicycle ride or a woman drinking a cup of coffee. That shows how far down the tubes we have gone as a culture, and how reprobate so much of the mainstream media is.

I could stop at this point and just let you stare at this grotesque picture for the next ten minutes. What is seen here cannot be unseen. Hopefully it will shock a few more people into realising just what a diabolical Brave New World the sexual revolutionaries have created for us.

The homosexual and transgender agendas are among the most anti-child agendas you will ever come upon. And it all gets worse by the day. Those who dare can read the entire depressing article here: time.com/4475634/trans-man-pregnancy-evan/

It really is sickening. The absolute and fundamental rights of a child to be raised by his or her biological mother and father have been stripped away once again as selfish and greedy adults commit social and cultural kamikaze attacks in order to satisfy their lusts and implement their horrific political and social ideologies.

Pray for this child. What a hellish life it will lead with this woman who thinks she is a man and her female partner. I cannot imagine a much more bleak future for this poor child. And the sad thing is, we already know how bad all this is. I have written often about children raised in homosexual households and the trauma and grief they have gone through.

Many of these folks are now adults and they have written extensively about their childhood. One of them is American writer Katy Faust. She has been there and done that. And thankfully she has just written a piece on the Time story which is well worth reading. Allow me to present a few highlights from her article. She states:

The author goes on to normalize this new frontier of “family” when in reality it’s the story of a manufactured infant – a child whose life began with loss because the adults involved forced the baby to sacrifice his rights so he would fit into their lifestyle. This may be the New American Family – if by that you mean the latest way that adults are violating the rights of children. The sister told this family’s story from her “brother’s” perspective.

But it is the baby’s perspective that really matters here, and Katy lists five key issues that rarely are heard in these debates:

First, because Baby Boy is the product of sperm donation, he is only related to one of the adults he will call “parents”. That means that he loses half of his heritage and half of his extended family. And, if he’s like the other donor-conceived kids that I know, he will likely spend a portion of his adolescence and adulthood seeking, maybe obsessing, to find the identity of his donor and half-siblings and also feeling troubled that money exchanged hands over his conception. Children should not be, and don’t like to be, treated as products to be designed and purchased. Kids crave biological connection….
Second, while he will have a parent who appears male (male with engorged milk-filled breasts mind you) Baby Boy will not have a father. I’m a mother of sons and I can assure you that there are things that my boys need that I cannot give them- not even if I were to strap down my breasts and get a testosterone-induced beard. You see, women stink at being men….
Third, having only one biological parent means that this boy will be raised (assuming that relationship lasts) by another woman not related to him at all. Having worked in adoption, and observed my fair share of blended families, I can tell you that bonding and attachment with a non-biological adult is much more difficult outside of the rhythms that nature provides. Because of our broken world, sometimes it’s necessary to ask a child to love a biological stranger. But those relationships take more work, and tend to be much more tenuous for the child, than the kinship parent-child connection. This couple has deliberately chosen a more difficult attachment road for Baby Boy.
Fourth, when raised by same-sex parents – which Baby Boy is despite the masculine appearance of his mother – kids are at risk in several areas and no, it can’t simply be attributed to “stigma.” As is evidenced by his “father’s” life, Baby Boy is more likely to be gay or transgendered himself. In addition, recent research shows that Baby Boy is much more likely to be depressed, suicidal, and obese than his peers who are being raised by their mother and father. He is more likely to feel distant from one or both parents….
Finally, why do you think that it requires a man and a woman to make a baby? Children are made from a man and woman and they require the love of a man and woman, because they will grow up to be… a man or woman.
Contrary to popular opinion, children do not just need love and nurture. They also need a male and female parent. I’m not talking about superficial stereotypes where mom walks around all day in heels and pearls and dad is grunting over football every Sunday. I’m saying that both boys and girls need to see their mothers loving being a woman, and their dads being strong men. They should see their parents appreciating the distinctions in communication and how men and women think and relate to the world. What children don’t need, is parents who tell them that they should become life-long customers of cosmetic surgery and the pharmaceutical industry if they experience gender confusion. Kids need to see mom and dad embracing their femininity or masculinity. Why? Because it tells them the most important thing about themselves, namely: “That’s what I’m becoming, and it’s awesome.”

Katy concludes with these words:

So what’s the take-away from this “Dad” giving birth? Simply this: Don’t ask a child to give up what he’s made for so that you can live as you please. Children have a right to their mother and father. They have a right not to be purchased and manufactured into existence. And they deserve parents who will model and tell them that their bodies, beautifully male and female, are perfect without any added hormones or surgical alterations.
Do what you want to do with your body. Form whatever (adult, consensual) relationships you choose. That’s your prerogative. But when you have children – whether you are heterosexual, homosexual, or transgender – it’s not about you anymore. Adults must bend their desires so as to protect a child’s fundamental rights. That’s what it means to be an adult, after all.

We can only pray for this child, and so many other children who are simply the guinea pigs in adult political games. They suffer enormously. And we can also share truth. We need not be afraid to boldly stand in the public arena and announce what we all know to be true: children need their own mother and father, and deliberately bringing a child into the world without them is a form of child neglect, if not child abuse.

16 Replies to “When a Culture Hates its Own Children”