Yesterday I posted my first piece on the historic election victory of Donald Trump. In it I said that this election was all about who was disliked the most. People were not so much voting for someone as against someone else. Both candidates had record low approval ratings. Yet one had to give way to the other. See that piece here: billmuehlenberg.com/2016/11/09/trump-wins/

As the dust continues to settle, there is still much more to be said about this election result. One obvious feature is the expected hysteria from the progressive left. They are absolutely in meltdown at the moment and are experiencing the full range of apoplectic convulsions.

It of course did not take long at all for the tolerant lefties to throw major hissy fits, complete with rioting in the streets. As one news report stated:

Crowds of angry protesters have taken to the streets across the United States chanting “Not Our President” while setting fires and smashing windows. Hundreds of people descended on California minutes after it was announced that Donald Trump had won the election. Hillary Clinton supporters were filmed setting fire to the US flag while marching through the streets of Portland, Oregon, shouting “F*** Donald Trump”. 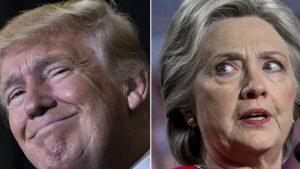 Ah yes, leftist acceptance, diversity and tolerance in action. Watching Australia’s ABC or reading the Melbourne Age has been oh so entertaining. They have been entirely predictable in their enraged responses. For example, within hours of the winner being announced the Age website featured an article making the Hitler comparison.

Well, that didn’t take long – although I see they have now changed the headline and dropped the “H” word from it. All over the West the lefties are going troppo, telling us it is the end of the world as we know it. They are simply going ballistic right now. And well they should.

This election was not so much a vote FOR Trump as a vote AGAINST Hillary Clinton in particular, and the entire progressive leftist agenda in general. People are fed up, and they are not going to take it anymore. Indeed, the lunar left is shaking in its boots because this is now the second major slap in the face they have received.

First we had the remarkable Brexit vote that shocked so many, and now this. This is just too much for the radical left to handle. What will be next? A conservative revolution in Australia, or Europe, or elsewhere? Many commentators have already noted how massive a rejection of the left this was. Let me offer some quotes from a few of these commentators.

Today, for the second time in five months, a left-wing elite paid the price of ignoring, for many years, the warnings of civilised and tolerant conservatives. I cannot tell you how frustrating it has been, when trying to debate politics with readers of the Guardian and the New York Times.
To suggest to them that mass immigration is risky and destabilising; to urge that the married family needs to be supported, not dissolved; to say that education needs more rigour, discipline and selection; to advocate the deterrent punishment of crime rather than its indulgence; to suggest that pornography and swearing may damage civility; to object to attempts to abolish national borders and sovereignty; to say that violent liberal intervention in foreign countries is dangerous and wrong… any or all of these things has earned me a patronising sneer, a lofty glance, a dismissal as if I am some sort of troglodyte who has got into the room by mistake.

Or as Gerald Warner commented:

Brexit 2: Nightmare on Pennsylvania Avenue. Of course a United States presidential election is obviously an American event, but this one is much more. It is part of an anti-liberal, anti-elitist global counter-revolution.
Any liberal, internationalist, politically correct, climate alarmist progressive who thought Brexit was a bizarre fluke that would never be repeated and could be suppressed by the establishment should waken up to the reality of being, in the ludicrous phrase coined by the lame duck president now vacating the Oval Office, on the wrong side of history.
President Elect Trump promised to build a wall, but he began by smashing one down: the so-called Blue Wall of Democrat states in America’s north-east that was supposed to be Hillary Clinton’s electoral firewall. The rural states of the US will be hard pressed to furnish enough eggs to cover the faces of all the pollsters, commentators, electoral strategists and assorted charlatans who got everything wrong that they conceivably could. They represented the invincible Democrat election machine as the equivalent of the Wehrmacht in 1940; by the end of the night it resembled the Wehrmacht in 1945.

David French put it this way:

This is a direct rebuke to progressive hubris. It turns out that the progressive elite’s preoccupations with identity politics, social shaming, and radical sexual change don’t motivate their “coalition of the ascendant.” In the past eight years, the progressive movement has doubled down its attacks on churches and in recent years directly confronted American law enforcement. It has attacked free speech, the free exercise of religion, and gun rights — secure in the belief that history was, as they put it, on their “side.” The result was clear: The Democratic party lost ground with America’s poorest voters. Citizens making less than $50,000 per year propelled Obama to victory over Romney. Exit polling shows that Trump improved the GOP showing by 16 points with voters making less than $30,000 per year and by six points with voters making between $30,000 and $50,000, which more than offset Democrat gains with the middle class.

And here down under Andrew Bolt said more of the same:

Donald Trump’s win is the biggest “f— you” to all his enemies — the media, the politicians and Wall Street.  The whole world now — and our own political class — has been given a shock and a warning. Stop bullying and patronising the silent majority or they will rise in terrible revolt. The British vote to leave Europe showed the public would no longer be chained. Trump’s victory confirms it.
Even I could not see Trump winning. I could not believe so many voters were so cowed by the violence and the abuse of the Left that the polls, misled by their silence, had Hillary Clinton winning by an average of 46.8 per cent to Trump’s 43.6.
But in the ballot box those voters cut loose and chose as their next president a man with zero political experience and vilified in the media as a sexist, racist, neo-Nazi hothead likely to drop the nuclear bomb. Maybe he is some of that, but how much did voters loathe the Washington crowd that they’d still rather have Trump, who on the day before the election led crowds in another chant of “Drain the swamp”?

The movement against the establishment political parties, who have consistently and willfully ignored the mainstream majority in favour of their own power and self-interest, is moving across the globe. I think it is going to have implications globally and I support some of those changes.
There’s a global disconnect between what are known as the cultural elites, or sections of the media, people like politicians who basically talk to themselves in an echo chamber and they don’t seem to engage or don’t want to understand the concerns that are voiced by the silent majority.
Being in America, the cheerleaders – and that’s the only word you can use to describe them – in the media, and amongst the elites and the intellectuals, for business as usual demonstrated there was such a massive disconnect from the millions and millions of people who are really struggling in this country and right around the world to have a voice.

As can be seen, much of my article is about how bad Clinton and the left have been and why folks are fed up with it all. I have not said too much about Trump. But I have penned dozens of articles over the past year declaring my very real concerns about the guy.

Such concerns need not be rehashed here. Suffice it to say that it is absolutely sensational news that the corrupt Clinton machine has been stopped dead in its tracks, and the diabolical Obama agenda will not be allowed to continue, at least through the White House for a while.

How Trump does remains to be seen however. I am not at all naïve here. He could follow through on some of his conservative policy promises, or he might not. Time will tell. He could be a real handful and cause more harm than good. Or, he may surprise many of us and turn out to be halfway decent. Again, we will have to wait and see.

But it is enough for now to see Hillary thoroughly trounced, and the radical left’s agenda given a major setback. That has certainly made my day. Let me use a sporting analogy here: If a sporting championship or final features two players or teams with neither one being your favourite, you sometimes cheer for the defeat of the one you detest the most.

That is how I am with the US election. A Trump win does not thrill me, but a Clinton defeat most certainly does. So I will enjoy a few more days savouring all this, engaging in some shameless schadenfreude along the way.

29 Replies to “More on the Trump Win/Clinton Loss”