Dutch politician Geert Wilders has just been found guilty of ‘inciting discrimination’ against Muslims. The guilty verdict was perhaps expected given how much Holland and Europe is bending over backwards to accommodate Islam. I wrote about this Dutch court case just a few weeks ago: billmuehlenberg.com/2016/11/24/islam-west-geert-wilders/

The decision is of course concerning, but Wilders is not going to take this lying down. One news report put it this way:

Dutch anti-Islam political leader Geert Wilders has been convicted of insulting a group and inciting discrimination. But no penalty was imposed by the court near Amsterdam on Wilders, whose party is leading in polls ahead of parliamentary elections in March. Wilders was also acquitted of inciting hate over telling supporters in March 2014 he would ensure there were fewer Moroccans in the Netherlands. He called the guilty verdict “madness” in a tweet posted a short time later. He said he would appeal. 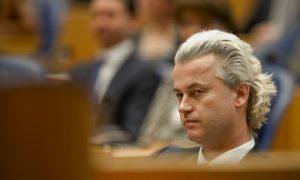 It was more than two years ago when Wilders, whose reputation for blunt speaking and advocacy for a Netherlands-first attitude is legend, led a party rally where he asked supporters whether there should be “more or fewer Moroccans in the Netherlands.” The crowd chanted “fewer.” The verdict comes just weeks before general elections. Wilder’s Party for Freedom holds the lead in some polls.
One of those who raised complaints about Wilders said he was satisfied with the verdict: “Half a million people feel the threat of Wilders every day. … I hope people who vote for Wilders will listen.” The nation’s Moroccan community, mostly Muslim, still may bring a civil complaint, according to a solicitor for an organization of Moroccan mosques. Wilders was unbowed by the court’s decision.

He certainly was. He has spoken about this outcome, and is undeterred in standing against creeping sharia and stealth jihad in the Netherlands. Here is his full response:

Dear friends, I still cannot believe it, but I have just been convicted. Because I asked a question about Moroccans. While the day before yesterday, scores of Moroccan asylum-seekers terrorized buses in Emmen and did not even had to pay a fine, a politician who asks a question about fewer Moroccans is sentenced.
The Netherlands have become a sick country. And I have a message for the judges who convicted me: You have restricted the freedom of speech of millions of Dutch and hence convicted everyone. No one trusts you anymore. But fortunately, truth and liberty are stronger than you. And so am I.
I will never be silent. You will not be able to stop me. And you are wrong, too. Moroccans are not a race, and people who criticize Moroccans are not racists. I am not a racist and neither are my voters. This sentence proves that you judges are completely out of touch.
And I have also a message for Prime Minister Rutte and the rest of the multicultural elite: You will not succeed in silencing me and defeating the PVV. Support for the Party for Freedom is stronger than ever, and keeps growing every day. The Dutch want their country back and cherish their freedom. It will not be possible to put the genie of positive change back in the bottle.
And to people at home I say: Freedom of speech is our pride. And this will remain so. For centuries, we Dutch have been speaking the unvarnished truth. Free speech is our most important possession. We will never let them take away our freedom of speech. Because the flame of freedom burns within us and cannot be extinguished.
Millions of Dutch are sick and tired of political correctness. Sick and tired of the elite which only cares about itself and ignores the ordinary Dutchman. And sells out our country. People no longer feel represented by all these disconnected politicians, judges and journalists, who have been harming our people for so long, and make our country weaker instead of stronger.
But I will keep fighting for you, and I tell all of you: thank you so much. Thank you so much for all your support. It is really overwhelming; I am immensely grateful to you. Thanks to your massive and heartfelt support, I know that I am not alone. That you back me, and are with me, and unwaveringly stand for freedom of expression.
Today, I was convicted in a political trial, which, shortly before the elections, attempts to neutralize the leader of the largest and most popular opposition party. But they will not succeed. Not even with this verdict. Because I speak on behalf of millions of Dutch. And the Netherlands are entitled to politicians who speak the truth, and honestly address the problems with Moroccans. Politicians who will not let themselves be silenced. Not even by the judges. And you can count on it: I will never be silent.
And this conviction only makes me stronger. This is a shameful sentence, which, of course, I will appeal. But I can tell you, I am now more vigorous than ever. And I know: together, we aim for victory.
Standing shoulder-to-shoulder, we are strong enough to change the Netherlands.
To allow our children to grow up in a country they can be proud of.
In a Netherlands where we are allowed to say again what we think.
Where everybody can safely walk the streets again.
Where we are in charge of our own country again.
And that is what we stand for. For freedom and for our beautiful Netherlands.

If he and his party do win in March it will be part of the bigger counter-revolution taking place in the West. The Brexit win and the surprise win of Trump in the US are just two of a number of indicators of a growing resistance movement to the dominant leftist PC culture which has had such an iron grip over the West for so long.

While politics alone will not save us – only widespread and heartfelt God-sent revival can do that – it is encouraging to see such a strong push back to the reigning radical leftist hegemony. People are fed up with the loony left establishment, and they are not gonna take it anymore.

We need more resistance to the decadent system – we need more raging against the machine. Enough is enough. Time for a conservative revolution.