Tennis fans no doubt will know what I am referring to here, at least with my first three Gs. They would know all about the record-breaking events of the past two weeks at the Australian Open, culminating in the amazing men’s and women’s singles’ finals.

Some of the old guard came out and showed the young whippersnappers what the game is really all about. Roger Federer is 35, Rafael Nadal is 30, Serena Williams is 35 and Venus Williams is 36. Wow, those are some oldie mouldies out there, showing us how it is done.

Serena of course beat her older sister on Saturday night to take out her 23rd Grand Slam victory – just one short of the record held by the legendary Margaret Court. (She said this weekend that she believes Serena will overtake her record.) And Roger, in an epic 5-set match, managed to get past his old rival Rafa on Sunday night. It was a thrilling weekend of tennis. 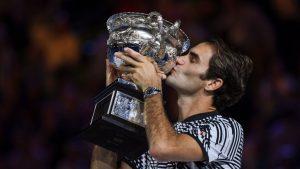 And plenty of records have been broken here as well. Let me focus on the great one, Roger Federer and just some of his accomplishments in the Open Era (which began in 1968). Last night he played his 100th match at the Australian Open. The only others to come close have been Jack Crawford with 70, Stefan Edberg with 66, and Novak Djokovic with 65.

His 18th Grand Slam may be untouchable – at least for a while – with Pete Sampras and Nadal the closest with 14 each, followed by Roy Emerson and Djokovic with 12 each. His 18 victories are these: 7 Wimbledon titles, 5 US Open titles, 5 Australian Open titles, and 1 French Open title.

His win/loss record at the four Grand Slams stand as follows:

Only Djokovic and Emerson have won more Australian open championships with six each. And Federer is the first and only player to win five or more championships at three separate Grand Slam events. And one can also speak of prize money, with Federer now the $100 million dollar man, surpassing $US100 million in career prizemoney after his 6-4, 3-6, 6-1, 3-6, 6-3 win last night.

Wow, those are some pretty amazing stats and figures. And plenty more could be mentioned.

God and his glory

I must confess to having a soft spot for Roger – he seems to be a likeable and humble fellow, and he also reminds me a bit of one of my sons. So I did shoot up a few prayers on his behalf the past two weeks I must also confess! But I realise we have a few problems here: what happens when other equally devout Christians shoot up prayers for his opponents? How does God deal with those conflicting prayers?

But on a more serious note, I of course also prayed for his salvation – and for the salvation of some of the other great players. Despite all the glory and greatness of being among the best tennis players in the world, all that really matters in the long run is if you are in right relationship with God.

So while I think it is neat that Roger has won his latest Grand Slam after such a long time, and has done so at a ripe old age against perhaps his greatest rival, I know that what really counts is the state of his soul. So I will keep praying that if he has not yet bowed the knee to Christ that he soon does so. 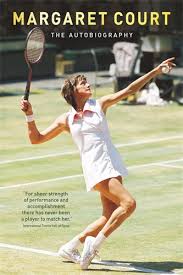 I mention all this because we do know of another champion who has done it all: achieved tennis greatness, but more importantly, become a child of God through faith in Jesus Christ. I refer to the incredible Margaret Court, the greatest female tennis player ever, who is now involved in full time Christian ministry.

The winner of 24 Grand Slam singles events, she has towered above all the other women, and for a long time it looked like no one would be able to rival her many achievements on the court. But she would be the first to tell you that there are even greater things than being the best female tennis player.

Toward the end of her amazing career she became a born-again Christian and now labours tirelessly for the Lord. Because of her strong, biblical stances on things such as homosexual marriage, she is regularly vilified and hated on by many.

But she refuses to compromise, and is now as fully committed to Christ and the Kingdom as she once was to tennis – even more so. I have known Margaret for a while now and shared speaking platforms with her on several occasions. She is indeed a champ.

I have heard her share her Christian testimony and it is inspiring stuff. Just over eight years ago a brief version of it appeared, so let me share just a bit of that to give you some more insight into the woman:

Court, now 66, says her faith in God helped her become one of the greatest female tennis players of all time. The International Tennis Hall of Fame states, ‘For sheer strength of performance and accomplishment there has never been a tennis player to match her.’
But the humble Australian insists her success is down to God. She tells of how, during a tournament in Paris in 1973, she realised that something was missing in her life – a closer relationship with God. She added, ‘I knew God was there and thought l must be able to know him in a deeper way. A short time later a friend gave me a book on becoming a Christian. I read it, and soon after l made the decision to become a Christian, accepting Jesus Christ as the Lord of my life.
‘I continued to be successful on the tennis circuit, but I wasn’t happy. I needed to be closer to Jesus, and l believed that l couldn’t do this by filling my life with tennis. At the end of 1976, l decided to retire from tennis and devote myself to looking after my family and getting to know more of Jesus. The next few years were a real struggle for me dealing with a heart condition, depression and insomnia but what got me through was total devotion to God and his word the Bible.
‘It gave me inner strength and brought healing to my body and mind. A verse that really kept me going is Galatians 2 20 “I have died but Christ now lives in me. And now l live by faith in the Son of God, who loved me and gave his life for men.”
‘In 1982, I went to Bible College and since then my goal has been to go out and share God’s Word with as many people as possible. I love to tell them how they can renew their lives and how they can overcome fear by really focusing on the Word of God.’

Last year she released her autobiography, so for those who want to learn more about her and her amazing story, please check it out. As I say, I am praying for other great players like Federer that they too would come to know something – and someone – even greater and more glorious than what any amount of sporting accomplishments can produce.