Telling lies about God and what God’s Word says is a common practice of those who seek to justify their rebellion and sin. Sadly, we do not just have individuals doing this, or even just churches, but entire denominations. Consider the Metropolitan Community Church which exists to promote and justify homosexuality while pretending to somehow be a Christian denomination. 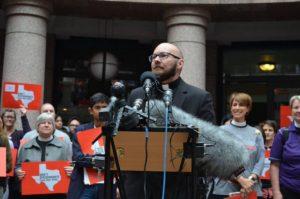 It was founded in 1967 in LA by homosexual activist Troy Perry. The entire foundation of this group is built on the lies of the devil, so we can expect that only bitter fruit will emerge from them. Not surprisingly, they support every radical anti-biblical sexual agenda item there is, be it homosexual marriage or the whole gender bender madness.

One might as well have an entire denomination which exists to affirm, promote and celebrate adultery, or fornication, or theft, or any other clearly defined sin. That is what this group is all about: championing sin and blatantly and mischievously making excuses for it.

So we need to avoid this group like the plague. We of course should pray that they are delivered from the satanic deception they are bound up in, as well as be delivered from their immoral, sinful and dead-end lifestyles. But we must not allow their apostasy and deceit a free run.

Consider just one recent example of what this group is all about, as found in this report:

A Texas pastor opposing a controversial transgender bathroom bill that would require individuals to use public restrooms based on “biological sex” protested the bill with hundreds of LGBTQ advocates on Tuesday declaring that “God is transgender.”
Senate Bill 6, proposed in January, would require everyone to use bathrooms in public schools, government buildings and public universities based on “biological sex,” according to The Texas Tribune. The measure would also pre-empt local nondiscrimination ordinances that allow transgender Texans to use the bathroom that corresponds with their gender identity.
The Rev. S. David Wynn, a senior pastor from Agape Metropolitan Community Church in Fort Worth, Texas, lashed out at the bill in solidarity with hundreds of LGBTQ advocates protesting the bill outside the state capitol in Austin.
“In the beginning, God created humankind in God’s image. … So God is transgender,” Wynn told the crowd which roared in approval. “We’re all created in the image of what is holy and divine and sacred, and we should all be treated that way.”

The blatant lies and deception found here is staggering to behold. But it is fully to be expected. Those who seek to make excuses and justification for their sin and rebellion against God will always twist and distort the Word of God to serve their evil ends.

The level of dishonesty here alone is enough to make you ill. Even taking the word “transgender” at its most basic, it of course can never be used to describe God. As an adjective it has to do with those whose sense of personal identity and gender does not correspond with their birth sex.

Thus a girl no longer wants to identify as female or a guy does not want to identify as male. That is what the term actually means. So how in the world can we apply something like this to God? The Bible is crystal clear in informing us that God is a spirit, and is not a sexual being at all.

As I put it in an article about God and gender: “God is not gendered, nor a sexual being. God is a spirit, as we are told by Jesus himself in John 4:24: ‘God is spirit, and his worshipers must worship in the Spirit and in truth.’ Divine beings are not male nor female. But, God is also a personal being. God is not a human being, but is nonetheless personal.”

The fact that we are made in his image does not mean of course that we are spiritual, sexless beings. It means we share in his personal characteristics – we are people with mind, will and emotion. The fact that God made us of two different sexes – male and female – is the creational order and blueprint for how we are as sexual beings.

Nowhere in the creation account – or anywhere else in Scripture – are we told that the way God made mankind can involve choosing a different sex to the one we are born with. We are either male or female, end of story. Nowhere does the Bible tell us that our sex is a matter of indifference or of choice or of preference.

Of course any genuine biblical Christian knows that God’s good purposes in creation have been marred by the Fall. Now, with sin in the world, impacting on every one of us, we find things are often not the way God meant them to be.

And one very rare case of such sexual and chromosomal abnormalities comes in what is known as the Intersex condition. This has nothing as such to do with the homosexual agenda or even the transgender agenda. As I explain in my book Strained Relations:

It must be noted that a very small percentage of people are in their own category, and are quite different. I refer to the intersex condition, where genetic abnormalities results in sexual confusion. There can be ambiguous genitalia, chromosomal imbalances – eg, having an extra sex chromosome – and so on. These can be found in conditions such as Congenital Adrenal Hyperplasia, Turner Syndrome, Klinefelter’s Syndrome, and Androgen Insensitivity Syndrome. Intersex conditions are mostly innate, whereas the unusually low concordance rates in identical twins (who have identical genes and essentially prenatal environment) show that causes of homosexuality are predominantly post-natal.

So there are some very rare yet legitimate cases of some ambiguity when it comes to one’s sex. But these are extreme cases and have nothing to do with those who decide they no longer like the sex they were born with, and decide they want to become the other sex.

So from both a biblical/theological as well as a medical/scientific point of view, this “pastor” is simply spreading falsehoods and deception to further the agenda of the sexual radicals. But we expect as much from an apostate denomination like the MMC which is proud to affirm sin and twist God’s Word.

The levels of deception and rebellion found throughout the West are increasing exponentially. While Jesus and the disciples warned us that this would be the case, it is always disheartening to find it in such blatant and arrogant form. It is time for all true followers of Jesus Christ to stand strong here and reject the theological revisionists.

13 Replies to “No, God is Not Transgender”