There is no other group on the planet subject to so much persecution, suffering and death as Christians. Primarily at the hands of Islam, Christianity is the most abused and persecuted group today, and it seems to be getting worse as we speak.

Daily we see graphic reminders of the war on Christianity, with believers being killed around the world at alarming rates. One organisation working on behalf of the persecuted church, Open Doors, lays out the facts and figures this way:

Each month:
-322 Christians are killed for their faith
-214 churches and Christian properties are destroyed
-772 forms of violence are committed against Christians (such as beatings, abductions, rapes, arrests, and forced marriages) 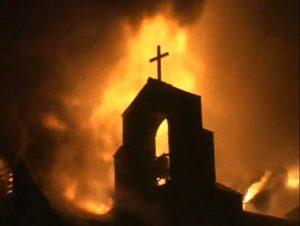 One write-up on this topic also makes for scary reading:

In many parts of the world, Christians gathering to celebrate Christ’s resurrection do so with the knowledge that any day their faith could cost them their lives as it has for thousands of their brothers and sisters….
During the last calendar year, some 90,000 Christians were killed for their faith across the globe, making Christians by far the most persecuted group in the world, according to a study from the Turin-based Center for Studies on New Religions (CESNUR).
The director of CESNUR, Dr. Massimo Introvigne, told Breitbart News that whereas atheistic communist regimes were the greatest persecutors of Christians in the last century, “Islamic ultra-fundamentalism” has taken its place as the number-one agent of persecution.
The Center’s findings corroborate those of other scholars and human rights groups. According to the 2016 “World Watch List,” for example, published by the Open Doors organization, nine out of the top ten countries where Christians suffer “extreme persecution” had populations that are at least 50 percent Muslim.
Their 2016 report revealed that “Islamic extremism is by far the most significant persecution engine” of Christians in the world today and that “40 of the 50 countries on the World Watch List are affected by this kind of persecution.”
During the year, nearly one-third of the Christians killed for their faith were executed at the hands of Islamic extremists such as the Islamic State or Boko Haram.
While tens of thousands of Christians are killed for their faith, Introvigne said, they are just the tip of the iceberg and much persecution takes place on a daily basis that never makes news. Along with the enormous number of deaths, a great many more Christians—as many as 600 million—were prevented from practicing their faith in 2016.

As you know Coptic Christians in Egypt have especially been targeted of late. Coptic believers in the UK are certainly worried about all this. As one news report states:

Amir Michaeel is a Coptic Christian and like many others he struggles to understand why his faith is such a target overseas. ‘In a way it can be like, because we are not retaliating, we are a weaker target and we are easy prey,’ he said. ‘But at the same time I feel like there is something profoundly difficult about attacking someone who is not retaliating. For someone to turn the other cheek and for you to feel okay to hit them, I feel like it would take something quite inhumane to do something like that.’
There is a general perception that the media, and the West, has in recent years largely ignored attacks on Christians in some parts of the world. Tim Stanley, journalist for the Daily Telegraph, has written on the subject and told Sky News that people are too afraid to call it ‘a war’.
He said: ‘Some Western governments are legitimately worried about appearing to validate the narrative of the Islamists that this is about Islam versus Christianity, so they don’t want to talk about the persecution of Christians and I get that. The problem is that’s exactly what is actually happening. Moreover, I fear that some of that is political correctness.’

Yes, Western nations should be at the forefront of standing up for these persecuted believers. Yet in the West our leaders too often seem far more worried about Muslims having their feelings hurt. We have managed to side against the persecuted while siding with the persecutors.

Thankfully there are some notable exceptions here. Let me single out just one: Coalition frontbencher Michael Sukkar, the Federal member for Deakin. Late last year he released a ‘Grievance Motion on the Global Persecution of Christians’. He said in part:

I rise this evening to speak about a matter of great importance to me and many people in the Australian community and, I hope and believe, to many people throughout our world: that is, the persecution of Christians around the world. We hear much in the media commentariat and elsewhere about the persecution of various groups globally. Often this is warranted, and it is important to recognise that our efforts as Australians and as part of the Western world to fight against these injustices are often informed by the Judaeo-Christian values that underpin the values of our country and our civilisation more broadly.
Yet in our world today, the undeniable reality is that it is those of a Christian faith who are the most persecuted people in the world. This persecution can often be at the hands intolerant majorities of other faiths or militant groups, but it is more often than not state sponsored persecution against Christians that is becoming increasingly widespread. Of even greater concern is that this state sponsored persecution often comes at the hands of governments who receive foreign aid from Australia as well as other Western nominally Christian countries.
One shocking recent example is that of Asia Bibi, a mother of five in Pakistan who has essentially been sentenced to death for the crime of being Christian in a Muslim majority country after a recent sentence hearing on a charge of blasphemy. You may ask: What was her crime? She was alleged to have told colleagues that Jesus would have taken a different viewpoint to Mohammed when she was asked not to drink from the same water supply as the Muslim residents in her village. They believed that she would foul the water supply with her unclean Christian hands. After Asia Bibi allegedly said that Jesus would take a different view, a Muslim replied: ‘How dare you question the prophet, you dirty animal.’ Three other women joined in shouting, ‘It’s true, you’re nothing but a dirty Christian.’
This is sadly just another example of the ongoing persecution and terror that Christians face in Pakistan. Christian women and girls are regularly abducted in Pakistan; some are killed, others are forced to convert and marry; and many never heard from again. This is all occurring at a time when Pakistan is a huge beneficiary of foreign aid funding from a number of Western nations. From Australia alone, Pakistan will receive more than $55 million in aid this year. Other places such as the United States and the United Kingdom give at even higher levels. Clearly, it is a grave concern that Australian taxpayer dollars would go to a country and government that carries out such egregious human rights abuses directed at a particular minority—in this case, Pakistani Christians.
If Pakistani does carry out the execution or refuses to release Bibi, Australia should cut all aid and consider further sanctions, including sporting bans which would necessarily affect the Pakistan cricket team. This would send a strong message to the world that Australia will always stand up for persecuted minorities, not least the Christian communities that the world seems to have turned its back on.

And just a few weeks ago he called on Australia to officially recognise as genocide the Islamic State massacre of Christians in Iraq and Syria. As one news report states:

Mr Sukkar will call for a Coalition-sponsored motion to be put before parliament when it returns in May. The bid to build consensus on the issue comes after Foreign Minister Julie Bishop was approached last year by an ISIS survivor for the government to adopt a genocide declaration against the terrorist group.
Labor’s Treasury spokesman, Chris Bowen, last year put a motion to parliament to recognise the ethnic and religious “cleansing” of Christians by ISIS but it was never put to debate. Mr Sukkar, a Lebanese Christian and MP for Deakin, has now called for the government to put its own motion to the house, following the Scottish parliament’s recognition last week of the mass killings as “genocide”.
“The persecution and attempted genocide of Christians and other minorities in the Middle East has been occurring for centuries,” Mr Sukkar told The Australian. “It has now reached its zenith with the bloodthirsty and barbaric Daesh (ISIS) attempting to wipe all Christians and Yazidis from the Middle East. Sadly, the silence has been deafening from large parts of the Western media and political class to these atrocities.”

There are many things concerned citizens can do about this. If you are a Christian, prayer is vital of course. Letting our leaders know about this and urging them to action is also crucial, and supporting MPs like Sukkar is certainly very important. Another course of action is a new petition being circulated by CitizenGo. Their initiative reads as follows:

Last Sunday two deadly attacks rocked Egypt in two different cities, killing at least 45 Christians. Daesh (ISIS) claimed responsibility for the attacks in what has become an everyday occurrence for thousands of Christians worldwide.
Since December, the attacks by ISIS in Egypt have increased and Christians have been killed in their homes, businesses and places of worship. According to experts, the destabilisation of Egypt has become a new target for ISIS.
Speaking in Australia following the attacks, Federal Liberal MP Michael Sukkar told Sky news: “There needs to be a political awakening and movement for people who want to practice their faith in peace.”
He called for the Australian parliament to declare the atrocities committed against Christians around the world as ‘genocide’ and accused the Islamic State radicals of waging a war on Christianity.
Please sign this petition now to support this call to the Australian government:
www.citizengo.org/en-au/pr/49894-easter-will-australian-government-call-christian-persecution-middle-east-genocide

Signing and sharing this petition is the least we can do for our persecuted brothers and sisters. Please do so now.

8 Replies to “The Global Persecution of Christians”