We have all heard, and perhaps used, the French phrase “vive la difference,” meaning “long live the difference”. As one online dictionary says, “(often humorous) Used to express appreciation of diversity, especially between the sexes.”

One hallmark of a free and democratic nation is genuine diversity, pluralism and the celebration of differences. A sure sign of a totalitarian dictatorship is stifling uniformity, even coerced conformity. Everyone must act and think the same way in the totalist state. 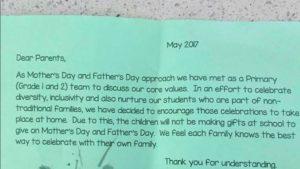 The ironic thing in all this is the ones who are the most anti-democratic and anti-freedom today in the West are those who shout the most about diversity. They in fact hate diversity and are working overtime to smash all differences, especially when it comes to male and female.

Of course the androgyny brigade has been in operation for over fifty years now, beginning with the radical feminists and now coming to ugly fruition with the transgender benders. They insist that male and female are mere social constructs, and we should not see any differences there at all.

And they are using every means they can, including the heavy hand of the law, to stamp out every and all difference. The ones who especially suffer as a result of this are our children. Examples of this are of course never ending. A recent case from Canada is simply one of the latest shocking cases of this.

As one news report puts it:

A school in Canada has cancelled Mother’s Day sending students home with a note to explain why. The note, which was given to Grade One and Two students at Albert McMahon Elementary School, British Columbia, revealed the school body made a decision to not celebrate Mother’s or Father’s Day this year.
The note explained that the decision had been made in a bid to ensure that all students, including those without traditional nuclear families, felt positive about their own family arrangements, whatever they may entail.
“In an effort to celebrate diversity, inclusivity, and also nurture our students who are part of non-traditional families, we have decided to encourage those celebrations to take place at home. Due to this, the children will not be making gifts at school to give on Mother’s and Father’s day. We feel each family knows the best way to celebrate with their own family. Thank you for your understanding.”

Let me stop right there. Notice how the first sentence in the school note is loaded with all the usual leftist buzz words: “diversity” and “inclusivity,” not to mention the major left-think slogan of the past half century: “non-traditional families”. Homosexual, feminists and the gender benders have used this term constantly in an effort to dumb down a culture as they destroy a language.

Social engineering, as we keep saying, is always preceded by verbal engineering. Here they have managed to create a complete oxymoron. When they speak of “non-traditional families” they are offering us a contradiction in terms. A family has always meant – at least until recently – any group of people related by blood, heterosexual marriage, or adoption.

But the social and sexual anarchists want none of this. They insist that anything can be called a family, whether two homosexuals, three lesbians, or any other possible combination. And by throwing around vacuous terms like “love is all that matters” or “commitment is what counts” they have totally destroyed the very notion of family.

By their definition a gang of bank robbers would qualify as a family. After all, they are a close-knit group of people united in a common cause, etc. This is all part of the radical left’s war on marriage and family, and they have been on a roll for some time now.

Indeed, Marxism has always hated the family and has done all it can to destroy it. See here for example for more details on this: billmuehlenberg.com/2016/04/08/cultural-marxism-war-family/

Thankfully not everyone is happy with this PC madness, including the moonbattery in Canada. The article continues:

When the note was shared on Facebook by parent Roy Glebe it sparked an enormous amount of debate. Roy himself said that he was bitterly disappointed by the announcement. “I don’t understand why we, as Canadians, need to give up our traditions that have been passed through generations,” he wrote.
“I welcome all races and ethnicities, but forcing us to give up things that are important to us as Canadians is crap. And it doesn’t even have anything to do with religion? You can’t celebrate your Mom and Dad?”
The image and the post has now been shared many thousands of times and even picked up by a local television station. The vast majority of those commenting felt the school was taking things too far. Many commented that, like me, they treasured the wobbly, wonky crafty items their kids presented to them on their special day and that they’d miss them if taken away.
Some were outright furious. “So there are probably 10 kids in the school they cater this to, what about the hundreds that DO and look forward to this!!” wrote one.

They have every right to be outraged. This is just more social engineering insanity. It is all part of the attempt to eliminate all differences and foist upon all of us a grey uniformity. The truth is, we celebrate mothers on Mother’s Day exactly because they are different.

There is nothing wrong with celebrating mothers and their incredible achievements, accomplishments and the vitally important role they play. To say we cannot celebrate mothers because someone might be offended is ludicrous. We might as well not celebrate any distinctive quality, trait, or human achievement.

Indeed, if we follow the illogic of the Canadians here, we can see how everything in society suffers, and we would have absolutely nothing to look forward to: just grey sameness. We could examine all sorts of areas here, but to make my point, simply consider the world of sport.

When Roger Federer wins a Grand Slam tennis final, he and he alone gets the main trophy, the massive cheque with his prize money, the kudos and the celebration. But if the Association of Tennis Professionals went with the lunacy of this Canadian school, they would not declare Federer – or whoever – to be the winner. They would declare all 128 male participants to be the winner, give them all the same trophies, and give them all the same prize money.

After all, we would not want to hurt someone’s feelings now would we? We don’t want to make any of the tennis players feel bad. So what if they are ranked 198th in the world? They are winners too, and should have all the applause, perks and celebrations as anyone else does!

And speaking of inequality, discrimination, and rights being denied, why in the world are 128 female tennis players segregated from the 128 male players? We demand acceptance, and inclusion. We want no one left out. Smash the chauvinism now.

From here on in men and women must be allowed to play together in one big happy tournament. Smash segregation and prejudice now! Stamp out artificial differences now! We demand complete equality with no exceptions. We are all the same!

This is what the radical sexual militants and the statist supporters are moving us toward. They are not leading us to greater diversity and differences, but to the ugly darkness of fascist conformity. If we would not like to see that in sport, why are we putting up with it in so many other areas of life?

Forget the political ideology and stick with biology: men and women are different. And so are mothers. If it were not for a mother, I would not be here. That is true of every single one of us. Yes the new reproductive technologies are trying to make mums and dads redundant, but mothers can never be replaced.

On Sunday, May 14 I will celebrate Mother’s Day in Australia, as will millions of others. All the PC nutjobs who find it offensive can just take a long walk off a short plank. We do not need your militant social engineering and brainless hatred of gender and family.