As we like to say in the West, “It’s a free country”. That means businesses can do what they like, and consumers can also do what they like. Thus if a company or corporation wants to push radical left-wing political agendas which have nothing to do with their core business, that is up to them – they can go for it.

But if everyday consumers do not like these radical agendas being foisted upon them, then they can take their patronage elsewhere, and buy goods and services from businesses which are more in line with their values. That is life in a democracy and a free market.

And these matters often tend to go together: the more radically leftist a business becomes, the more consumers will be inclined to shop elsewhere. Let me offer a few recent Australian examples of this, and then look at some American cases of people power in action. 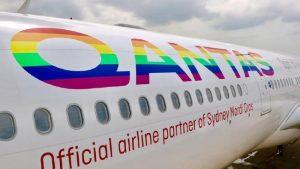 The Australian airline has a homosexual CEO and has been pushing the radical homosexual agenda for some time now. Most recently, Alan Joyce joined 19 other chief executives of large Australian companies in sending a letter to the Prime Minister urging him to support homosexual marriage.

Joyce and Qantas keep pushing the boundaries on this, forcing its customers to embrace their militant rainbow agenda, or take their business elsewhere. And that is just what many have done, including the greatest female tennis player of all time.

Multi-Grand Slam winner Margaret Court is now a pastor in Perth who stands up for traditional marriage and family values. She recently caused a firestorm of controversy by sending in a letter to a local newspaper. In it she said:

“I am disappointed that Qantas has become an active promoter for same sex marriage. I believe in marriage as a union between a man and a woman as stated in the Bible. Your statement leaves me no option but to use other airlines where possible for my extensive travelling.”

Now all hell has broken loose as the PC brigade and the rainbow mafia declare war on her. Lesbian tennis players such as Martina Navratilova, Billie Jean King and Casey Dellacqua are now throwing a hissy fit. The militants are demanding the court named after her in Melbourne be renamed, and the Melbourne & Olympic Parks body has said it supports “diversity”.

All because she dares to share her values and beliefs in public, and wishes to exercise her right as a consumer to choose who she will do business with. I like what Melbourne politician Bernie Finn said about all this: “Margaret Court has far greater right to boycott Qantas than does its CEO to hijack an iconic Australian company in order to advance his personal political agenda.”

The American-based ice cream chain has for decades now pushed the homosexual agenda. Instead of serving people various flavoured ice cream cones, it sees itself as a political lobby group. Since homosexual marriage has not been foisted upon hapless Australians yet, the 26 Ben & Jerry’s stores here are ramping up the pressure, and – get this – refusing to allow customers to get two scoops of the same flavour ice cream!

Yes you read that right. So smug and arrogant has this company become that it is thumbing its nose at Australian customers, demanding that they accept their radical left political agenda, or just drop dead. Their shops are all pushing this, and their website is proud as punch about it:

One could spend more time on how idiotic all this is. For example, they say this: “Our woefully dated federal Marriage Act (1961), as amended in 2004, doesn’t recognise marriages of all couples regardless of gender.” Good grief! So a law merely 13 years old is woefully out of date? What do they prefer – no legislation over six months?

Hopefully ordinary ice cream lovers will steer clear of these political activists and get their ice cream somewhere else, without having to put up with this leftist sermonising and bullying. And there is a petition you can sign on this: churchandstate.com.au/two-scoops-stupid/

As Dave Pellowe says, “Can you believe the increasing arrogance of giant corporations using their massive marketing budgets to interfere in our social policies and impose their CEO’s beliefs on everyone?! Tell Ben & Jerry’s they can keep their two scoops of stupidity to themselves as we don’t need corporations, domestic or foreign, dictating when our beliefs and values about marriage and family are right or wrong.”

And my friend Mark Rabich nailed it concerning this lunacy when he said: “I’d just tell them that that second scoop of vanilla identifies as chocolate. I’d call it the Rachel Dolezal. Some extra nuts for the Afro and no-one can say anything.”

Folks who are sick and tired of radical leftist agendas being pushed on them by companies who should just be fulfilling their stated business aims – be it providing coffee or what have you – are voting with their feet. Three recent examples of people power in America can be mentioned here. It shows that all this radical politics can backfire big time.

This American sports television network is another example of left-leaning activists turning off their customer base. And it is now paying a heavy price for it. As one article states:

When ESPN fired over 100 employees Wednesday, it confirmed what many media observers have known for a long time: the sports giant’s business model is collapsing in slow motion. As cable subscribers defect to internet streaming services–ESPN has lost about 10 million subscribers in the last three years — the network is less able to afford the billions in fees it must pay to broadcast live sports.
A new analysis of ESPN’s viewership data shows there might also be a political component to its financial woes. Deep Root Analytics, an Arlington Virginia-based firm that specializes in TV viewership metrics, looked at data from the Cincinnati media market for all of 2015 and 2016 to see if there was a change in the political orientation of ESPN’s viewers. The analysis showed a clear trend – ESPN’s viewership in the swing state market was less Republican in 2016 than it was the year before….

Target of course is infamous for ramming the radical transgender agenda down the throats of its customers, forcing women and children to share bathrooms and change rooms with males who pretend they are female. A huge consumer backlash was the result, and Target is losing money big time. As one report states:

The stock value of transgender-champion Target Corp. crashed by 13.5 percent this week after the company’s sales again fell below investors’ expectations. Target’s stock value is now down by 30 percent since it sparked a consumer boycott by embracing the transgender political agenda. That 30 percent drop has slashed investors’ wealth by roughly $15 billion. On Tuesday, the stock fell to $58.78, down from its April 19 high of $83.98. In contrast, WalMart is up 3 percent since April, and Kohl’s is down less than one percent.

This is another activist company where nutty leftist ideology reigns supreme, and conservatives and Christians can just get lost. Top of their radical left list is support for homosexual marriage and all things transgender. As a result, plenty of people have been boycotting Starbucks. Now it seems they are feeling the pinch and trying to win back customers:

For years, Starbucks CEO Howard Schultz thumbed his nose at conservatives – and it has hurt sales. Badly. Now, with Schultz out the door, and the company wants conservatives to come back. After five straight quarters of decreased sales, Schultz left his post as CEO and was replaced in April. Additionally, the coffee company wants to make things better with Trump supporters.
Starbucks has announced a HUGE expansion of their veteran hiring program, which Fortune Magazine reported is an attempt to make things right with conservatives. Financial analysts have put at least partial blame for Starbucks lackluster sales growth on Schultz’s outspoken liberal activism – which dates back to the early days of the presidential primary.

All this clearly demonstrates that people are sick and tired of big businesses – or at least the big cheeses running these big businesses – pushing their radical political agendas on to their customers. In a free country people can vote with their feet when they are exposed to this political bullying and intimidation.

And that is exactly what they are doing. Well done and keep it up. It is time to tell these corporate bullies to take a hike. They do not represent us and our values, and they can either get with the majority or continue to experience consumer reactions.