Here is a basic truth you can count on: in the culture wars, the other side will constantly throw at you all sorts of wild accusations, fake news, and reckless charges. Very little of it has any substance or credibility. Overwhelmingly they are just bluffing.

They simply make stuff up as they go along. And they have learned that if they can bombard you and overwhelm you with all these false claims and these mindless accusations, they can easily wear you down and silence you. That is why they do it so often. 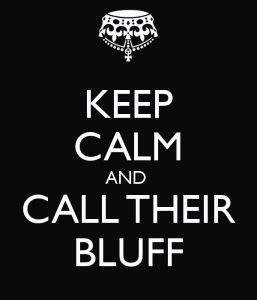 So how might we respond to these sorts of underhanded tactics? Simple: Do not let them get away with it. Call their bluff. Demand that they put up real evidence for their specious claims, or tell them to zip it! We do not have to put up with all this baloney of theirs, and we can call them out on it.

I find myself dealing with these folks all the time. It gets all rather monotonous after a while, but we have to engage with these folks. We certainly cannot remain silent and let them get away with all their howlers and porkies. So let me share a few recent examples of this.

In one recent case, I had posted an article documenting three clear cases of anti-Christian bullying and bigotry by the homosexual activists. One gal came along and claimed that our side does exactly the same thing – all the time. I replied to her more or less as follows:

Let me call your bluff here. Please provide us with the names and details of three homosexuals who have lost their jobs and been bullied and harassed in Australia in the past 24 hours.

And I mentioned how I had documented heaps of these cases in my recent book. So I continued:

Better yet, please provide us with the names and details of 165 homosexuals who lost their jobs, were fined, or even jailed from January 2011 to October 2013. Pretending there is some sort of moral equivalence here is patently false. It is overwhelmingly the other side who is doing all the bullying, thuggery and hate, no matter how much they talk about love and tolerance.

So this gal replied by saying she maybe could provide a few names, but she would need to respect their privacy and keep things anonymous. I said this in reply:

Sorry, but forget the privacy and anonymity baloney here. As stated, please provide us with real names and real cases with actual dates all publicly verifiable, not just of 3 cases in Australia over the past 24 hours, but 165 cases over the 34 month period – just as I did. If you are unable or unwilling to do this, then we will need to keep calling your bluff. Saying something is so don’t make it so. Offering hard evidence and data is what is required here, not just reckless accusations and spurious claims. The truth of the matter stands: one side is overwhelmingly doing almost all of the hating, bullying and intimidation here – and it is not the “No” side.

This gal then went on to say that she had no time or money to provide such lists – implying that I somehow did! Yeah right, I’m rolling in the dough. So I said this in response:

Let me again call your bluff (it gets rather tiring to have to keep doing so). I have as much time and funds as you claim to have. I have done all this work and documentation on my own time and at my own expense. But since you keep making these bogus claims that our side is just as intolerant and hateful as is the other side, then please, we can wait. When you have provided the 168 cases, all properly documented, then please post it here for all of us to see. In the meantime, maybe you need to ease up on the baseless claims. It sort of discredits your case a bit as we all can see.

Incredibly she then went on to say that she actually works at an institute (presumably funded with my tax dollars) that looks into this sort of stuff all the time. So by now I knew I was dealing with a rather untrustworthy individual. One minute she was whining about how she had no time or money to provide the much needed evidence, and the next minute she tells me she is working for a group that does this very thing!

Her final remarks proved that she was just bluffing her way through this entire conversation. Instead of offering any hard data to back up her spurious claims, she simply resorted to a cheap shot. She obviously saw that my website has a place where people can contribute to my work (since I get zero dollars as payment, but do it all on a volunteer basis as I seek to support my family). So she said a few silly things including this:

“Perhaps if I had my bank account details and PayPal donation options on my website, I could retire and research until the cows came home.” Oh good grief. At this point I knew I was going to get nowhere fast with this gal. So I offered a “LOL” and just left that conversation.

If people are open and willing and really want to discuss things honestly and are keen on learning something, then I am happy to spend all day with them. But when they are clearly just mischievous trolls who want to come and argue and throw out a lot of nonsense claims, then my patience grows a bit thin with such folks.

And consider another example of this. In an article I wrote on how Australian homosexuals are NOT being discriminated against, I got a gal sending in this comment:

Would you object to changing the law so that black people must sit at the back of the bus? After all, why should they complain – they still get to ride the bus. The fact they can’t choose their seat is a minor thing. Of course you would object to that. It’s discriminatory and just plain wrong. So why can’t you apply the same logic to marriage equality?
I also find your use of the phrase “destruction of the institutions of marriage and family” shamefully inflammatory and without and basis.
If It’s traditional marriage you want to uphold then shouldn’t the laws be changed so that only churches can officianate marriage ceremonies. While we’re at it, let’s make the church in charge of divorce as well because it seems the church is claiming ownership of marriage. And of course, agnostics and atheists will no longer be allowed to get married – irrespective of sexual preference.
The narrow mindedness of this whole debate is bordering on sickening. Don’t worry about your Christian cake makers. They’ll be ok if marriage equality is passed as a law. It also won’t be the start of Armageddon.
Perhaps you should be thinking about why this debate is even happening. While everyone has been fighting, the govt has changed media ownership laws – that will have a greater affect on Australian every day life than gay people getting married. What else are they up to while everyone is distracted?
And in case you’re wondering – I’m Australian, straight, non-religious and married.

My response went as follows:

Thanks ****. But let me call your bluff here – or more accurately, your various bluffs. You begin my committing the logical fallacy known as the category mistake, which involves mixing two ideas that don’t belong together. Comparing apples with oranges in other words. Past discrimination against blacks based on their skin colour has absolutely nothing to do with affirming what marriage has always been about – the union of a man and a woman. The law applies equally to all people when it comes to marriage:
-two people, one male and one female
-not a close blood relation
-not a child
Meet those basic marriage requirements and anyone can marry. Thus there is no discrimination here whatsoever.

And I have documented in a number of books and hundreds of articles just how the redefinition and destruction of marriage is already occurring. But if you want to keep your head in the sand and pretend none of this is happening that is up to you. Indeed, you have offered zero evidence or facts to make your case, but have simply engaged in name-calling and mud-slinging. There is nothing “narrow-minded” or “sickening” about being concerned about the radical assault on marriage, and how children especially are negatively impacted.

Try listening to one woman who grew up with lesbian parents, and how damaging that was to her: https://www.youtube.com/watch?v=VADJyPCLklo

And what exactly do churches have to do with traditional marriage? Marriage has always been far more than just religious based. With or without religious backing, marriage has always been the union of one man and one woman, for the good of any children so conceived. And given that not one word was mentioned about religion in this article, why did you even bring it up. Why do you seem to be so obsessed with it?

And let me call your bluff on “Christian cake makers”. They are indeed being discriminated against, bullied, fired from their jobs, and treated like scum. I have documented hundreds of cases like this in my books and articles. So too the florists, reception hall owners, photographers, printers, and others who have all been targeted by the militants. Try telling all those who have already lost their livelihood and their businesses, or been fined, or even jailed for refusing to deny what marriage is really about that Armageddon had not started. They are NOT OK as you so glibly suggest. Some have lost everything, yet you sit there in dreamland trying to tell us nothing changes when fake marriage goes through.

And of course media ownership laws have absolutely nothing to do with this debate – another red herring of yours. Sorry, but you really have contributed nothing of substance here – just the usual assortment of reckless claims, logical fallacies and the hurling of abuse. You will need to do better than that I am afraid.

As mentioned, such comments are all very typical: no evidence is provided and no actual argument is made. They simply fling a bunch of wild and baseless accusations at you and hope they can somehow win an argument. And these comments are always nicely sprinkled with ad hominem attacks and abuse. And the amount of illogical thinking could fill a book.

23 Replies to “It’s Time to Call Their Bluff”