The current debate over homosexual marriage in Australia has sadly divided many churches, and even denominations. Households have been divided, and friendships have been lost. It is such a polarising issue that many Christians refuse to even speak out about it for fear of upsetting people or alienating friends.

This issue is so vitally important that refusing to speak out is a sign of denying the gospel – yes it is that serious. It IS a gospel issue. I penned a piece recently seeking to make this case: billmuehlenberg.com/2017/09/03/marriage-gospel-issue/

As is so often the case, we have lessons that can be learned from history on such matters. There have been other times when the church was brought into massive conflict with the policies of the day, if not with the government of the day. It seems a parallel sort of situation can be found in the Protestant church in Germany in the 1930s.

Let me offer a very brief background to this. In 1932 and 1933 when the Germans voted for the Nazis, many Protestants were included in those votes. Almost immediately an attempt was made by the government to unify all Protestants in a single pro-Nazi church. 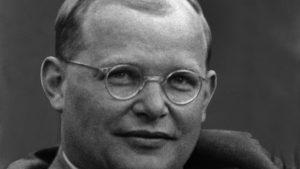 A limited number of influential Protestants, such as Karl Barth, Dietrich Bonhoeffer and Martin Niemöller were part of a movement to resist this Nazi program. They became known as the Confessing Church. In May of 1934 they met in Barmen and drafted a statement on this.

Called the Barmen Declaration, it argued that the true German Church was not an “organ of the State” and that this sort of State control over the Church was untenable, and something no true Christian could assent to. Sadly however, most Christians saw no real problem with Nazi ideology, and the bulk of them came to be known simply as “German Christians”.

Bonhoeffer and the others realised that these mainstream Christians were not on their side – they were not on the side of Christ. As Eric Metaxas puts it in his biography of Bonhoeffer:

“As would happen so often in the future, he was deeply disappointed in the inability of his fellow Christians to take a definite stand. They always erred on the side of conceding too much, of trying too hard to ingratiate themselves with their opponents.”

Some of his own colleagues thought he might have been too hard-core and too uncompromising. Some suggested he join the German Christians and try to reach them from within. He said that he could not, and offered these words: “If you board the wrong train, it is no use running along the corridor in the opposite direction.”

He said they must have the heart and soul of a Jeremiah, and stand against this great tide of evil. He spent a brief time in London, and then came back to oversee a new underground seminary for the confessing church in Finkenwalde. But things got worse with the German authorities cracking down even more.

In 1937, the Nazis abandoned all pretense of being even-handed and came down hard on the Confessing Church. That year more than eight hundred Confessing Church pastors and lay leaders were imprisoned or arrested. Their leader, the outspoken Martin Niemoller of Dahlem, was among them. On June 27, he preached what would be his last sermon for many years. Crowds had overflowed his church week after week. That final Sunday, Niemoller was no less outspoken than he had always been. From the pulpit he declared “We have no more thought of using our own powers to escape the arm of the authorities, than had the Apostles of old. No more are we ready to keep silent at man’s behest when God commands us to speak. For it is; and must remain, the case that we must obey God rather than man.” That Thursday he was arrested.
Even when being brutal, the Nazis were canny and careful. They were exceedingly sensitive to public opinion, and their approach to the Confessing Church was mostly one of ever-increasing and ever-tightening regulations. Their methods were “not so much aimed at banning the Confessing Church directly” Bethge said, “but gradually liquidating it through intimidation and the suppression of individual activities.”
They forbade the reading of intercessory prayer lists from the pulpit and revoked passports….

Much more can be said here but most of you know how things transpired. Bonhoeffer was imprisoned for a year and a half and then executed in April of 1945. Sadly there were too few Christians willing to speak out and take a stand. As Bonhoeffer’s companion Niemoller famously said:

So what does all this have to do with the marriage debate? I think many should be able to see various similarities. The churches today are as divided as they were back then. Only a handful of churches, Christians, and Christian leaders are speaking up strongly and decisively for God’s institutions of marriage and family. Most are not, and even worse, many have sided with the homosexual militants.

We know from overseas experience that when homosexual marriage is legalised, the real crackdown begins – both from the state and from those on the other side. Things are already bad here for believers who stand firm on marriage – some have lost their jobs, some have been intimidated and bullied, meetings have been forced to shut down, and acts of violence are on the increase. 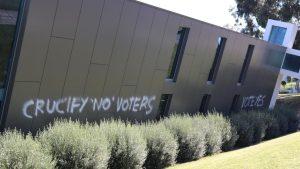 As I write this piece a Victorian church has just been attacked by those from the ‘Yes’ camp, with these phrases graffitied in large letters on the church building: “Crucify ‘no’ voters” and “Vote Yes”. Things will get much worse if and when marriage gets radically redefined.

So Christians need to decide now where they stand. Just whose side are they on? Will they stand strong on the Word of God and defend marriage, especially for the sake of our children, or will they capitulate and go along with the crowds?

I am NOT saying we are living in times identical to that of Nazi Germany, but we do see the clear polarisation of Christians on this controversial issue. We do indeed see many Christians refusing to speak up or worse yet siding with the homosexual activists.

It is time for all true believers to declare if they are with Christ or against him. Just as things like the Barmen Declaration made quite visible the division between the true church and the false church in 1930s’ Germany, this marriage debate is likewise resulting in a very tangible separation of the sheep from the goats.

So if you find yourself losing some friends and seeing old allegiances placed on shaky ground, that may not be a bad thing. That certainly happened in Germany in Bonhoeffer’s day, and it has always happened when supreme loyalty to Christ must take precedence over friendships and at times even family loyalties.

It really is that serious.

11 Replies to “The Assault on Marriage, Craven Christians, and Lessons from Bonhoeffer”