We live in an age where the last thing most folks – including most Christians – want to hear about is controversy and dogmatism. This is the sort of stuff people flee from. We have been indoctrinated into believing that the highest virtue is to simply get along with everyone, never rock the boat, and never be dogmatic in our beliefs and assertions.

After all, this is the era of “tolerance” and “diversity”. Thus we must refuse to engage in any controversial issues or topics, and above all things we must never be dogmatic. Well, that may be how the world thinks, but it most certainly is NOT how the Christian should think. 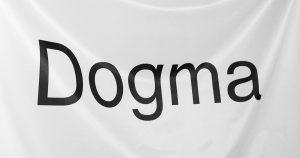 Quite the opposite. The Christian must be dogmatic, and this of necessity will result in controversy. It is not that we go out of our way seeking controversy – it just arises naturally as we seek to proclaim truth in a culture that no longer believes in truth.

Christianity is above all a religion of truth. As Francis Schaeffer put it in his vital 1981 volume, A Christian Manifesto, “Christianity is not just a series of truths but Truth – Truth about all of reality.” And when you proclaim biblical truth in a culture that despises absolute truth, controversy – and worse – is guaranteed.

But we dare not shy away from this. It is our calling as Christ followers to share his truth no matter the negative reaction. Jesus was killed on a cross for sharing truth, and his disciples also met a similar sort of fate. Church history is full of examples of the world hating Christians for sharing truth. So we had better get used to this.

But the temptation is for the church to slavishly follow the world. Therefore, far too many churches no longer proclaim truth, no longer affirm basic biblical dogma, and no longer experience conflict and controversy. They are intent on being friends with the world, on being seen as “nice,” and on being in the business of pleasing people.

Such men-pleasers are of course not God-pleasers. We all must choose here. Either we affirm and assert the hard-core truths of the gospel and risk offending many, or we seek to get along with everyone, but jettison truth in the process. It is either one or the other.

Many great Christians have spoken to this issue, and many could be quoted here. But I wish to highlight just one Christian leader, and one of his books. I refer to John Stott who wrote a very important work in 1970, Christ the Controversialist (IVP).

It is still well worth reading – indeed, even more so than when it was first penned. His opening chapter, “A Defense of Theological Definition,” is alone worth the price of the book. So valuable is it that the rest of my piece will comprise his wise words. Here are some terrific quotes from his first chapter:

Dislike of dogmatism
The first resistance to this book will be due to a dislike of dogmatism. The spirit of our age is very unfriendly towards dogmatic people. Folk whose opinions are clearly formulated and strongly held are not popular. A person of conviction, however intelligent, sincere and humble he may be, will be fortunate if he escapes the charge of being a bigot. Nowadays the really great mind is thought to be both broad and open – broad enough to absorb every fresh idea which is presented to it, and open enough to go on doing so ad infinitum.
What are we to say to this? We must reply that historic Christianity is essentially dogmatic, because it purports to be a revealed faith. If the Christian religion were just a collection of the philosophical and ethical ideas of men (like Hinduism), dogmatism would be entirely out of place. But if God has spoken (as Christians claim), both in olden days through the prophets and in these last days through His Son (Heb. 1:1,2), why should it be thought ‘dogmatic’ to believe His Word ourselves and to urge other people to believe it too? If there is a Word from God which may be read and received today, would it not rather be the height of folly and sin to disregard it?

Christian dogmatism has, or should have, a limited field. It is not tantamount to a claim of omniscience. Yet in those things which are clearly revealed in Scripture, Christians should not be doubtful or apologetic. The corridors of the New Testament reverberate with dogmatic affirmations beginning ‘We know’, ‘We are sure’, ‘We are confident’. If you question this, read the First Epistle of John in which verbs meaning ‘to know’ occur about forty times. They strike a note of joyful assurance which is sadly missing from many parts of the church today and which needs to be recaptured. ‘It is quite mistaken’, Professor James Stewart has written, ‘to suppose that humility excludes conviction. G. K. Chesterton once penned some wise words about what he called “the dislocation of humility” . . . “What we suffer from today is humility in the wrong place. Modesty has moved from the organ of ambition. Modesty has settled upon the organ of conviction; where it was never meant to be. A man was meant to be doubtful about himself, but undoubting about the truth; this has been exactly reversed. We are on the road to producing a race of men too mentally modest to believe in the multiplication table.” Humble and self-forgetting we must be always,’ Professor Stewart continues, ‘but diffident and apologetic about Christ never.’ It is hardly fair of one dictionary to define dogma as an ‘arrogant declaration of opinion’. To be dogmatic is not necessarily to be either proud or opinionated.

We are in a position now to say that a broad and open mind, so loudly applauded in our day, is by no means an unmixed blessing. To be sure, we must keep an open mind about matters on which Scripture seems to speak equivocally, and a receptive mind so that our understanding of God’s revelation continues to deepen. We must also distinguish between a doctrine and our fallible interpretation or formulation of it. But when the biblical teaching is plain, the cult of an open mind is a sign not of maturity, but immaturity. Those who cannot make up their minds what to believe, and are ‘tossed to and fro and carried about with every wind of doctrine’, Paul dubs ‘babies’. (Eph. 4:14) And the prevalence of people ‘who will listen to anybody and can never arrive at a knowledge of truth’ is a characteristic of the ‘times of stress’ in which we are living (2 Tim. 3:1,7).

Hatred of Controversy
The second way in which the spirit of the age is hostile toward the theme of this book is the modern hatred of controversy. That is to say, it is bad enough to be dogmatic, we are told. But “if you must be dogmatic,” our critics continue, “do at least keep your dogmatism to yourself. Hold your own definite convictions (if you must), but leave other people alone in theirs. Be tolerant. Mind your own business, and let the rest of the world mind theirs.
Another way in which this point of view is expressed is to urge us to be always positive, if necessary dogmatically positive, but to eschew being negative. ‘Speak up for what you believe,’ we are urged, ‘but don’t speak against what other people believe.’ Those who advocate this line have not remembered the double duty of the presbyter-bishop, which is ‘to give instruction in sound doctrine’ and ‘to confute those who contradict it’ (Tit. 1:9). Nor have they heeded what C. S. Lewis wrote in a letter to Dom Bede Griffiths: ‘Your Hindus certainly sound delightful. But what do they deny? That has always been my trouble with Indians – to find any proposition they would pronounce false. But truth must surely involve exclusions?’

Perhaps the best way to insist that controversy is sometimes a painful necessity is to remember that our Lord Jesus Christ Himself was a controversialist. He was not “broad-minded” in the popular sense that He was prepared to countenance any views on any subject. On the contrary … Jesus engaged in continuous debate with religious leaders of His day, the scribes and Pharisees, the Herodians and Sadducees. He said that He was the truth, that He had come to bear witness to the truth, and that the truth would set His followers free. As a result of His loyalty to the truth, He was not afraid to dissent publicly from official doctrines (if He knew them to be wrong), to expose error, and to warn His disciples of false teachers. He was also extremely outspoken in his language, calling them “blind guides”, “wolves in sheep’s clothing”, “whitewashed tombs” and even a “brood of vipers”.

The apostles were also controversialists, as is plain from the New Testament Epistles, and they appealed to their readers to “contend for the faith which was once delivered to all the saints”. Like their Lord and Master the apostles found it necessary to warn the churches of false teachers and urge them to stand firm in the truth.
Nor did they regard this as being incompatible with love. For example, John the apostle of love, to whose pen we owe the sublime affirmation that God is love, and whose Epistles abound in entreaties to mutual love, roundly declares that whoever denies that Jesus is the Christ is a liar, a deceiver and an antichrist. Similarly Paul, who gives us in 1 Corinthians 13 the great hymn to love, and declares that love is the firstfruit of the Spirit, yet pronounces a solemn anathema upon anybody (human or angelic) who presumes to distort the gospel of the grace of God.

We seem in our generation to have moved a long way from this vehement zeal for the truth which Christ and his apostles displayed. But if we loved the glory of God more, and if we cared more for the eternal good of the souls of men, we would not refuse to engage in necessary controversy, when the truth of the gospel is at stake. The apostolic command is clear. We are “to maintain the truth in love,” being neither truthless in our love, nor loveless in our truth, but holding the two in balance.

I could keep on pulling solid nuggets out of this opening chapter, let alone the entire book. It is a classic, and the truth he wrote about nearly a half century ago is even more necessary to share today. I urge you all to grab a copy of this book (it is still available) and remind yourself of the importance of truth and doctrine, and the inevitability of controversy.

2 Replies to “In Praise of Controversy and Dogmatism”