All cults have several common features. A quite basic one is this: once a person gets sucked into it, it is very difficult to get out of it. Indeed, it is seen as an act of treason and betrayal to seek to leave the cult. That in part is what makes cults so dangerous and so sinister.

So too with the trans cult. Once a person has transitioned, it becomes heretical to want to detransition. Those who first make the change are celebrated and treated as celebrities. But those who dare to have second thoughts and wish to go back to the way they were from birth are treated as pariahs and lepers. 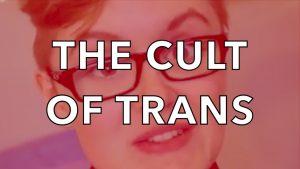 Political correctness here reigns supreme, while science, logic, and common sense get thrown out the window. As just one more example of the irrationality of this cult – and all cults thrive on irrationality and unreason – consider this lulu of a claim.

The following post just appeared on the social media. Assuming it is true, it tells us all we need to know about the trans cult and its war on reality. It went like this: “Heterosexuality is a phase we should all try to grow out of. I mean it’s 2017, people. It’s ok to step outside the stuff you were taught as a kid. We are not children anymore.”

But radical sexual militants and ideologues have long ago declared war on reality, war on science, and war on biology. A helpful recent piece on this which I have cited before finishes with these words:

Regardless of how politically incorrect the evidence may be, and even while we accommodate the privacy and safety concerns of those who identify as transgender, we must also draw a sober and honest conclusion about the human costs of sex reassignment.
The best medical science, social science, philosophy, and theology coalesce. As Heritage Foundation senior research fellow Ryan Anderson puts it, they reveal that sex is a biological reality, that gender is the social expression of that reality, and that sex reassignment surgeries and treatments are therefore not good remedies for the distress felt by people with gender dysphoria.
The most helpful therapies for gender dysphoria, therefore, will be ones that help people live in conformity with the biological truth about their bodies.

The flight from reality, the war on reason, and the “sin” of leaving the cult – these are all features of a cult. Let me focus more on the idea of detransitioning, or retransitioning. This is now becoming a growth industry. Just as tattoo removalists are rolling in the dough with so much work, the same here.

High rates of depression and suicide are characteristic of those who have transitioned, and the desire to leave this altered state of reality is also very common. All this of course is not being told you by the mainstream media. So let me tell you about it.

The stories are so numerous I can only offer a few representative cases. One that got a lot of airplay recently goes like this:

With guidance from medical professionals and his own mother, a 12-year-old Australian boy suffering from gender confusion began to transition into a “female.” Just two years later, the young man told his mom he felt like his born sex again, and is now in the painful process of transitioning back, which includes surgery.
Patrick Mitchell was diagnosed with gender dysphoria at age 12, meaning he viewed himself as a female although he was born a biological male.
“When he was young, he would dress up in girl’s clothes. And at one stage, he did say to me, could he be taken to the doctor to be made a girl,” said the boy’s mother. Although he was just a child, Mitchell was put on estrogen hormones to begin his transition. He subsequently began to grow breasts and also grew out his hair.
“You wish you could just change everything about you, you just see any girl and you say I’d kill to be like that,” Mitchell, now 14, told 60 Minutes Australia. Now, just two years since the start of his transition, Mitchell says he feels like his biological sex.

Consider also the story of Noor, who believed she was male from age 11-13, but has since changed her mind:

What made you change your mind?
I realized that the only reason I was trans was because I wanted to feel big and safe and also, I didn’t conform to what I thought being female looked and felt like. But then I learned that being female isn’t a feeling. It’s a biological reality and I could feel however I feel without it meaning I was male….

What would you say to other girls who think they are boys? Any advice for them?
There’s nothing wrong with your body. To be straightforward, you will never be male. You will never have a Y chromosome. You will never have a real penis. Stop hurting yourself. Not wanting to be female doesn’t mean you’re really male. Not wanting to be female makes sense when girls are sexualized before we’re ready to even feel sexual, and when people think we’re weak both intellectually and physically, when people don’t take us seriously, when people tell us to smile and be nice.
You weren’t born in the wrong body because that’s not possible.
You were born into a society where looks mean everything. But really our bodies are just what keep us alive. Why don’t we fight back against the idea that any person looks wrong as they are? Your “outside” doesn’t need to “match your inside.” The outside isn’t important enough to hurt yourself over.

Another recent piece looks at two cases of detransitioning. It concludes as follows:

Taylor’s advice to those questioning themselves is ominous: “Our physical bodies, with genitalia and chromosomes, exist in reality, and part of having a body is hating your body. You are taught to hate your body no matter who you are, male or female, and you are falling for it.”
It isn’t all rainbows and book deals. Trans teen idol Jazz Jennings speaks freely about the glamour of embracing one’s self, but little has been published on the complications regarding Jazz’s bottom surgery. His doctors said there wasn’t enough “raw material” to work with due to Jazz’s early consumption of puberty blockers, which stunted genitalia formation.
Undergoing gender reassignment is regarded as the Holy Grail for those struggling with their sex. When the potentially fatal outcomes are not adequately tracked, however, shouldn’t honesty be the priority when speaking about the lifelong effects of the transition process?
Paul’s advice to children looking to transition? “Don’t.”

One final article. This one deals with some specific cases, as well as the bigger picture:

Jackie came out to friends and family first and then posted a note on Facebook. She was adopting new pronouns, the note said, and she would like her community to respect that. It looked, at first, like a typical coming out circa 2017, one of many posted online every day as more and more people come out as transgender, nonbinary, or genderqueer. But Jackie’s post was different. She wasn’t coming out as trans, she was coming out as de-trans.
Jackie is among an emerging population of people who have transitioned to a different gender and then later transitioned back. This has ignited a contentious debate both in and outside the trans community, with various sides accusing each other of bigotry, harassment, censorship, and damaging the fight for trans rights….
There have, however, been almost a dozen studies of looking at the rate of “desistance,” among trans-identified kids—which, in this context, refers to cases in which trans kids eventually identify as their sex at birth…. The exact rate of desistance varied by study, but overall, they concluded that about 80 percent trans kids eventually identified as their sex at birth…. But the most recent study, published in 2013 in the Journal of the American Academy of Child and Adolescent Psychiatry, followed up with 127 adolescent patients at a gender identity clinic in Amsterdam and found that two-thirds ultimately identified as the gender they were assigned at birth.

These stories need to be told. It is time to break out of the trans cult, and let the truth about it be heard far and wide, to prevent more harm to vulnerable young people.

10 Replies to “The Trans Cult Really is a Cult”