A noble cause of course. Certainly there is far too much violence against females. Sure, there is also a very real problem about male victims of female violence, but that does not get discussed very much. But leaving that aside, one can and should support – at least in principle – any moves to lessen violence against women. 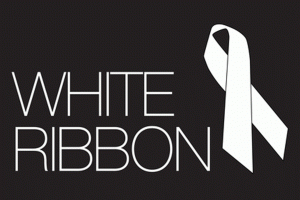 So why say goodbye to it? Well, sadly it has gone down the path that so many other once good organisations have. It has decided to add some agenda items to its core mission – agenda items which not only are not part of their original charter, but which in fact undermine it.

I refer to the fact that White Ribbon has proudly and unashamedly jumped on board the pro-abortion bandwagon. And this is not a new thing. Refer to this article from a year ago:

White Ribbon has distanced itself from a Queensland MP who linked himself to the domestic violence organisation while promoting anti-abortion views. The Liberal National Party’s Cleveland MP Mark Robinson last week referred to himself as a “White Ribbon man” in a Facebook post discussing a bill from independent MP Rob Pyne’s bill to decriminalise abortion in Queensland.
Mr Robinson said he pledged to never ignore domestic violence, saying that he could not support the proposed reform because it “removes protections for women against violent partners who are forcing them to abort the babies they want to keep”. White Ribbon this week rejected any link to the MP and clarified it supports a woman’s “fundamental human right” to choose.

This is what it had to say:

White Ribbon is aware that Queensland MP Mark Robinson is referencing White Ribbon in his social media campaigning against a bill to decriminalise abortion in that state’s parliament. We want to reassure our supporters that White Ribbon advocates for a woman’s right to choose. It is a fundamental human right. Mark Robinson is not and never has been a White Ribbon Ambassador. He refers to himself as a “White Ribbon man” but any man associated with us should support a woman’s right to have choice over the decisions that relate to her body and reproductive rights, especially if she is a victim of violence.

And that support has just recently again come to the surface. As an article from yesterday put it:

White Ribbon Australia, known as the “Say no to violence against women” organisation is under scrutiny for supporting late-term abortion. The nationally-recognised charity has also entered the Queensland election fray by supporting the “It’s Not 1899 Campaign” by Pro Choice Queensland.
White Ribbon is named alongside organisations supporting candidates in the current Queensland election who have made a “pro-choice” pledge to “vote to remove abortion from the criminal code”.

Yet most folks would still not know that this is the case. So one terrific prolife couple from Adelaide has been seeking to raise awareness of all this. Trevor Grace and his wife Robyn have been campaigning on this, trying to alert White Ribbon supporters to rethink their support of the group.

They have sent the following letter out to various churches, notifying them of the issue:

Dear Reverend …..
As a Christian organisation we have become aware that some Catholic Churches and, Catholic organisations and Catholic Schools in Queensland and Australia are supporting White Ribbon Australia. However, you may not be aware that White Ribbon endorses abortion. In fact they go further and are campaigning for decriminalisation of abortion and unequivocally advocate for late term abortions – which is the killing of unborn babies 20 plus weeks to birth. Ironically, for an organisation against violence towards women and girls, White Ribbon has no problem supporting violence against females in the womb.
White Ribbon Australia has also joined a coalition with other pro-abortion organisation such Family Planning Alliance, Children by Choice, Pro Choice Queensland, Marie Stopes, The Sex Party, Emily’s List, etc, in an attempt to remove all abortion restrictions.
See >> prochoiceqld.org.au/aboutthecampaign/itsnot1899-campaign-supporters/ .

Well done Trevor and Robyn for taking a stand here and alerting the wider community to this. The irony here should be lost on no one. At least half of all abortion victims are of course female. And the numbers are much higher in places where sex selection abortion targets female babies, such as India and China.

So how bizarre and ironic that an organisation that claims to want to stop violence against females is supporting one of the most violent and deadly things there is for females: abortion. The simple truth is, the abortion ethic is the ethic of violence against women.

If we can slaughter female babies by the millions in their mothers’ wombs, we can mistreat and abuse females anytime and anywhere. If we are serious about ending violence against females, we must start with abortion. Social justice begins in the womb, and until we stop the violence there, it will be very difficult indeed to stop it anywhere else.

Seeking to reduce violence against females is always a good thing. But we can best work toward this end by not supporting those groups which are hypocritical and duplicitous about this. Other groups are hopefully out there doing similar work, yet not supporting the war on the unborn. Support them instead.