We have long known that there is a very real connection between women having abortions, and an increased risk of developing breast cancer. The abortion industry, a compliant and PC media, and activist politicians all deny this of course, and pour out their wrath on anyone who dares to make these claims.

We have a perfect illustration of this unfolding as we speak. It seems one brave Australian Senator was willing to tell the truth about this, and for daring to do so, he is facing all sorts of abuse and censure. Consider the headline: “AMA and Greens criticise Senator Eric Abetz for making false link between cancer and abortion”.

“False link”? Nothing like pro-abortion activists and their media stooges banding together to highjack the truth and mangle the facts. The article begins:

Senator Eric Abetz’s comments linking abortion with breast cancer are an insult to all women, says acting Greens Leader Adam Bandt. Senator Abetz appeared on Channel 10 program The Project last night and was asked if he believed the “factually incorrect” statement that abortion leads to breast cancer. “I think the studies, and I think they date back from the 1950s, assert that there is a link between abortion and breast cancer,” he said.
The senator then said there were organisations, other than the Australian Medical Association (AMA), that had differing opinions. Mr Bandt has demanded Senator Abetz apologise for his comments and not attend the upcoming World Congress of Families conference.
“Eric Abetz’s comments are an insult, not just to any woman who has suffered breast cancer or who has had an abortion, but to all women,” the MP said. “The minister should not scare young women by peddling his dark, anti-choice ideology on national television. This is a Government of old men who do not share modern Australian values”…
AMA President Associate Professor Brian Owler appeared to hear things differently. Last night he told media the senator had “cherrypicked” old information skewed toward an anti-abortion ideology. 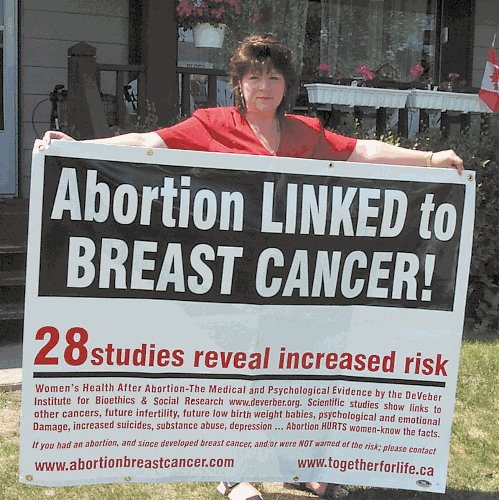 An “insult to women”? “Cherrypicked”? So who is right here? The truth is, there is a growing scientific awareness of the relationship between abortion and breast cancer. One American expert, Dr Joel Brind, an Endocrinology Professor, has said that “the single most avoidable risk factor for breast cancer is induced abortion.”

As he states elsewhere: “By way of background, abortion raises a woman’s risk for breast cancer in two ways; the debate is over the second, not the first. Scientists have long understood that the risk of breast cancer is reduced when a woman completes a full-term pregnancy. This ‘protective effect of childbearing’ is lost with an abortion. The second way abortion increases the likelihood of breast cancer is that an abortion leaves a woman with more cancer-vulnerable breast tissue than she had before she became pregnant.”

Many studies can be mentioned here. A study in Sri Lanka found that abortion triples risk of breast cancer in women, as one discussion notes:

A new study coming from researchers in Sri Lanka finds women who had abortions more than triple their breast cancer risk compared with women who carry their pregnancy to term. The study was published in the journal Cancer Epidemiology and found a 3.42 odds ratio against women having abortions compared with those who kept their baby.
Abortion was the most significant factor in the study on breast cancer risk and researchers found a significantly reduced risk associated with prolonged duration of breastfeeding a newborn. Malintha De Silva and colleagues from the University of Colombo led the study.
The Sri Lankan study is the fourth epidemiological study in fourteen months to report an abortion-breast cancer link, including studies from the U.S., China and Turkey. Other studies have shown the protective effect a full-term pregnancy has for women.

A study in India also demonstrates this link, showing that abortion raises the breast cancer risk six-fold. One report says this about the findings:

A study published in the Indian Journal of Community Medicine (May, 2013) found a 6.38-fold greater risk of breast cancer among women with histories of induced abortion. The study, led by Ramachandra Kamath, MD (Department of Public Health, Manipal University), found induced abortion was the most important risk factor….
The authors found a non-statistically significant 1.76-fold risk increase among women with first births after age 30. “Medical texts acknowledge delayed first full term pregnancy is a risk factor for breast cancer. It’s indisputable that abortion contributes to delayed first full term pregnancies; and in some cases, women remain childless forever, which is also an accepted risk factor.” Kamath’s group observed that India has the “largest estimated number of breast cancer deaths worldwide,” and breast cancer rates are on the rise there.

A more recent examination of the data makes this point even stronger. As Dr Brind writes,

A new systematic review and meta-analysis of abortion and breast cancer (ABC link) in China was just published four days ago in the prestigious, peer-reviewed international cancer journal, Cancer Causes and Control. In this meta-analysis (a study of studies, in which results from many studies are pooled), Dr. Yubei Huang et al. reported that, combining all 36 studies on the ABC link in China that have been published through 2012, the overall risk of developing breast cancer among women who had at least one induced abortion was significantly increased by 44%.
These results, said the authors, “were consistent with a previously published systematic review”. That review was the one I published in the British Medical Association’s epidemiology journal with colleagues from Penn State Medical Center in 1996, which study reported an overall significant 30% increased risk of breast cancer in worldwide studies.

This is just a small sampling of the evidence. But pro-deathers and secular left activists hate to let the truth and evidence get out in this debate. They prefer to cover it up and demonise those who share it. Well done to Eric Abetz for having the guts to stand up and speak truth on this vital issue, even when it is unpopular to do so.

Women certainly deserve to hear the truth about this.

31 Replies to “Abortion and Breast Cancer”