OK, the next US Presidential election is not scheduled for another few years, but the Party that lost the unlosable election in 2016 is already sniffing out possible candidates. And a speech at a Golden Globes ceremony may have given them what they are after: a leftwing celebrity messiah.

The Hollywood liberals were in a frenzy after talk show host Oprah Winfrey gave a speech the other day at the famous awards’ night. As one news report puts it:

Oprah Winfrey fans have lit up Twitter with calls for her to run for US president after the entertainment star gave an inspiring “new day” speech at the Golden Globes in support of those who have exposed sexual misconduct in Hollywood and beyond.
A surge of tweets carrying #Oprahforpresident and #Oprah2020 hashtags followed her speech, where Winfrey became the first African-American woman to receive a lifetime achievement award on Sunday.
Winfrey, an actress, movie and television producer, and chief executive of her OWN cable channel, is actively thinking about a run, CNN reported on Monday, citing two of her close friends. CNN did not name the friends, who it said had spoken on condition of anonymity. At least one emphasised that Winfrey had made no firm decision on a run.
Sunday’s award ceremony honoured Winfrey, 63, as a role model for women and a person who has promoted strong female characters. “In a 9 minute speech, @Oprah was more presidential than the current occupant of the White House has been for an entire year,” wrote Khary Penebaker, a member of the Democratic National Committee, on Twitter. 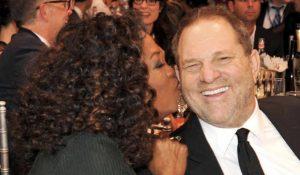 The mainstream media was fawning over her and her talk, and everyone now seems to have her written in as the next Democratic candidate for POTUS. The liberal NBC even tweeted “Nothing but respect for OUR future president. #GoldenGlobes.” They later had to embarrassingly retract the tweet.

The same actresses who are now condemning strong, powerful men in Hollywood were just recently cozying up to them and singing their praises. Film director Roman Polanski was accused of rape, yet folks like Meryl Streep had sung his praises with a standing ovation. Oprah herself was seen cuddling up to Harvey Weinstein not long ago. On and on it goes.

This hypocrisy is typical of the Hollywood left. English commentator Melanie Phillips just wrote about this event. She says:

It’s hard to recall a more egregious display of vanity signalling than the black dress protest. It was “please snap me while I pose in my conscience”. MeToo! MeToo! Shortly before the awards there was a major crisis. Forget Iran, Syria or North Korea. So many Hollywood consciences needed to be on display that designers and stylists were reportedly running out of black attire and having to rush in more from their fashion bases in New York.

The hypocrisy is epic. Many actors expressing such outrage use sexual chemistry to attract the predatory male movie executives they then profess to despise. They habitually wear outfits that leave little to the imagination, split upwards or downwards or utterly transparent. What’s more, many of the movies and TV series in which they appear, some of them having forgotten to put on any clothes at all, have long crossed the line into soft porn.
Among all the exaggerated outrage, however, there have been victims of real, horrific, sexual violence. Yet many of those blustering in black at the Globes knew about this behaviour but kept quiet about it in order not to jeopardise their careers.
When Roman Polanski won the Oscar for best director in 2003, he wasn’t present at the ceremony. He had fled to France after being charged in 1977 with rape, sodomy and other offences against a 13-year-old girl and had pleaded guilty to engaging in unlawful sexual intercourse with a minor.
When his award was announced, however, Meryl Streep, among others, leapt to her feet to give him a standing ovation. No matter: there she was at the Globes displaying her principles and courage by wearing a long black gown instead.
Where is this outrage going to draw a line? The Academy of Motion Picture Arts and Sciences is in disarray over the fact that, having expelled Harvey Weinstein for his sexual aggression, they face similarly having to ban dozens of A-listers — Kevin Spacey, Dustin Hoffman, Ben Affleck and many more — who have also been outed (with some denials) in the Great Casting-Couch Terror.

Millions of women around the world really do suffer in cultures where male violence towards women is a given; but on those victims, these Hollywood hypocrites are silent. In cultures they choose to present as victims of western colonialism, they simply ignore the all-too real oppression of women. They profess “solidarity” with oppressed women; but of course, it’s really all about themselves.”

Or as Ben Shapiro put it:

It wasn’t just Oprah: actor after actor stepped to the microphones and virtue signaled about the lack of female power in Hollywood. They all wore black dresses in solidarity with sexual abuse victims, and spoke in support of Time’s Up, a movement to end such abuse. All of which is great! Except that watching Hollywood decry sexual abuse feels like watching NFL executives decry concussions: these people have been making bank on a town that thrives on sexual abuse. Watching them fete themselves for their newfound heroism is galling, to say the least.
During Oprah’s speech (she of the multiple pictures kissing Harvey Weinstein), we watched a cutaway to Meryl Streep (she of “God, Harvey Weinstein” fame and the standing ovation for Roman Polanski). If that doesn’t say all that needs to be said about Hollywood, nothing does.
But we’re supposed to cheer Hollywood for its newfound wokeness. We’re supposed to pretend that their message of empowerment has nothing to do with being caught with their hands up skirts. We’re supposed to believe that these thoughtleaders who cheered Woody Allen just six years ago when he received a Lifetime Achievement Award at the Golden Globes should continue to be our thoughtleaders on issues of protection against sexual abusers. Spare me.

They all praised and befriended the predators and begged to be in their films when their career ambitions were best served by doing so. But now that Weinstein and his ilk are no longer useful, their former lickspittles are happy to jump on the dogpile. It’s phony. All of it. It’s a charade. It’s theater. These people are doing the only thing they know how to do: acting.

So all the black gowns, and the speech by Oprah – as moving as it might have been – were drenched in hypocrisy. As to Oprah, if she does indeed consider making a run for POTUS, we need to know more about her – we need to keep in mind what Oprah is really all about.

As I have documented before, she is actually the biggest promoter in the world of New Age baloney. See here for more on this: billmuehlenberg.com/2009/06/18/the-gospel-according-to-oprah/

As I said back then:

Who is the number one promoter of New Age philosophy in the world today? Is it Eckhart Tolle? Rhonda Byrne? Dan Brown? Marianne Williamson? Nope. The numero uno New Age evangelist is by far Oprah Winfrey. When Oprah says jump, people ask, ‘how high?’
Unquestionably, Oprah Winfrey is the most influential woman in the world today. The television show host, author, publisher, actress, philanthropist, and media personality is a multi-millionaire, and when she speaks, people – especially her legions of dedicated female followers – consider her utterances to be almost divine revelation.

As I said elsewhere, it would not surprise me if she did run, and she had someone like Osteen as her running mate. But, you say, they have no political experience. So what? Sadly so much of America is so dumbed down right now, so caught up in an entertainment culture, and so utterly obsessed with celebs, that they would lap up this dream team.

Two of the most popular folks in America right now who both share quite similar views on life. I would not be surprised at all if such a combination both ran and won – that is how bad America now has become. It worries me greatly to be honest.

But as I say, it is early days yet. But the hysteria about Oprah among the left right now is at fever pitch, and she may well be their messianic hope for 2020. Time will tell.

11 Replies to “Oprah for POTUS, and Other Scary Thoughts”