I had not planned to write a piece on the passing of the great evangelist Billy Graham. After all, what more could be said about the man that hasn’t already been said a million times over? But watching the very moving live streaming of his funeral was enough to prompt me to say at least a few words about him.

I will do this in two ways. First, I will offer a few snippets about the man, and then I will quote from a few of my earlier articles about him. The details about his life are pretty well known. Let me offer a very brief outline based on a piece from the Billy Graham Evangelistic Association website: 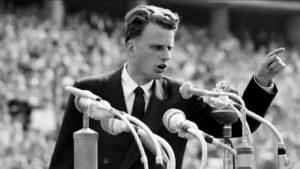 He was born on November 7, 1918 in North Carolina, and raised on a farm near Charlotte. At age 15 in 1934 he was converted at an evangelistic campaign. In 1939 he was ordained as a Baptist minister. He graduated from Wheaton College in Chicago in 1943. While there he met fellow student Ruth McCue Bell, the daughter of a missionary doctor. He married her in 1943 and enjoyed her company for 63 years. She died in 2007.

His first major evangelistic crusade was in Los Angeles in 1949, and his last crusade was in New York in 2005. Much of the rest is of course history. It is said he preached to some 215 million people in more than 185 countries and territories, with hundreds of millions more reached through television, video, film, and webcasts.
https://billygraham.org.au/billy-graham/

Of course out of all these who heard the evangelist, God only knows how many were actual converts who stayed true to God, walking with Christ for the rest of their lives. Many were likely just a flash in the pan, who had an emotional reaction at one of his meetings. But many – most? – were soundly converted, and hopefully discipled through local churches.

He died on February 21st, age 99. Such was his stature that on February 28 and March 1, he became the fourth private citizen in United States history to lie in honor in the United States Capitol rotunda in Washington, D.C.
https://edition.cnn.com/2018/02/28/politics/reverend-billy-graham-us-capitol-lie-in-honor/index.html

As to some of my past writings on the man, let me cite two of them. In June of 2007 I wrote “Two Men Who Shaped Nations”. It was a real study in contrasts. One man was of course Graham. The other was Playboy’s Hugh Hefner. They are now both dead, and their lives could not have been more different. As I wrote over a decade ago:

There are two elderly Americans who have both made a profound impact on not only America but the rest of the world. One is a man who renounced self and dedicated his life to his God and the welfare of others. The other, who has snubbed God altogether, has made a name for himself as one totally absorbed with himself, and his lusts.

I concluded my piece this way:

The contrast could not be much greater. Yet there is one fundamental commonality that unites the two men. Both are sinners. The only difference is, one acknowledged his sin early on, and turned to the finished work of Christ for a new life. The other still wallows in his old life of sin and selfishness. And such are the options for all of us. There are in the end only these two options. May we choose wisely.
https://billmuehlenberg.com/2007/06/20/two-men-who-shaped-nations/

In March of 2010 I wrote about him again, comparing him with someone who had just died; Father Paul Marx, the founder of Human Life International. In my piece I had reflected on the autobiographies of the two men:

In my piece I said that they shared a number of common features, and there were a number of parallels between the two lives. I wrote:

A number of other similarities emerged: both are nearly 80; both grew up in rural America on dairy farms; both men’s families lost nearly all in the great depression; and both knew early on that they were to make an impact on their world.

Both men have rejected racism, ensuring that blacks and whites alike took part in their work. Also, both recognised the importance of working together with people from differing religious persuasions. Thus Marx made a point of working with Protestants where possible, and Graham encouraged working together with Catholics. Both also sought to work with Jewish groups as well whenever feasible. Thus ethnic and religious bigotry were notably absent from their ministries.

Early on in his ministry Graham had made a point of ensuring that no hint of scandal be found in his organisation. Back in 1948 he and his team decided to set out a group of resolutions which would guide their work in the future. The first point was to be totally open and accountable concerning finances. The second commitment was to avoid all hints of sexual immorality. Third, the team resolved to always work together with local churches, and seek unity wherever possible. Fourth, they determined to be unflinchingly honest about numbers – the number of conversions, etc. No exaggerations, no misrepresentations.

Between these two men, probably every country on earth has been visited. They are both remarkable for their travels and countless speaking engagements. Many a younger man would not have kept up with the gruelling schedules, the sleepless nights and the strange surroundings. Both men, although now well advanced in years, are still fully devoted to their cause, although Graham is slowed down by Parkinson’s disease….

Both men have been to Australia on numerous visits. On one visit to Australia, when South Australia legalised abortion in 1970, Fr Marx gave 31 lectures in 30 days to stave off further attempts to spread abortion. He left behind a manuscript on euthanasia which was published as The Mercy Killers. Well over a million copies were to be sold or distributed.

Billy Graham is best known for his overflow crowd at the Melbourne Cricket Ground. On one Sunday afternoon in March 1959, 143,750 people crammed into the Melbourne Cricket Ground to hear Graham preach. It was his largest crowd to date, and the biggest crowd ever assembled at the MCG. Graham’s largest audience was in Seoul, Korea, in 1973, when over one million people crowded into an open air plaza to hear him speak.
https://billmuehlenberg.com/2010/03/31/fr-paul-marx-rip/

So what made Billy Graham tick? Obviously, he had a deep and abiding love for God and for man. That is all one needs really. And he simply took to heart passages like Romans 10:13-15:

Some of you know a bit about church history and have read about the great Christian preachers, revivalists and evangelists of the past such as the Apostle Paul of old, or more recently, George Whitefield, Charles Spurgeon, Charles Finney, Jonathan Edwards, etc. I, like many others, have often wondered what it would have been like to have actually heard such preachers.

Well, many of us got to hear – either in person, or on video – what Billy Graham was like as a preacher. My wife and I for example heard him in Amsterdam at the International Conference for Itinerant Evangelists, in July 1983 where we helped out as volunteers.

So we know a little bit about what it is like to actually hear, if not see, a great evangelist for Christ. Yes, there have been others, and there will be others. But in many ways the life and ministry of Graham was unique. He will be missed by millions.

He has run the race and finished the course that God laid out for him, and now enjoys his eternal reward of being with the one he most loved, Christ his Saviour. As always, such moving examples of godly faith inspire us to also make a difference for Christ and the Kingdom.

This quote of his has gone viral during the past week or so, and is still worth running with: “Someday you will read or hear that Billy Graham is dead. Don’t you believe a word of it. I shall be more alive than I am now. I will just have changed my address.”