Homosexuals cannot reproduce – they can only recruit. Therefore, seeking to drag children into their sordid lifestyle has always been a big part of the way they operate. This has been going on for decades now, and is getting worse. I have documented all this in my 2011 book, Strained Relations.

Let me offer just one very revealing quote – out of many – from that book: 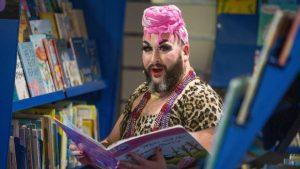 So anything they can do to get access to our children they will try. And lately they have been pushing a new tactic: having drag queens come into public libraries and read stories to very young kids. That is just another way to soften them up and to seek to normalise the lifestyle of the militants.

Just recently in Wollongong in NSW we had this happen, with homosexual activist Roxee Horror (Adam Larkham) doing his thing with young children. Overwhelmingly of course the mainstream media sided with him and denigrated parents and their concerns.

For example, one activist journalist who prefers making editorial comments instead of simply reporting the news, said this about the event: “the seemingly harmless event has raised the ire of hundreds on social media”.
www.weeklytimesnow.com.au/protesters-accuse-nsw-library-of-spreading-propaganda-with-drag-queen-event/news-story/be551e306a2fc5446492becc5e8a8f5f?nk=4eb9eec5ef94761caf7b0f3843fb713f-1532324420

Um, so just tell very concerned parents that they should just butt out because this is no big deal. No way bud. Targeting our children, seeking to promote a dangerous and high-risk lifestyle, and seeking to push adult sexuality on innocent and vulnerable children is NOT just harmless fun. It is pernicious and deliberate activism that should not be promoted with taxpayer dollars.

Indeed, one simply has to type the name of this drag queen into a search engine and look at what comes up. Various pages, including Facebook pages, show us just how perverse and raunchy this guy really is. If he wants to push all this on other adults that is one thing, but he should NOT be targeting our innocent children with his adults-only lifestyle.

If these militants want to promote their immoral lifestyle, they should do it on their own time and with their own money, and not make parents who oppose such activism subsidise it with their hard-earned tax dollars. But plenty of our “public servants” have been pushing all this.

The library’s manager fully supported it and said they should cater to all groups. But as one woman told me who was part of a peaceful protest there, ‘What if we tried to have a Christian reading event take place there? Would they allow that to take place as part of their push for diversity? Somehow I don’t really think so!’

A librarian there introduced the reading by saying that love means having all different sorts of families. Yeah right. City councillors were also there promoting and celebrating the event. However, all the protests of concerned parents found on the social media and elsewhere were simply ignored.

As mentioned, thankfully a few small groups showed up on the day to have a peaceful presence and to pray over the situation. Television crews ignored them while filming the event inside the library. Moreover, local and state media have been tirelessly promoting and championing the event, before, during and afterwards.

This is not the first such event in NSW. For example, in Lithgow in May another similar library activity took place. At that event drag queen Martina Concepta “read ‘Be Who You Are’ by Todd Parr and performed the similarly titled song ‘I am what I am’ by Gloria Gaynor.”
www.lithgowmercury.com.au/story/5404655/be-who-you-are-drag-queen-hosts-story-time-at-library/

Of course overseas these events have been happening quite regularly now. As always, the militants know the value of targeting our children, and of how effective it is to reach them while they are so very young. And it is a direct assault on faith and family values as well.

A few days ago Canadian writer Jonathan Van Maren got it right with this headline: “Drag queens at public libraries: the new strategy to indoctrinate kids and sideline Christians”. He says this:

These days, public libraries have now joined the growing list of places that are showcasing the LGBT movement to children, with activist groups sponsoring drag queens to read “LGBT-friendly” books to the boys and girls who assemble for these events.

In Toronto, drag queens have been brought in to read stories like My Princess Boy to children and pitch the tenets of transgenderism. As the Globe and Mail described it: “As part of the new LGBTQ kids programming, Toronto Public Libraries across the city host story times with drag queens. The drag queens read stories of acceptance, diversity and all different types of families, then have dance parties or sing.” The Burlington Public Library hosted the same program last year.

In Edmonton, drag queens have been invited to the Edmonton Public Library in an initiative championed by the University of Alberta’s Kristopher Wells, a cheerleader of the NDP’s aggressive attacks on Christian schools. Prancing about in enactments of “Five Little Monkeys Jumping on the Bed” and reading stories like The Boy Who Cried Fabulous, one drag queen told the CBC that “it’s important to broaden children’s horizons in a way that lets them know they should be themselves”—and that because “Edmonton’s still a very conservative climate” it is important that “young impressionable children” are exposed to non-binary people.

The Calgary Public Library upped the ante by hosting story-time with both a drag queen and king, sponsored by Calgary Pride. “The conversation as it relates to gender expression has only just begun” Calgary Pride executive director Laurissa Chapple told Global News. “This is a gentle fun way to introduce that conversation to little people in a way that’s a lot easier for them to understand.” Stories showcasing LGBT concepts are featured, with drag queen Felicia Bonee stating that, “It’s just a great way to introduce them to the concept [that] you can be whatever you want to be and you can make your dreams come true.”

LGBT activists are determined to teach their ideology to children, and have focused their efforts on infiltrating the public school system, influencing the sex education curriculum, and ensuring that the concepts such as gender fluidity are taught from the earliest possible age. Now, it seems, they have successfully managed to insert themselves into the children’s programming of public libraries right across Canada and the United States—with the enthusiastic approval of the library staff. Drag queens and children’s stories about transgenderism are in—and so, again, at yet another venue—Christian parents must be out.

Exactly. The attempt to recruit children into the dark world of the sexual activists is ever ongoing, and the militants keep finding new ways to win the indoctrination and proselytising wars. Parents be forewarned.

14 Replies to “Libraries and Drag Queens: Activists Targeting Our Children”