Thankfully we now live in such liberated times. We have turned our backs on all the old superstitions and all the repressive beliefs of the past. We have freed ourselves from narrow, bigoted and outdated understandings, and soared into the brave new world of meality.

Finally, we have renounced the tyrannical notion of reality, and made ourselves the centre of all things. And not a moment too soon. Meality is what matters, not intolerant and spiteful reality. We finally get to decide for ourselves what is and what ought to be. No more oppressive external standards to bow down to. Liberation at last! 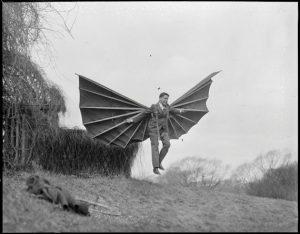 Of course there are still a few of these relics from the past that must be fully and finally repudiated. We still have some archaic and outdated beliefs that chain us down. Time to destroy every last one of these dinosaurs. Free to be me! Meality rules.

Probably one of the most dangerous and bigoted and reactionary of these beliefs yet enslaving us is that putrid law of gravity. How many people have been kept in artificial cages because of this stifling social construct? It is time to fully renounce this repressive concept.

Who will lead the way here? Who will rid us of these ugly chains and lead us into true freedom? We need brave and liberated individuals to lead the charge here. I propose the following: masses of progressives who want to end the tyranny of gravity will head to the tallest skyscrapers they can find.

They will race to the top of the building, stand near the edge, start flapping their arms like mad, and jump. Liberation! Freedom! Self-determination! If these folks identify as birds, who are we to judge their feelings? If these folks want to be rid of the oppressive imposition of stifling gravity, more power to them. Meality wins!

The flight from reality

Um, let me point out a few home truths here. Anyone who does follow my advice and takes a flying leap off a tall building will very quickly discover the cold hard reality of the pavement below. Death will be the most likely outcome. It does not matter a hill of beans how these people feel, or what they identify as. Reality always trumps meality.

But we live in an age of unreason, fantasy and delusion. All over the West people are living on feelings and identifying solely with meality. Now we have white folks who claim they are blacks or Indians; adults claiming they are really children; males identifying as females, and vice versa. There is no end to the madness.

Not too long ago when people claimed to be something or someone they clearly were not, they were locked up for their own good – and to protect the rest of society. And we had clear terminology for such disorders. As I wrote in an earlier piece:

We need to look at some standard medical terminology. Let me offer a few terms we don’t seem to use very much anymore but which are incredibly germane to all things in the trans revolution. Here are a few online definitions of some key terms:

-Psychosis = noun: a severe mental disorder in which thought and emotions are so impaired that contact is lost with external reality.
-Delusional = adjective: characterized by or holding idiosyncratic beliefs or impressions that are contradicted by reality or rational argument, typically as a symptom of mental disorder.
-Delusional disorder = Previously called paranoid disorder, is a type of serious mental illness called a “psychosis” in which a person cannot tell what is real from what is imagined.
-Delusion = noun: A delusion is a belief that is held with strong conviction despite superior evidence to the contrary.
-Deranged = adjective: mad; insane. “A deranged gunman”.
-Deranged = Deranged may refer to psychosis, a generic psychiatric term for a mental state often described as involving a “loss of contact with reality”.
billmuehlenberg.com/2017/07/23/trans-activism-state-mandated-mass-psychosis/

Yep, all these things involved losing one’s grip on reality. They were seen as cases of psychological or mental disorder. And up until recently we recognised that people suffering from such maladies deserved care, counsel, treatment and help. But they did NOT deserve praise, endorsement, promotion and approval.

Now we have the media, universities, politicians and leaders all jumping on the meality bandwagon. Leading the way of course is the militant trans agenda. People suffering from gender dysphoria need our help. They need treatment. But they do not need to be affirmed in their delusions.

Thankfully we see some signs of things turning around. Various news items have hinted at some big changes coming from the White House. Says one report:

President Donald Trump’s Justice Department will soon decide if agencies must follow biology when they document the legal sex of American women and girls, men and boys, according to a document leaked to the New York Times. The policy would protect Americans’ civil rights from the transgender ideology which insists that everyone has an FBI-enforced federal right to switch their legal sex — regardless of their biology — when entering sports competitions, K-12 bathrooms, hospitals, gym showers, the military, or single-sex civic society groups.
www.longroom.com/discussion/1222535/feds-draft-plan-to-discard-obama-s-transgender-ideology

If so, this would be welcome news indeed. And already some are endorsing any such move:

“It is high time that governmental agencies at the national and local levels return to valid science which reveals that there are two biologic sexes, and only two: male and female,” said Dr. Quentin Van Meter, president of the American College of Pediatricians.

Time will tell if this pans out or not. But it will be a much needed turnaround indeed. The amount of damage being caused by all this is steadily mounting up, with children being the biggest losers here. Adults suffer as well. As I said in my piece yesterday on these matters:

If a guy identifies as a falcon, climbs a tall tree, starts flapping his arms, and jumps off, guess what? The law of gravity will prove his delusions wrong every time. He will end up on the ground dead or severely injured. It does not matter at all how he feels or what he identifies as.

To which one person on the social media quipped:

Oh Bill, that old “law” of gravity chestnut. Don’t you think it is a bit old fashioned? You’re just a dinosaur claiming your old laws apply now. That is just plain HATE speech and when your old generation is gone, we’ll finally be free of such archaic “laws”.

We have two choices here: we either run with reality, or with meality. But you can’t have both at the same time.

11 Replies to “Time To Ditch Bigoted and Hateful Reality”