The war on biology, on reality and on our children continues unabated as the trans militants keep pushing their nefarious agenda. One of the most recent outrages comes from Tasmania. Labor and the Greens there want to remove sex from all birth certificates. As one report states:

Tasmania is on the verge of abolishing gender from birth certificates so transgender people don’t have to ‘out themselves’ when they apply for jobs. A vote is expected in Tasmania’s lower house next month. Christian groups and feminists fear the bill has been ‘hijacked’ by the transgender lobby through a series of Labor and Greens amendments. Both Labor and the Greens amendments want to remove gender from birth certificates.
www.dailymail.co.uk/news/article-6307687/The-Australian-state-verge-vote-abolishing-gender-birth-certificates.html?fbclid=IwAR1f4M6WmLLzTL56-0FXYMqJzENDSbbc1j9yOoFy2cPa9yMrMbVG05cL2WU 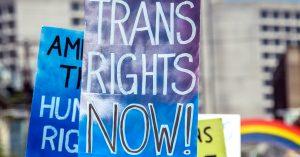 But as the militant trans activists get ever more outrageous in their demands, we are thankfully starting to see a pushback. One example of a rejection of all this has to do with those directly involved. Detransitioning is now a real growth industry, with more and more folks disillusioned with their sex change, filled with regret, seeking to undo the damage.

Five years ago, Professor Miroslav Djordjevic, the world-leading genital reconstructive surgeon, received a patient at his Belgrade clinic. It was a transgender patient who had surgery at a different clinic to remove male genitalia – and had since changed their mind.

That was the first time Djordjevic had ever been contacted to perform a so-called “reversal” surgery. Over the next six months, another six people also approached him, similarly wanting to reverse their procedures. They came from countries all over the Western world, Britain included, united by an acute sense of regret. At present, Djordjevic has a further six prospective people in discussions with his clinic about reversals and two currently undergoing the process itself; reattaching the male genitalia is a complex procedure and takes several operations over the course of a year to fully complete, at a cost of some euros 18,000 (pounds 16,000).

Those wishing the reversal, Djordjevic says, have spoken to him about crippling levels of depression following their transition and in some cases even contemplated suicide. “It can be a real disaster to hear these stories,” says the 52-year-old. And yet, in the main part, they are not being heard.
nationalpost.com/news/world/the-new-taboo-more-people-regret-sex-change-and-want-to-detransition-surgeon-says?fbclid=IwAR0H-0U_Usa4e11eHIe1DF-s4xH9ZEK4zWgBjKIwF9qQ1YfBc6Qf2l4ObQ8

And even disgruntled UK academics are starting to say enough is enough. Over 50 of them wrote a public letter on this matter recently:

We represent a newly formed network of over 100 academics, most of whom are currently employed in UK universities. We are concerned, from a range of academic perspectives, about proposed governmental reforms to the Gender Recognition Act, and their interaction with the Equality Act….

We are also concerned about the suppression of proper academic analysis and discussion of the social phenomenon of transgenderism, and its multiple causes and effects. Members of our group have experienced campus protests, calls for dismissal in the press, harassment, foiled plots to bring about dismissal, no-platforming, and attempts to censor academic research and publications. Such attacks are out of line with the ordinary reception of critical ideas in the academy, where it is normally accepted that disagreement is reasonable and even productive.

Many of our universities have close links with trans advocacy organisations who provide “training” of academics and management, and who, it is reasonable to suppose, influence university policy through these links. Definitions used by these organisations of what counts as “transphobic” can be dangerously all-encompassing and go well beyond what a reasonable law would describe. They would not withstand academic analysis, and yet their effect is to curtail academic freedom and facilitate the censoring of academic work. We also worry about the effect of such definitions on the success rates of journal submissions and research grant applications from governmental bodies such as the AHRC and ESRC.

We maintain that it is not transphobic to investigate and analyse this area from a range of critical academic perspectives. We think this research is sorely needed, and urge the government to take the lead in protecting any such research from ideologically driven attack.
www.theguardian.com/society/2018/oct/16/academics-are-being-harassed-over-their-research-into-transgender-issues

As this madness continues to spin out of control, it is encouraging to see some folks starting to stand up against the trans steamroller. Indeed, I am surprised that this insanity has been allowed a free run for so long. When you push such utterly bizarre stuff, challenging biology and reality itself, surely something has to give.

All ten of these are worth looking at, but let me share just three of Michael Brown’s points:

The transgender revolution is unhealthy.
Trans advocates tell us that failure to diagnose and treat gender dysphoria will result in depression, suicide, or other forms of self-harm. And I’m sure that, in some cases, post-hormone and post-surgery, many individuals are more satisfied with their quality of life. Others would point to the high percentage of suicides after surgery, along with the substantial number of people who experience sex-change regret.

But there’s more to be concerned about. A recent headline on a gay website announced, “Hormone therapy linked to dangerous health issues in trans women.” Yes, “Researchers set out to examine heart and circulatory health in transgender people, and found that transgender women face a greater chance of strokes, heart attacks, and blood clots compared to their non-transgender counterparts.” And what about kids who are put on hormone blockers before puberty, then put on a life-long regimen of hormonal therapy? What will the ill effects be?

The transgender revolution is unnatural.
There are fundamental, undeniable differences between men and women, which is why there is an increasing pushback against biological males competing against biological females. Even among some feminists and lesbians, there is resistance to trans women being accepted as females. And it is for good reason. A biological male will never be a female.
askdrbrown.org/library/7-reasons-why-transgender-revolution-will-fail

The world of sports will ultimately revolt against males competing with females.
As Kimberly Ross opined in the Washington Examiner, “There’s nothing more anti-female than letting biological men compete in women’s sports.” Earlier this month, “Canadian Rachel McKinnon won gold in the sprint portion of the UCI Masters Track Cycling World Championship in the women’s 35-39 age bracket. Placing first in any sport, especially at the international level, is quite an achievement. But McKinnon, a philosophy professor and transgender athlete who competed against only women, is a biological male.”

In response to this victory, the third place winner, Jennifer Wagner, said, “It’s definitely NOT fair.” For good reason Katie Hopkins tweeted, “For clarity – this was the WOMENS world championships. “I repeat. Women’s. Congratulations to the brave faces of silver & bronze. The world is gripped by a febrile madness.”
stream.org/3-more-reasons-why-the-transgender-revolution-will-fail/?fbclid=IwAR3AsmrKSE4Of5l36QRhA4uswS4V079_y1JjRAxSj1lEGzN2wRARxrvh9oU

At the end of the day reality will always trump radical ideologies and agendas. No society can last long if the bulk of its citizens prefer delusion and fantasy over truth and reality. The real world will always win when it is run up against. That is just the way things are.

If a guy identifies as a falcon, climbs a tall tree, starts flapping his arms, and jumps off, guess what? The law of gravity will prove his delusions wrong every time. He will end up on the ground dead or severely injured. It does not matter at all how he feels or what he identifies as. His mental problems will not make reality go away.

So as bad as all this nonsense is getting, thankfully we have the real world on our side. Reality wins and bogus militant agendas will always flounder. But how many more lives have to be seriously messed up and destroyed before the pushback sufficiently stops all this insanity?

12 Replies to “Fighting Back Against Trans Insanity”