Robert Spencer is a leading authority on Islam and the challenges and risks it poses to the free West – and the rest of the world. He has written numerous important volumes on Islam, creeping sharia, and Muslim terrorism. In his newest book he offers us a panoramic view of 14 centuries of Islamic bloodshed and killing. As he says in the introduction to his book:

There is no period since the beginning of Islam that was characterized by large-scale peaceful coexistence between Muslims and non-Muslims. There was no time when mainstream and dominant Islamic authorities taught the equality of non-Muslims with Muslims, or the obsolescence of jihad warfare. There was no Era of Good Feeling, no Golden Age of Tolerance, no Paradise of Proto-Multiculturalism. There has always been, with virtually no interruption, jihad. 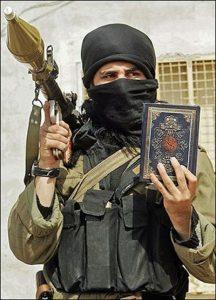 Strong claims. But Spencer spends 400 pages documenting this in great detail. And all this is due to the life and teachings of Muhammad as recorded in the Qur’an, the hadiths, and the sira. Indeed, both of the major schools of Islam, Sunni and Shi’ite, fully affirm the need to kill the infidel if they refuse to convert or be subjugated.

Islamic terror goes back to day one of Islam. As Muhammad said on his deathbed: “I have been made victorious with terror.” Spencer remarks, “It was a fitting summation of his entire public career.” Thus the first chapter of this vital book looks carefully at the role jihad played in the life of Islam’s founder. It is not a pretty read.

And since Muhammad is regarded as the perfect example for all Muslims to follow, his bloodthirsty ways were carefully emulated by his devout adherents ever since. Spreading the faith by the edge of the sword was forever to be standard Muslim practice.

Thus by the end of the seventh century, just decades after Muhammad’s death, authoritarian Muslim control extended from North Africa to Central Asia. And the spread of Islam continued apace over the next few centuries. The conquest of Spain and India followed, and the body count continued to mount up.

So too did slavery, destruction, bloodshed and dhimmitude. The gory details of ruthless Islamic oppression in these and other regions are carefully related by Spencer, usually relying on accounts written during the time. And the many stories of the enslavement and persecution and pogroms against Christians and Jews make up a big part of all this.

While the phrase ‘streets running with rivers of blood’ may involve some poetic license, more than once we read of this being the outcome of Islamic slaughter and carnage. For example, Spencer cites historian Steven Runciman regarding the fall of Constantinople in May of 1453:

The Muslims “slew everyone that they met in the streets, men, women, and children without discrimination. The blood ran in rivers down the steep streets from the heights of Petra toward the Golden Horn. But soon the lust for slaughter was assuaged. The soldiers realized that captives and precious objects would bring them greater profit.”

Or consider one contemporary Muslim account of the jihad against Hindus in India in the 14th century. Some 100,000 men had taken refuge on an island along with their families. The Muslims transformed “the island into a basin of blood by the massacre of the unbelievers…. Women with babies and pregnant ladies were haltered, manacled, fettered and enchained, and pressed as slaves into service at the house of every soldier.”

The Islamic warlord Tamerlane, who actually penned an autobiography, spoke of his dilemma as to what to do with a large horde of Hindu prisoners. He went with an easy option, saying this: “One hundred thousand infidels, impious idolaters, were on that day slain.”

Moving to more recent times, consider the treatment of the Christian Armenians. Late in 1894 a massacre lasting 24 days wiped out 25 villages. People were burned alive, and pregnant women were ripped open and their babies torn to pieces.

But much worse was to come. The Armenian genocide, beginning in 1915, resulted in the death of around one and a half million Armenians, 700,000 Greeks, and 275,000 Assyrians. Says Spencer: “Christian communities that had existed since the beginning of Christianity were wiped out. Constantinople, fifty percent Christian even in 1914, is today 99.99 percent Muslim…. Adolf Hitler was impressed with the brutal efficiency of how the Turks answered their ‘Armenian question’.”

He also looks at the Islamic war against Israel. He recounts how the Soviet KGB invented the fiction of the Palestinian people (there long had been a region known by the name of Palestine, but never a people or an ethnicity). The Soviets also helped to form the PLO and carefully mentored Arafat to do their bidding.

Spencer quotes a PLO leader who said in 1977, “The Palestinian people does not exist. The creation of a Palestinian state was only a means for continuing our struggle against the state of Israel for our Arab unity.” He also discusses the formation of Hamas in 1988 and its determination to wipe Israel off the map.

He brings things right up to date, looking at Al-Qaeda, the Islamic State, and September 11. And he reminds us how harmful policies of appeasement and Islamophilia have been in the West. For example, the Catholic church which was once on “the forefront of resistance to the jihad for centuries” has begun to cave, especially under the current Pope, who has become an avid defender of Islam and the Qur’an.

And of course leaders like Obama were committed to being apologists for Islam, seeking to advance their cause at home and abroad. Thankfully today much of this is being turned around. As Spencer reminds us, “at its height, the Islamic State controlled a territory larger than Great Britain… [But] within a year of the beginning of the Trump presidency, the Islamic State had lost ninety-eight percent of its territory.”

All up this book makes for sickening and gruesome reading. Here we have example after example of 1400 years of bloodshed, murder, rape, pillaging, enslavement and terror – all proudly and decidedly done in the name of Islam. The simple truth is this: the history of Islam is the history of jihad.

When Muslim jihadists screaming “Allahu Akbar” mow down innocent men, women and children on the streets and sidewalks of Nice or London, or stab them to death in Brussels or Melbourne, they are simply doing what Islam has always done. Their acts of terrorism are simply a continuation of what Muhammad began, and what has always been the MO of the political ideology known as Islam.

We all owe Robert Spencer a debt of gratitude for bringing together in one volume this stomach-turning but necessary story of what Islam really is all about. Just as there were countless “useful idiots” who promoted and made excuses for godless, totalitarian communism, so too there are also plenty of apologists for, and clueless defenders of, the deadly political ideology of Islam.

Hopefully this book will help to change that to some extent.

27 Replies to “A Review of The History of Jihad. By Robert Spencer.”