While most elections are important, the November 24 Victorian state election is really a key election indeed. We have had so many destructive policies under the Andrews’ Labor government already, and if they get back in things will become catastrophic. It frightens me no end just thinking of how bad things will get if they are returned to office.

I have written numerous articles on the Andrews’ Labor government and just how toxic it is to everything so many of us hold near and dear: faith, family and freedom. Or, as I heard Mark Latham over the weekend put it concerning the nation: country, culture and civilisation. 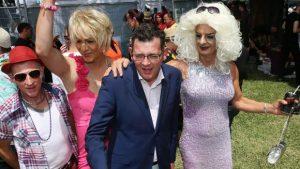 The list of their leftist activism is long and dark indeed. This article would be far too lengthy if I started listing all of Andrews’ many diabolical transgressions. Let me just bullet point a few of the more glaring examples:
-pushing hardcore policies of death, from abortion to euthanasia
-running with all things homosexual and transgender
-promoting the despicable “Safe Schools” programs and other education activism, targeting our vulnerable children
-forcing Christian organisations to employ staff who do not share their beliefs
-pushing failed “safe” injecting rooms
-seeking to ban Christmas carols
billmuehlenberg.com/2015/11/27/victoria-anti-god-and-anti-life/
billmuehlenberg.com/2017/08/11/victorias-war-parents-morality-family/

One can offer other worrying items, such as:
-his soft on crime approach
-his inability or unwillingness to tackle east African crime gangs
-his lack of resolve in dealing with Islamic terrorism
-his war against the Country Fire Authority
-his unhealthy coddling up to the unions
-his wasting of billions of dollars by cancelling needed infrastructure works, especially the much needed east-west link
-his numerous scandals, including the rorts-for-votes debacle

I could spend quite some time on this list. Consider the issue of Islamic terrorism. Just over a week ago we had yet more blood on the streets of Melbourne. This is now becoming routine in Melbourne sadly. The immigrant jihadist who went on a rampage was actually out on bail at the time, something Andrews tried to hush up.

Of course this is the same Premier who told us three years ago: “All of us, as Victorians and indeed Australians, have to accept that violent extremism is part of a contemporary Australia.”
www.theage.com.au/national/victoria/terror-threat-premier-daniel-andrews-under-fire-for-waving-a-white-flag-on-violent-extremism-20151017-gkbiu6.html

Um, no, I don’t accept it, nor do most Victorians. And call it what it is: Islamic violence. But aside from all his political blundering and numerous scandals, his commitment to radical hyper-leftist ideology is destroying this state. No wonder I called him Australia’s leading cultural Marxist:
billmuehlenberg.com/2016/10/25/australias-leading-cultural-marxist/

All these issues will simply continue and get much worse if Andrews is re-elected. The anti-child “Safe Schools” programs will get massively worse, and I guarantee that they will soon be mandated in all primary schools as well, and independent and Christian schools will also be fully forced to run with them.

For over 3 years I have spoken about the wretched “Safe Schools” programs and written over 45 articles on the matter. Others have also sounded the alarm. Yet most folks still don’t know or care. If this short video does not shake you out of your lethargy, nothing will: www.youtube.com/watch?v=wYpb1REPjt4&feature=youtu.be

If everyone reading this watched and shared this video, the diabolical Labor government would be easily tossed out at Saturday’s election. And maybe some folks would be jailed as well. Please watch it and please share it. Your children and grandchildren are depending on you.

If things are not bad enough already, we also keep hearing talk of Labor and the Greens getting into bed to push their radical agendas even further. Consider just one shocking news item on this:

The Greens are eyeing off a ministry in a Labor minority government if it can secure the balance of power at next week’s Victorian election, despite Premier Daniel Andrews ruling out making a deal with the party. Victorian Greens leader Samantha Ratnam told the ABC in a wide-ranging interview that “all options” are on the table in the event of a hung parliament. “We want to form progressive government and we are happy to sit down at the table with Labor and try and form the most progressive government this state has seen,” Dr Ratnam said.
www.abc.net.au/news/2018-11-18/greens-eye-off-minority-government-in-victoria/10507796?pfmredir=sm&fbclid=IwAR0Kqlq5nwxOi-MdnAsPJItXtgy7mBWUF55dt8ZGD4dNS21lb__Pe7Tq-sQ

To say all this is not to claim that the other main alternative is a panacea. The Liberals are a mixed bag sadly. Yes, any major party other than Labor and the Greens would be welcome. And some good promises have been made, including ending the “Safe Schools” programs and reintroducing things like religious education.

But Matthew Guy has been weak on things like homosexuality and homosexual marriage. Consider just one recent media item on this. I realise that the Melbourne Age is generally just about fake news, but if this report is even half true, it is a real worry indeed:

The state Coalition has promised if elected a raft of LGBTI services including a dedicated tourism strategy. It would also carry out a parliamentary inquiry into gaps in public services for the LGBTI community in outer suburban Melbourne and regional Victoria.

It promised to establish Victoria’s first LGBTI business roundtable to be chaired by the premier, provide $500,000 in funding to support Joy FM in becoming one of the first tenants in the Victorian Pride Centre to be built in St Kilda, as well as $50,000 annually to digitise archives and “preserve the history and role of LGBTI Victorians”. A further $2 million will be spent to develop the new LGBTI tourism strategy, including international marketing campaigns and LGBTI business tourism awards.
www.theage.com.au/politics/victoria/millions-for-lgbti-tourism-but-no-mention-of-safe-schools-20181118-p50gtn.html?fbclid=IwAR0RjnxCDl7QlxFU6GTjSps0Xb3zI5HFTgWl6gsKcGnT_rvn74kx2mLaZTw

Good grief. I thought the Liberal party was supposed to be the conservatives party, not just a lighter shade of Labor – not just a lighter shade of pink. And while some in the party – such as the staunchly pro-life Bernie Finn for example – will certainly want to roll back, as much as possible, the culture of death in Victoria, it is a moot point if Guy will have any desire to actually move in this direction.

So the liberals will not bring us heaven on earth. But they will be light years ahead of the most radical, leftist, coercive utopian party in the country. It is clearly time for Labor to go and to bring in some fresh blood with some new ideas. Please vote wisely on Saturday.

And vote prayerfully and carefully as well. To that end some of us have put together the Victorian Christian Values Checklist. It looks at five main parties, and rates them on 21 different issues. Please have a look at this, and share it around, far and wide: www.christianvalues.org.au/index.php/checklists/current-elections

14 Replies to “The Victorian State Election”