OK, I admit it: my title is actually somewhat inaccurate. You see, it depends on what one means by the word “faith”. If we use the term in a more general sense of having a commitment, or a mental adherence, or a loyalty to something or someone, then basically everyone has faith.

The atheist, the secular humanist, the conservative, the leftist, the Hindu, the New Ager and the Christian all have faith, so one can argue that we live in an overwhelmingly faith-based culture. Basically, everyone has something they strongly align themselves with or put their hope in.

But I have used the word here in a much narrower sense – in a religious sense. And even there I primarily have the Christian faith in mind, although the Judeo-Christian worldview is also broadly in my sights. If we speak about our culture being anti-Christian, then my title is spot on.

We live in not just a post-Christian culture but an anti-Christian one. All over the West it seems that Christianity – at least the biblical version – is under attack and often in retreat. The attacks on the faith have been relentless over the past century or so. I have documented numerous cases of this on this site, and will continue to do so. 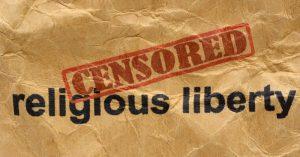 But despite all the various recent moves and claims by secular humanists, the new atheists, and others, the overwhelming majority of mankind both now and throughout history has been religious. Human beings are essentially religious creatures, and the desire to transcend the physical world is an ever-present longing.

Thus the freedom to worship and follow one’s religious convictions is a vital part of any modern democratic society. The mark of a truly democratic and free society is the way in which it allows for such religious freedom. While there are limits here – as with everything – generally speaking, religious freedom is an important and basic human right.

But throughout the West we are witnessing a war on religion. Religious freedom in many areas seems to be shrinking, not expanding. Secular humanism and leftism are a big part of this. They are increasingly turning religious folks – primarily Christians – into second class citizens.

We are seeing more and more restrictions on religious freedom and expression, and much of this is done under the guise of “hate crimes,” “hate speech” and the like. Often to simply stand up for one’s religious convictions will be deemed to be hateful, bigoted and intolerant.

Thus we find an ever-escalating war on so many forms of religious practice and expression, in particular on things like Christian teachers, pastors, bakers, florists, photographers, educators, and so on. Often the assault on these religious freedoms are coming from radical sexual activists who not only are pushing their agenda on the rest of society, but want all who differ to be silenced.

The recent homosexual marriage debate in Australia is a clear case in point. Often the attempts of believers to express their thoughts on this matter in the public arena were shut down, or at least attempts were made to keep their voices from being heard.

Venues were often denied such persons, public meetings were often mobbed by activists who wanted them gone, and various forums for public expression were closed to many. Much worse was when various outspoken Christians were actually taken to court by the militants.

Consider just one case – of many: back in 2015 a transgender Greens political candidate dragged Archbishop of Hobart Julian Porteus before the Anti-Discrimination Commission because the Catholic Church dared to publish and distribute a booklet saying marriage is between a man and a woman. I discussed that case in an article at the time: billmuehlenberg.com/2015/11/13/the-greens-war-on-christianity/

When the heavy hand of the law is dragged in by the activists to silence those of a religious persuasion who happen to have a different view on things, you know we are in a really bad way. Bullying, intimidation and ugly anti-Christian bigotry is sadly now becoming the norm.

A brand-new piece by retired Scottish Presbyterian minister Dr Campbell Campbell-Jack is worth looking at here in this regard. The title is most revealing: “Progressives are the 21st century pagans”. Secular left activists are certainly dragging the Christian West back into paganism.

He writes: “Progressives would mostly deny it but they are today’s pagans. Today’s culture war against Christianity marks the return of a pagan religious conception and worldview.” This new paganism is really just a repeat of the old paganism. What the early Christians had to deal with 2000 years ago is happening once again, and we are simply seeing history repeat itself. He writes:

Today’s ‘tolerant’ progressives cannot tolerate the existence of Christianity for the same reason their pagan predecessors couldn’t tolerate Christianity in the Roman Empire. What made Christians so threatening to the pagan Romans? Christians tended to live law-abiding, peaceful lives, intent on raising their families and getting on with their work. They were honest, sober citizens who were prepared to submit to the authority of non-Christian rulers. Yet they met with sometimes deadly hostility.

The pagans saw that Christians in the Roman Empire were, as we are today, radicals. Their willingness to comply with the law came to an abrupt end when it came to accepting pagan deities. Pagans were flexible about incorporating newly encountered gods and mythologies into one multi-cultural mosaic. However, when it came to theology and morals Christians were unyielding. They insisted on the exclusive divine sovereignty of their own God. Christian morality seemed bizarrely demanding to the free-wheeling, anything-goes Romans, but the Christians insisted on biblical standards.
www.conservativewoman.co.uk/progressives-are-the-21st-century-pagans/

We now have a major war going on against faith, and so very much is at stake, just as it was at the very beginning of the Christian church. Now more than ever we must contend for religious freedom. Of course to offer such concerns and make such calls is not to suggest that all religions and religious beliefs are the same or share some sort of moral equivalence.

Some religions, or at least aspects of them, can in fact be incompatible with freedom, pluralism and democracy. For example, religious practices such as honour-killings or polygamy obviously run counter to the values of Western democracies and thus must be countered.

But generally speaking the free society extends as much latitude as possible to various religious traditions and customs. Yes, the balancing act can be difficult to achieve, but it is vital that we try. And none of this has to do with some vague separation of church and state. I have dealt with the faulty views on that elsewhere, eg: billmuehlenberg.com/2006/10/20/separation-of-church-and-state/

This discussion is about the right of religious individuals to freely share their values and points of view in public. Indeed, it can be argued that everyone is religious in a sense, with some overarching set of values and commitments. The US Supreme Court even once ruled that secular humanism is a type of religion.

And with the great majority of Australians still claiming to be religious, a genuine democracy will give them as much freedom to speak and worship as it will to those with no clear religious beliefs. The attempt to shut down religious discussion and crack down on religious practices and values is very worrying indeed.

There are many of us who will continue to fight for the right of religious freedom. As mentioned, there can be some limitations here, but the general principle of freedom of religious speech, conscience and worship must be upheld and fought for. The old saying certainly applies here: ‘the price of liberty is eternal vigilance.’

When forces are at work to curtail religious freedom, then we must resolve to stand strongly for the right of religious people to coexist in society, even in an increasingly secular society. As with free speech in general, freedom of religion means that some people might be offended by what another person says or does.

But that is how a democracy seeks to function. Banning everything that offends – in this case, religious beliefs and concerns – is not how we save a democracy but how we destroy it. As George Orwell once put it, “If liberty means anything at all, it means the right to tell people what they do not want to hear.”

If certain people are offended when a Christian or a Jew for example publicly defends their faith tradition on things like marriage and family, they have to learn to live with it. Seeking to shut down and censoring such speech and beliefs puts us on the road to the end of democracy and freedom.

I for one will continue to stand and fight against this new paganism and its wars against faith. Who will join me?

10 Replies to “Defending Faith in an Anti-Faith Age”