Canadian psychologist, media sensation, and conservative intellectual Jordan Peterson is in Australia at the moment. He has already spoken to a number of sold-out audiences around the country, and tonight he takes on what may be his greatest challenge yet. 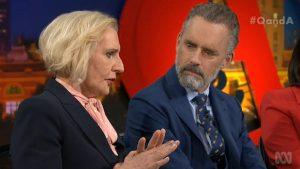 He will go into that diabolical lion’s den known as Q&A, the weekly ABC torture chamber of leftist demagoguery, bigotry, and conservative/Christian bashing. I have documented plenty of cases of just how awful this show is – all paid for by our tax dollars.

Most of us now refuse to watch this despicable program but having Peterson on changes everything. The author of the best-selling 12 Rules For Life has demolished many a progressive media personality and leftist academic. So let me speak to all this before and after the show goes on.

We already know what a hatchet job and stacked deck this will be. As well as facing mostly hostile leftist opponents on the panel, including the leftist host and a leftist audience, he has yet another hurdle to climb: he has to take on a trans guy put on the show to try to make life miserable for Peterson: Catherine McGregor.

Talk about a set-up. Talk about a cheap trap. Peterson is of course well-known for not bowing to the trans madness. So this is as predictable as it is appalling. And Peterson was well aware of this before the show even started. As he said in The Australian:

“It’s so predictable. It was a set-up, an attempted set-up. It’s another reason why mainstream media is failing, and why people are turning to YouTube and other channels.” But the ABC always stacks the deck while pretending to be “balanced”. It has NEVER had a genuinely balanced program, and even a remotely balanced show is an utter rarity.

The lamestream media ALWAYS operates this way, whatever the issue. They will pit a talking head against a personal, emotive sob story. I had to do this countless times when I was a regular on the media. I – a talking head – would be pitted against one or more real life stories – be it some emotional homosexual giving us a sob story, or a single mum, or woman who had an abortion, etc.

In a medium such as television such contests are always unfair and unbalanced: a personal sob story – especially with some ‘oppression’ and victim status to run with – will always trump some guy voicing facts, statistics, and evidence based on reasonable commentary.

Or a woman who had abortions with no regrets versus a woman who has had abortions and does regret them and still grieves. That would be fair. But guess what? The leftwing media in general and the ABC in particular NEVER play fair. They do NOT believe in fairness.

And one more point: notice how the ABC website pejoratively labels Peterson: “Controversial Canadian Psychologist and Author”. Um, just why is he “controversial” while the radical leftist and feminist Van Badham is simply called a “Writer and commentator”? And Catherine McGregor is simply a “Freelance writer, broadcaster and author”?! I would have thought that as a trans activist he is especially controversial.

While awaiting tonight’s show, let me close this section by quoting from my good friend and fellow Christian culture warrior Warwick Marsh and his new article, “Seven reasons why I like Jordan Peterson.” He writes:

Well whatever the mainstream media establishment think about Jordan Peterson I like him.

1. He has humility and integrity and promotes integrous living. The fact that Jordan Peterson closed his Patreon account at his own cost because of their duplicity towards Sargon of Akkad, a fellow Youtuber, says it all. Albert Einstein said, “Try not to become men of success but men of value”. Jordan would echo to this, “What you aim at determines what you see”.
2. Jordan believes in personal responsibility: make your bed before you change the world. Jesus said, “Pull the log out of your own eye before you try to pull the speck out of your brother’s.”
3. Dr Peterson is taking a stand for truth as foundational and inarguable, and won’t back down. George Orwell said, “In a time of universal deceit telling the truth is a revolutionary act.”
4. I believe Jordan Peterson is truly compassionate towards people. He has helped a lot of people take charge of their lives and that is his goal.
5. Dr Peterson has taken a stand against political correctness and cultural Marxism. Jacques Barzun said, “Political correctness does not legislate tolerance; it only organizes hatred.”
6. Jordan is a family man. He supports mothers and fathers and is a great advocate for children. He is also passionate to turn the tide of fatherlessness. Andy Mineo said, “I think in today’s society we are dealing with an epidemic of fatherless homes.”
7. Dr Peterson supports the Judeo-Christian value system that is the underpinning of western civilization. He does not run from topics such as the reality of ‘Good and Evil’. Sydney Smith said, “It is the calling of great men, not so much to preach new truths, as to rescue from oblivion those old truths which it is our wisdom to remember and our weakness to forget.”
blog.canberradeclaration.org.au/2019/02/22/seven-reasons-why-i-like-jordan-peterson/

OK, the show has just finished, and as expected we had the obvious taking place:

-Jones and most of the others were giving us all the usual leftwing baloney.
-Peterson handled himself superbly, as always.
-The gender bender debate became a big part of the evening.

But let me look at a few details of the show. Simply having McGregor sitting right next to Peterson was bad enough of course. The trans debate certainly did arise, and Peterson was once again falsely stereotyped as to what he believes on the whole trans issue, including by a young lefty in the audience.

And one of the more bizarre things heard during the night was when McGregor said he was ‘a bloke seven years ago’. Um, he still is a bloke. He at times tried to paint himself as a victim here, although as one with some latent conservative tendencies he did not go too ballistic on the matter.

Peterson had plenty of loony leftism thrown at him – from panellists and audience members alike – and he did a superb job of dealing with it. At one point the brainless Terri Butler said the notion of “toxic masculinity” was just a straw man. Peterson quickly and soundly put her and that nonsense in its place.

And then Butler insulted Peterson, to which he quickly challenged her. She and the other lefties there were basically just smug and smart-arse hacks who had no arguments but preferred sneering and condescending remarks. They showed their true colours, once again.

And of interest they even had Milo Yiannopoulos linked in with a video comment, mainly being quite critical of Peterson. He also dealt with that quite well. Peterson managed to get in a few of his core themes, including the curse of identity politics and the importance of personal responsibility.

Religion arose, and McGregor claimed to be a Christian, and worse yet, Badham waxed eloquent about being a full-on Marxist and a full-on Christian! Butler said she is an agnostic while Hawke said he is a Christian. Peterson admitted he was not in fact comfortable with the question, but intimated that he believes in a God to some extent: “I act as if God exists.”

In sum, please pray for Jordan Peterson. As to his public wars, he has to take this abuse, bigotry and hatred on a regular basis. Tonight’s Q&A was just another example of this. He needs prayer cover as he stands up for so many important values and beliefs that the left routinely hammer.

And as mentioned, he is not a Christian, although he likely has more Christian values, principles and instincts than many Christians do. So pray for his salvation please. It would be wonderful to see him coming into a saving relationship with Jesus Christ.

But as another fellow and I agreed on while I was in NSW over the weekend, he may even be of more use to the culture wars at least if he remains a non-believer. But for his sake let’s pray he turns to Christ soon.

38 Replies to “Jordan Peterson To the Rescue”