Lock him up for life. And while we are at it, lock up most of the lamestream media who ran with this story – they bought it hook, line and sinker, and did not question anything. Shame on them. They are complicit in this crime. They should stop pretending they are journalists.

I refer of course to Jussie Smollett and the MSM who put him on a pedestal. He was arrested on Thursday after all the evidence became overwhelming: he faked the whole thing. He has been released on a $100,000 bond, but incredibly, even though the gig is up, he is still claiming he is innocent. 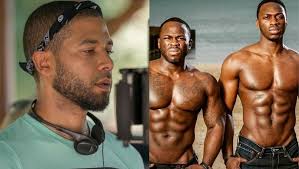 Anyone with a brain and not a leftist journalist – but I repeat myself – knew this was bogus. Plenty of folks suspected his bizarre story about being bashed and lynched from day one. It was just as fake as leftist journalism. And sure enough, the whole thing has imploded on him big time – and on most of the MSM which fully colluded with him in this.

According to the police it turns out he staged this entire elaborate hoax because he wanted more money! Um, he makes $125,000 an episode of Empire. He does not need more money, but he does need some psychological and mental help – big time. And a good dose of jail time.

He is crying out for attention while also pushing extreme identity politics. Thankfully there is a lot of backlash to this guy and his lies and hypocrisy. The Black Chicago Judge John Fitzgerald Lyke said that all this was “utterly outrageous” and “despicable”.

And Chicago Police Superintendent Eddie Johnson said this: “Why would anyone, especially an African-American man, use the symbolism of a noose to make false accusations? How could someone look at the hatred and suffering associated with that symbol and see an opportunity to manipulate that symbol to further his own public profile?”

He wanted to be a hero – and how greater to be a hero than to have white, homophobic Trump supporters rough up a black homosexual? And complete with a noose, bleach and a MAGA hat! Hmm, pity he did such a lousy job of staging all this, complete with rehearsals and paying his buddies to rough him up – but not too much!

I just wrote a piece on identity politics, and this one sure takes the cake. This is a classic case of IP and one of the most recent and blatant. See here for my earlier piece: billmuehlenberg.com/2019/02/21/the-left-and-identity-politics/

And Muslims, homosexuals, Blacks and others have been staging fake hate crimes for years now. These hoaxes are becoming a daily affair. And with Trump in office they seem to be escalating. They have become normalised, and they are part and parcel of the toxic Trump-hating culture of the left.

It is an ideological war, and Trump and Trump supporters have become the perfect target to run with all these hoaxes and fabrications. Jayme Metzgar has just written on how these hoaxes are par for the course with leftist identity politics. Indeed, it has become a religion. She writes:

It’s through this lens that we should view the curious case of Jussie Smollett, who now appears to have faked a hate crime against himself, blaming it on faceless Trump supporters. We could also mention other recent viral “hate hoaxes”––the Covington Catholic debacle, the homophobic Whole Foods cake, and the too-readily-believed “racist restaurant patron” tales that plague the internet. These stories bear too many similarities to be seen simply as isolated attention-seeking.

Instead, this phenomenon has everything to do with a philosophy that has taken hold in the modern mind. Like Ananias and Sapphira before them, we should see these particular liars as early hypocrites in a new religion: the church of modern progressivism.

Progressives decry the “privilege” and “power” of some identity groups over others, but the reality is that they don’t seek to abolish class struggle, but rather to wield it. Progressivism keeps us locked in an endless conflict, fighting to kill or be killed.

This is why progressives are so eager to make their fellow Americans into racists and bigots. Virtue is a zero-sum game; you can only gain yours if someone else loses his. If there isn’t anyone willing to oblige you by donning a MAGA hat and putting a rope around your neck, you’ll have to find other ways of getting on the right side of History. Demonizing people on social media tends to be one of the easier routes.

Fifty-five years ago, a Christian pastor stood on the steps of the Lincoln Memorial and delivered an iconic speech with the cadence of a sermon and a text soaked in Scripture. He called on America to keep its promise of freedom for all citizens, regardless of color or creed. He spoke of freedom for the oppressed, and of repentance and redemption for the oppressor. He spoke of unity among “all God’s children: black men and white men, Jew and Gentile, Protestant and Catholic.” Rather than envisioning a never-ending, zero sum struggle, he proclaimed a dream of brotherhood.

Dr. Martin Luther King had experienced far more racism, violence, injustice, and hatred than Smollett is likely to see in a lifetime. Nonetheless, he remains a model of virtue for us not because he was a victim, but because he drew on the teaching of his faith to overcome hatred with love. Brotherhood that transcends identity is a Christian idea. It is an American idea. We must reclaim it, or perish.
thefederalist.com/2019/02/20/hate-hoaxes-happen-religion-identity-politics/?fbclid=IwAR049iX4NpOo1Y5BzP6bpGWs2A5d21v9nw-IvQOXCXqiTs2F7KF3vUe8SqY

This entire case is the perfect snapshot of the secular left. Lie, make things up, create bogus hate crimes, outrage and victim status, and get the mainstream to fully run with it, without any journalistic integrity or rigour. Indeed, the media has been utterly appalling, fully swallowing this hoax and pushing it everywhere.

No investigations, no doubts or healthy suspicions until everything is verified. Just full-on support and endorsement of this moonbeam story. There most certainly is a swamp in need of draining, and the first port of call is the leftist MSM. They are a joke.

And even as I write this up, the leftists in the lamestream media are not offering apologies or a mea culpa, but are doubling down and making excuses, still trying to blame Trump and the right for all this. Fake hate crimes reported by the fake media – this is what we now have in abundance. Heaven help us.