The Electoral College is admittedly something rather complex, confusing and obscure to many folks – even to many Americans. So just what is it and why is it a vital part of America’s history? Briefly, it is the method by which Presidents of the United States have been elected ever since 1789.

The Founding Fathers wanted to make sure that all states from all parts of the country had a fair say in what was happening concerning its elected leaders. It was first approved on September 6, 1787 at the Constitutional Convention. The US Constitution was ratified on June 21, 1788. Article 2, Section 1, Clause 2 of the Constitution in part lays out the system: 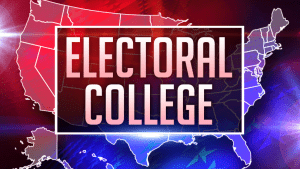 “Each State shall appoint, in such Manner as the Legislature thereof may direct, a Number of Electors, equal to the whole Number of Senators and Representatives to which the State may be entitled in the Congress: but no Senator or Representative, or Person holding an Office of Trust or Profit under the United States, shall be appointed an Elector.”

The Electoral College consists of 538 electors, so a majority of 270 electoral votes is needed to elect the President. Each state’s entitled allotment of electors equals the number of members in its Congressional delegation: one for each member in the House of Representatives plus two for its Senators.

All this was done to ensure that states with smaller populations would not be ignored or swamped by areas with large populations. America was never thought to be just a pure democracy. It was always conceived of as a republic. The Founding Fathers were quite clear on this. As professor Michael Bauman of Hillsdale College puts it:

The US is not now, nor ever has been, a one person/one vote nation. We are a republic, a confederation of states, not a democracy. In order to maintain some equity between the states, we assign two senators to each one, no matter its size or population. All states get two, regardless. We set things up in that way in order to give the states a voice. We are not a democracy; we are a confederation. The Electoral College is based upon that principle. We vote for presidents by states, not by mere popular vote. Were the presidential election conducted by mere popular vote, then candidates would spend all their time in big states and big cities, overlooking those that are small and that have fewer voters. Now they must attend to all states and must compete to win them. Two or four electoral votes can be the difference between winning or losing an election. Little states now have a voice and must be attended to. They might be small, but they can tip the balance.

But all this is now being questioned, mainly because the Democrats do not like the fact that they are not in the White House. Many of the lead candidates for the 2020 US Presidential election are saying we must dump the Electoral College. This includes Elizabeth Warren and Beto O’Rourke, as well as others such as Alexandria Ocasio-Cortez.

The Democrats are of course the party of illegal immigration, ‘tear down the walls,’ and give everyone the vote, including illegals. And they also want to lower the age to vote as well! So, if you have 22 million illegals in the US for example, most of course predisposed to the Democrats, having a popular vote would really help guarantee a Democrat-controlled White House.

The 2016 US election is a prime example of all this. Trump of course won the Electoral College vote, while Clinton won the popular vote. Unfair? Not really. As the former Secretary of Education Bill Bennett reminds us, outside of California, Trump won the popular vote in every other state – and California has a high amount of illegal immigrants.

Mark Levin reminds us that smaller states with smaller populations lose out big time without the Electoral College, and we would end up being ruled by a mobocracy – the bigwigs in New York or California, while so many others are just ignored.

Another commentator on the social media, Butch Crawford, offered this explanation:

For all the people who fell asleep in civics class…
1: There are 3,141 counties in the United States. Trump won 3,084 of them. Clinton won 57.
2: There are 62 counties in New York State. Trump won 46 of them. Clinton won 16.
3: Clinton won the popular vote by approx. 1.5 million votes.
4: In the 5 counties that encompass NYC, (Bronx, Brooklyn, Manhattan, Richmond & Queens) Clinton received well over 2 million more votes than Trump. (Clinton only won 4 of these counties; Trump won Richmond) Therefore these 5 counties alone, more than accounted for Clinton winning the popular vote of the entire country.
5: These 5 counties comprise 319 square miles. The United States is comprised of 3,797,000 square miles.
6: When you have a country that encompasses almost 4 million square miles of territory, it would be ludicrous to even suggest that the vote of those who inhabit a mere 319 square miles should dictate the outcome of a national election.
Large, densely populated Democrat cities (NYC, Chicago, LA, etc) don’t and shouldn’t speak for the rest of the country.
And this children, is WHY you have an Electoral College. It’s a safety net so that EVERYONE’S vote counts.

Let me cite some other experts on the importance of the Electoral College. First, Windsor Mann reminds us of a few basic truths:

If we eliminate the Electoral College, as Warren proposes, presidential candidates will start treating states like Iowa, New Hampshire and South Carolina the way the rest of America does — as states not worth visiting. Candidates will invest their time and money in states with the most people, the most money and the most political influence, such as California, New York and the areas surrounding the District of Columbia. This will make American politics more segregated, more centralized and more elitist, not less.
www.usatoday.com/story/opinion/2019/03/21/elizabeth-warren-wrong-electoral-college-necessary-democracy-majority-popular-column/3227484002/

So much for letting every voice be heard! And as Rich Lowry reminds us, each vote is in fact counted:

All votes are counted toward the outcome in every state. Voters from Republican, rural areas in California, for instance, aren’t disregarded; they are simply outnumbered. If it is the considered progressive view that this is tantamount to disenfranchisement, California could immediately mitigate the problem by splitting its electoral votes by congressional district the way Nebraska and Maine do. This would require no change to the U.S. Constitution, or elaborate schemes. Of course, California is loath to give up any of its solidly Democratic electoral votes.
www.politico.com/magazine/story/2019/03/20/elizabeth-warren-electoral-college-226044

The Founding Fathers had utter contempt for democracy. James Madison, in Federalist Paper No. 10, said that in a pure democracy, “there is nothing to check the inducements to sacrifice the weaker party or an obnoxious individual.” At the 1787 Constitutional Convention, Virginia Gov. Edmund Randolph said that “in tracing these evils to their origin, every man had found it in the turbulence and follies of democracy.”

John Adams wrote: “Remember democracy never lasts long. It soon wastes, exhausts, and murders itself. There never was a democracy yet, that did not commit suicide.” At the Constitutional Convention, Alexander Hamilton said: “We are now forming a republican government. Real liberty” is found not in “the extremes of democracy but in moderate governments. … If we incline too much to democracy, we shall soon shoot into a monarchy.”

The Founders saw our nation as being composed of sovereign states that voluntarily sought to join a union under the condition that each state admitted would be coequal with every other state. The Electoral College method of choosing the president and vice president guarantees that each state, whether large or small in area or population, has some voice in selecting the nation’s leaders.
www.dailysignal.com/2018/10/17/killing-the-electoral-college-would-alienate-half-the-country/?utm_source=facebook&utm_medium=social&utm_campaign=tds-fb&fbclid=IwAR0113e1faPICBXWEOna_DV91cchqBFrTgrPzjtGOOC3AwaxuRcGlSm3Qh4

“Pure democracy” is just another phrase for “mob rule.” Dictatorship of the majority means 51 percent of the citizenry rule the other 49 percent. That minority has no rights except those the condescending majority grants. It works well for those in the 51 percent, not so much for those in the 49. Plato knew it, and James Madison, who knew his Plato, did too. Plato and Madison both recognized that justice and liberty for the minority is possible only when power is shared between groups in society.

Inspired as it is, our Constitution protects the minority while preserving the best of democracy: we the people elect representatives to run the government (republic) and we do so by majority vote (democracy). Ergo, this is a democratic republic. Ergo, an Electoral College.

She offers a sporting analogy if some of you prefer to think about all this in such terms:

Think of the Electoral College like the World Series. One person-one vote equates to the World Series Champions being determined by total number of runs scored. If the Dodgers win the first game 10-0, and the Yankees win the next four games 1-0, the Dodgers win the series. Even though the Yankees bested the Dodgers in four games, it doesn’t matter because the Dodgers scored 10 runs to their 4. One anomalous game decides the whole series. Without the Electoral College, a few heavily populated states decide the whole election.
thefederalist.com/2016/09/16/the-electoral-college-still-makes-sense-because-were-not-a-democracy/?fbclid=IwAR2I6KCpUi4gTYmkCqdymBm2SaLVGyiCfNxZStITBhQJ9Ff5tDiqNFx7Gtk#.XJEzW90SpDU.facebook

It comes as no surprise that the Democrats have a very low view of the US Constitution and the American Federalist system. Their attempt to get rid of the Electoral College is just another example of this. While the Electoral College may not be perfect (nothing is in a fallen world), it has served America well, and those wanting to abolish it need to make a much stronger and better case to do so.

Let me conclude with some wise words from Lewis Morris: Leftists “cannot win in the arena of ideas, so they want to change the rules of the game. So far, they have been very clever about exploiting the so-called problems of the Electoral College. The first thing to remember is that there is no problem with the Electoral College. Except if you are a Democrat who can only win by pitting segments of the nation against one another.”
patriotpost.us/articles/61560-demo-controlled-states-plan-electoral-college-subversion?fbclid=IwAR233yYUSJAhvxl0Z6gpSsBUXKKsYDUEn1zVuwN7JAassCgV5OfiVSCCzP4