There is never a dull moment when you wake up each day and check out the morning news. When I looked at my news feed this morning it was filled with story after story about radical vegans causing mischief and mayhem all over Australia.

Out of nowhere it seems we now have an angry army of militant vegans who have become the latest outrage industry. It seems that they hate us meat-eaters and they ain’t gonna take it anymore. Consider just some of the recent headlines we are seeing about all this:

“Vegan vigilantes cause traffic chaos in Melbourne’s CBD and storm farms across Australia in co-ordinated events – as animal activists boast of the ‘largest protest the world has ever seen’.” 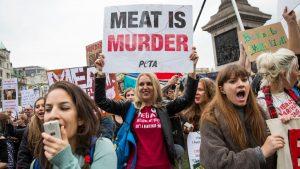 “Nine people arrested after allegedly chaining themselves to Goulburn abattoir.”

Some important questions arise here. First, where did all this come from? Up until recently no one heard a peep out of these guys, or even knew that they existed. Now they seem to be everywhere – or at least that is the impression they are trying to create.

Hmm, where have we seen this kind of thing before? We have many examples. One day no one was talking or even thinking about anything trans-related, the next day every other story in the world is about the trans revolution. One certainly has to ask questions about manufactured revolutions here. Who actually is behind all this, and who is funding all this?

Another question arises: there have always been vegetarians amongst us, before vegans were a thing. I was even one for a while, back in my hippy days. I thought that I could achieve some sort of spiritual enlightenment – as well as obtain some health benefits – by not eating meat.

But for those not in the know, let me offer a very brief contrast: vegetarians tend to eschew meat and fish, while the vegan goes further, refusing any food stuffs that come from animals. Thus eggs, milk, cheese, honey, along with any products such as wool or leather, are all rejected by vegans.

I guess you could say that back in my wild youth I was a pseudo vegan. I abstained from not just meat and fish, but avoided eggs, as a life was forfeited to enjoy such things. But I ate things like cheese and milk since no animal gave up its life in the process.

BTW, in case you are wondering, a religious conversion to a more orthodox faith brought an end to my year-and-a-half stint as a vegetarian. One of my first meals thereafter was a chicken dinner. But the point I am trying to make here is that I did not try to bully and intimidate everyone else into accepting my practices.

I did not seek to force others to give up meat. I did not even expect others to do so. This was my conviction at the time, and I was happy to tell others the reasons for my decision, but it never entered my mind that I had to compel others to embrace my lifestyle.

Indeed, I simply accommodated to my meat-eating surroundings. One quick example of this. Being a hippy and a vegetarian could be problematic at times. As any dope-smoker knows, you sure can get the munchies, so we would often run into a fast food place like Burger King (Australia’s Hungry Jacks). I would order a cheeseburger without the burger.

They charged me 17 cents for each one! I obviously became well known there as the staff started referring to it as a Muehlenberger. But I digress. As a hippy we were supposed to be into peace and love. So the idea that I could be militant about my vegetarianism was absurd.

I and others like me did our thing, and that was it. But no more it seems. Now we have activist groups seeking to force everyone else to embrace their ideology – or else. Hmm, isn’t this always how the radical left tends to act? My way or the highway.

It is not just that they have an alternative set of beliefs and practices, but they fully expect everyone else to completely embrace them. There is no room for compromise. There is not even any room for discussion and debate. We meaties WILL be made to conform, or the violence and intimidation will continue unabated.

And that is just what we are now witnessing. It is as if these people are offering us a new religion – a new sacred cause to become a part of. And that is exactly what they are doing. Many years ago I wrote some articles about how radical environmentalism is becoming a new religious movement.

As the West gets more and more secular, people are left with a vacuum, both in society and in their own lives. They still want something to live for, something to commit themselves to, a cause they can really believe in. They want some grand metanarrative to attach themselves to and become a disciple of.

So if it is not the God of the Bible that they bow down to, they simply create their own gods and bow down to them. They make up their own religion and serve it with as much zeal as any other true believer does. As I wrote in one of these articles I penned over two decades ago:

Robert Nisbet once remarked that environmentalism has become the third great redemptive movement in human history, following Christianity and Marxism. Indeed it already has its notions of sin, guilt and redemption, its sacred texts and venerated leaders. And like all false religions, radical environmentalism has its share of zealots….

The Green Religion was certainly starting to take off when I was a radical counterculturalist in the late 60s and early 70s in America. It has now morphed into a full-tilt quasi-religion. It is now in fact a major cult. And like so many cults, it can be very dangerous indeed.

The Jonestown cult in Guyana resulted in the death of some 900 people. Many willingly drank the poisoned Kool-Aid. Today we have equally disturbing green cults that are also forcing us to drink the Kool-Aid. And if we don’t there will be hell to pay.

Forget about those poor lambs and cute bunnies they claim to be so concerned about. This is all part of the radical, militant left’s war on the West. And if it means shutting down traffic or shutting down businesses, well so be it. The end always justifies the means for these activists.

As Theodore Dalrymple rightly put it back in 2010:

Just as Leninists knew what was good for the proletariat, thereby conferring on themselves a gratifying providential role, so the environmentalists now know what is good for humanity and likewise confer on themselves a providential role. The beauty of preservation of the environment as a cause is that it is so large that it would justify almost any ends used to achieve it, for a living environment is the sine qua non of everything else. You can demonstrate and riot for the good of humanity to your heart’s content; your questions about what life is for are answered.

So now we have yet another obnoxious, intolerant, self-righteous, and militant cult to contend with. Good grief.

30 Replies to “The Cult of Violent Vegan Vigilantism”