It seems that I am a recidivist. I appear to be a repeat offender. Evidently I am an evil person who must be locked away for the good of society. My humble thoughts are so damaging and threatening that in order to maintain the secular left status quo, I must be made an example of. 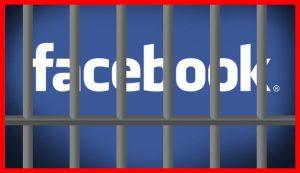 I must be locked up. I must NOT be allowed to share truth on the social media. There is nothing worse it seems than to be an independent thinker who dares to offer contrarian points of view. In the name of diversity, all diverse posts will be pulled, and all diverse thinkers will be banned. Thanks FB.

Welcome to the brave new world of big brother, if I can conflate two dystopian novels. I suspect that neither Huxley nor Orwell would have known just how bad things would get, and how soon. They of course had the model of totalitarian communism in full view, and they sought to alert others to what might befall them if they were not careful and vigilant.

Well, they likely never dreamed that things like Facebook would come along and greatly assist in the efforts dreamed up in Brave New World and Nineteen Eighty-Four. The 1931 and 1949 novels both offered sober warnings of things to come, but even these prescient writers may not have seen how very rapidly and thoroughly things would turn so very ugly.

It certainly is Orwellian. Outfits such as Facebook, Twitter and Google and the like seem to know more about each and every one of us than any past dictatorship could have dreamed about. And if anyone dares to step out of line, punitive measures will summarily be taken.

Dissenters will be dealt with. We see this of course everywhere. The Israel Folau case is one massive example of how verboten thoughts and speech will be swiftly punished with no mercy shown. I have already penned four pieces on that sad saga.

And the ugly fallout of it still continues. Because some AFL footballers and Christians such as Gary Ablett have dared to support Folau, they too are under the totalist spotlight. They too are now considered to be public enemy number one, with their very careers at risk.

Similarly, even in the UK, athletes who had the gall to actually agree with Folau in public were hauled before the grand inquisitors. As but one example: “Billy Vunipola given formal warning by RFU over Israel Folau support.” The news piece opens:

Billy Vunipola has been issued with a formal warning by the Rugby Football Union for a homophobic comment made on his Instagram account last week. Vunipola was summoned to talks by the RFU to discuss a post that read, “Man was made for woman to pro create that was the goal no?” The England No 8 liked a social media post by the Australia full-back and fellow devout Christian Israel Folau, who stated that “hell awaits” for “homosexuals”. An RFU statement read: “Following a meeting between the RFU and Billy Vunipola, the Saracens forward has been issued with a formal warning under RFU rule 5.12 for conduct prejudicial to the interests of the union or the game.”
www.theguardian.com/sport/2019/apr/16/billy-vunipola-issued-formal-warning-rfu-israel-folau-homophobic-comment-rugby-union

Wow and double wow. How dare this inhuman monster actually declare in public that male-female unions are somehow the way to go? Off with your head, you filthy bigot! How dare you bring such disrepute on the game and on society. We will teach these filthy scum to toe the line!

I have documented countless cases of such Big Brother repression in action. And the two biggest shibboleths in the West today are without question Islam and homosexuality. Dare to speak even the slightest word against these two monoliths, or dare to even ask a question, and you WILL be dealt with accordingly.

And that brings me back to Fascistbook. I am beginning to lose count of how many times the thought police there have incarcerated me. I do know that some other folks have managed to get even more jail terms than I have. Some folks seem to have only a day or two on FB before they are right back in the slammer again.

But even more surprising is that some of my FB buddies have never been sin-binned at all! It clearly is time for these folks to lift their game. They need to step up here. They obviously have been far too timid and mousy. Speak now! Join the rebellion against the evil empire!

As to my particular sins, often I have no idea why the totalitarians have pulled me off their platform. Usually I am never told of my transgression. Like the Soviet show trials of old, most folks have no idea what they are being charged with. Straight off to the Gulag you go.

This time it did show the “offending” post. And it had appeared over a month ago! Good grief. It occurred just as the Christchurch shooting had taken place, and BEFORE anyone was talking about banning the killer’s manifesto. All that the post entailed was a pic of Tarrant along with these words:

“The powers that be seem intent on keeping you from reading Tarrant’s manifesto – it is being pulled down everywhere. Good thing I had a look at it earlier and quoted from it in my new article. I am sure some folks have saved the entire piece however.”

I did not quote a word from it. I did not provide a link to it. I merely said what had been readily available to read a few hours earlier was now being removed – for whatever reason. For daring to share that back then, I am now in FB Gulag for another lousy month.

Hmm, so it seems the censors at FB are now going after criminals like me retroactively. Now it seems that anything I have ever said or shared is fair game. Hmm, I might have once criticised FDR in the 40s. I may have mentioned Lenin in a negative light in the 30s once. I may have taken a dig at Marx in the 1800s. I guess they will find those remarks and ban me some more!

To which some folks might ask: why bother? Why stay on this totalitarian and censorious site? Well, as I have said before, it is part of my ministry. It is part of the way I can share truth in the public arena. It is part of how I share the gospel and other truth.

And some folks have gotten saved, many have been discipled, and many have had their eyes opened to various things. So it has been a fruitful ministry. It has done some good. Yes, I am also looking for alternatives, and a while back I did join MeWe, another social media site, but one which so far has shown no signs of emulating Stalinist Russia.

But I have only a fraction of the friends there that I do on FB, plus it seems to be a whole lot quieter with not a lot going on. So if possible I like to be on things like FB simply to share truth and give an alternative point of view on so many important issues.

Sure, some folks have given up in disgust and left it altogether. One FB buddy and expert on Islam, David Wood, has just pulled the plug. He was all rather gleeful when he did, as can be seen here: www.youtube.com/watch?v=Wt5sahmFU2k&feature=youtu.be

His 23-minute video is well worth watching – please do. He shares many of the same concerns that I have, and he is rightly incensed at the appalling censorship and bigotry of FB. He did well to document the many cases of FB tyranny. Have a watch – it is utterly shocking what he has been banned for!

I am not sure how many people have left FB, but we need a mass exodus to have any sort of impact. We need many folks to join other pages such as MeWe. Who will join me? Who will take a stand for free speech? Who is fed up with the militants at Fascist book destroying free speech and imposing draconian censorship?

It is time to take action now, before it is too late.

Oh, one more thing: If you are on Facebook, can you post a link to this article thanks? Or at least mention that I am in the FB slammer again for a month? For that matter, if you can link to all my new articles for the next 30 days that would be greatly appreciated. I will return the favour when you get sin-binned!