In one week the Australian electorate goes to the polls. I may be in America at the moment for a brief period, but the importance of this election is certainly on my mind each and every day. Will the great values of faith, freedom and family be maintained and strengthened, or will they finally be snuffed out?

Yes I think this election is that serious. While the Liberals and Nationals are no panacea for what ails us, a Labor/Greens win will be disastrous for the nation. I have earlier written on just what is at stake in this election: billmuehlenberg.com/2019/04/30/what-a-labor-win-will-mean-for-freedom-religion-and-children-in-australia/ 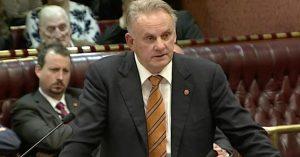 With all this in mind let me refer to a powerful speech delivered on May 8 by Mark Latham. The former Labor Party leader is now head of One Nation in NSW and was recently elected to the Legislative Council . Broadcaster Alan Jones called his inaugural speech “The most outstanding political speech I have ever read”.

Latham is an interesting character. He may have been part of a major leftist political party for many years, but he has long had conservative instincts. I have had brief contact with him over the years, and this has long been apparent. And he makes no claim to being a devout Christian, so his speech is all the more interesting.

His 5478-word address was a breath of fresh air in so many ways. Unlike most Australian politicians, he seems unashamed in promoting the Judeo-Christian worldview and values, and standing against so much of the leftist PC nonsense.

But enough talk from me – with so much good material to be found in his speech, let me finish this article by quoting heavily from it:

Among the Leftist elites, among the social engineers and cultural dietitians, sneering at our civilisation and its achievements has become their new pastime. They preach diversity but practice a suffocating cultural conformity, wanting everyone to be just like them. They argue for inclusion but as soon as a Christian, a conservative, a libertarian, a nationalist, a working class larrikin, an outsider from the vast suburbs and regions of our nation disagrees with them, they crank up their PC-outrage machine to exclude them from society.

The Leftist project, then and now, is about control. Having, with the fall of the Berlin Wall, lost the struggle for economic control, the Left got smarter. It shifted from the Cold War to a culture war. It moved from pursuing economic Marxism to pushing cultural Marxism.

Instead of trying to socialise the means of production, it’s now trying to socialise the means of individual expression and belief – our language, our values, our behaviour. Instead of seeking revolution at the top of government, it has marched instead through our institutions – a tactic that’s harder to combat. The elites have been remarkably successful in this cultural invasion.

Our abiding national traditions of free speech, merit selection, resilience and love of country are being lost, not just in the public sector – in schools, universities, public broadcasters, major political parties and government agencies – but also in large parts of corporate Australia and the commercial media. The rest of us are the Resistance to this national takeover.

Our chief ally is evidence. Evidence and human nature. Through the power of reason and enlightenment, people want to have a say about the things that are important to them. They want free speech. They want freedom of religion and belief. Australians are also a tough yet fair-minded people.

It comes from our origins in colonial times, the things depicted in Talmage’s painting. The Australian story in settling a harsh and sometimes hostile continent on the other side of the world is one of the most remarkable in human history. Leaders like Arthur Phillip and Lachlan Macquarie, in little more than a generation, turned a penal colony into a civilisation – building what has now become the best nation on Earth.

It was achieved through resilience and mateship – the Australian habit of toughing it out and treating others as equals. Jack is as good as his master. It’s in our nature to treat people as we find them – to judge them on their individual merit, their work ethic, their community contribution. This is what makes identity politics – subdividing our people on the basis of race, gender and sexuality – so foreign to the Australian way.

Just as the old Soviet Union fell over because human nature wanted economic competition and individual wealth and excellence, I believe these new mutant strains of social control – post-modernism and identity politics – will also fail. They run contrary to the nature and evidence of our lives….

NSW needs freedom of speech laws, even for its own MPs. And also new laws for the protection of religious freedom. Mr President, as I’m sure you appreciate, many migrants came to Australia to escape religious persecution. Now they are saying the problems in their home country have followed them here. I’m not a Christian but I recognise the vital contribution of Christianity to our civilisation: its vast social and charitable work; its teaching of right and wrong in civil society.

Mr President, I stand with Israel Folau. In his own private time away from his job playing football, he’s a preacher at his community church and naturally, he quotes the Bible. He believes, as millions of people have believed for thousands of years, that sinners go to Hell.

As per his valid religious faith, he loves the sinner but condemns the sin. Yet for his beliefs, his Christianity, he is not allowed to play rugby, to chase the pigskin around the park. How did our State and our nation ever come to this? I was on Folau’s list of sinners, more than once actually. But as I don’t believe in Hell, there was no way I could take offence.

Those claiming outrage have fabricated their position solely for the purpose of censorship. This is not an argument about diversity. The Wallabies have no female players, no disabled, no elderly, no middle aged. They are selected from a tiny fraction of the young, fit, athletic male population. By excluding a committed Christian, they are making their game less inclusive.

And as for Folau being a role model for young gay men, one only needs to state this proposition to understand its absurdity. Footballers are not role models for anyone, other than in enjoying their sporting ability. I say to any young person: if you are looking for guidance and inspiration in life, study Churchill, Lincoln, Reagan and Roosevelt, not Todd Carney. By the way, that’s Ronald Reagan, not Reg Reagan.

Mr President, I believe that no Australian should live in fear of the words they utter. No Australian should be fearful of proclaiming four of the most glorious words of our civilisation: I Am A Christian. No one should be sacked by their employer for statements of genuine belief and faith that have got nothing to do with their job.

The Folau case exposes the new serfdom in the Australian workplace: how big companies, the corporate PC-elites are wanting to control all aspects of their employees’ lives – their religious and political views, how they speak and think, how they behave, even in their own time away from the workplace. This is a stunning intrusion on workers’ rights. Yet far from condemning the new serfdom, Labor and the trade unions have been cheering it on….

As per our One Nation election commitments, I will be moving legislation for the protection of free speech, religious freedom and the privacy rights of workers. Mr President, The fightback for freedom is long overdue. As is the fightback for fairness.

I mentioned earlier that for most people, identities of race, gender and sexuality are fixed. People are born a certain way and shouldn’t be judged by the things in life they can’t change. To do so is to practice the poison of identity politics. It’s become the great obsession of Leftists everywhere; even though for normal people, it’s not the way in which they live their lives.

No one wakes up in the morning and thinks ‘I’m male or female, I’m black or white, I’m straight or gay’. They start their day as workers, as parents, as family members, as community contributors. Not only is identity politics irrelevant to most people, it’s a betrayal of social justice and social democracy.

In the 80s and 90s we were told to look through a person’s race, gender and sexuality. Things like skin colour were irrelevant to a person’s true character – to their work ethic, to the way in which they care about others, to the individuality of their existence. There was no need to lump them into broad, unrepresentative categories based on the primitive notion of how they look….

Divisive identity politics subdivides our society, destroying its sense of common good. And it leaves the Rainbow Left impotent: they have no solution for the white welfare dependent man in a public housing estate. In fact, far from helping him, perversely and tragically, they define him as part of the problem. Imagine how he feels when he sees other identity categories gaining special treatment.

Mr President, I have studied these things all my adult life and I come to this chamber convinced there is only one way of running a fair society and that’s through merit. The best person for the job must get the job, regardless of race, gender and sexuality….

For the past 14 years I’ve had the greatest joy and responsibility of my life: as a home dad, as a primary carer, giving support and all my love to my wife Janine and our three children, Oliver, Isaac and Siena. When I left the Federal Parliament in 2005, the words of the former Member for Bass, Warwick Smith, echoed in my ears: “Every day you spend away from your children is a day you never get back.” The days and years with my children have been the best of my life but now they are so much older and, through them, having seen what the government school system has become, it was time to come here to do something about it….

Not bad for a non-Christian and a former Labor leader! Sure, I differ in some key areas with him, and I pray he one day comes to personally know Jesus Christ, forgiveness of sins and newness of life. But I am glad he is back in politics, and I wish more politicians were as bold, non-PC, and sensible as he is.

You can watch the entire 39-minute speech here: www.youtube.com/watch?v=Nz-Nzs92X5s&app=desktop

And you can read it in full here: www.onenation.org.au/mandatory-reading-mark-lathams-maiden-speech/

22 Replies to “Mark Latham and the Future of Australia”