Who and what? I refer of course to Hollywood lefty Alyssa Milano, and the compound word derived from the Greek: ‘miso’ means hate, and ‘pedo’ refers to children. Milano and so much of the secular left really do seem to hate children. They certainly see abortion as one of the great causes of all time.

And as I have documented repeatedly here, the left is working overtime to destroy our children, take away their innocence, and turn them into sexualised antinomians. But their deep and abiding love of all things related to baby killing is especially to be noted. 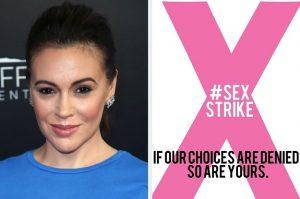 We all have heard the various lunatic outbursts from the politically active but mentally and morally stymied actress in the past, and her latest is a real lulu: going on a “sex strike” because of prolife legislation passed in Georgia. The state recently passed legislation banning abortion after a baby’s heartbeat is detected.

Around 20 US states now have such legislation passed or  being debated. I have written about Milano and the Georgian laws previously. In March Milano tweeted, “There are over 20 productions shooting in GA & the state just voted to strip women of their bodily autonomy. Hollywood! We should stop feeding GA economy.”

Not to be outdone, on Friday she tweeted this: “Until women have legal control over our own bodies we just cannot risk pregnancy. JOIN ME by not having sex until we get bodily autonomy back. I’m calling for a #SexStrike.” And it got even worse a few days later when she tweeted: “We can LOVE sex and fight for our bodily autonomy. There are lots of alternatives to cis men. Protect your vaginas ladies. Men in positions of power are trying to legislate them.”

But a trans activist called ‘sam’ challenged her: “not all ‘ladies’ HAVE vaginas. some have penises. its not hard to put ‘cis’ before ‘ladies’. but you chose not to try, and that’s transphobic behavior ”. Incredibly, Milano tweeted back, “You’re right. If I could edit I would, Thank you.”.

Good grief. So much can be said about this. The pathetic grovelling before the trans tyrants is just one sorry spectacle on display here. But one obvious point is the bizarre irony going on here: a Hollyweird lefty and sexual libertine is now actually spruiking for abstinence!? Hey, that is what us Christians and conservatives have been urging all along.

So if she wants to insist on there being less sexual activity, resulting in less children being aborted, that is fine by me. And others of course have pointed out the silliness being pushed here. Mark Steyn said that up till this point, most pro-abortionists said that “abstinence education doesn’t work, so we have to have abortion [rights]. But abstinence apparently does work when Alyssa Milano is commanding it.” Paraphrasing her tweet, he said, “We just cannot risk pregnancy. Join me by not having sex.”

Conservative commentator Katherine Timpf noted how decidedly un-feminist this all was:

Although Milano may not realize it, her attempt at progressive activism was actually the opposite of feminist. Let me be clear: Calling for women to go on a “sex strike” isn’t “woke” or cool, it is sexist and harmful. Why? Because it promotes the antiquated narrative that women have sex only as a concession or gift to men, not because they enjoy sex for its own sake. This is not feminist; it’s patriarchal.
www.nationalreview.com/2019/05/alyssa-milanos-anti-feminist-sex-strike/

However absurd Milano’s sex strike might look to conservatives, it immediately caught on with the mainstream and social media, not just because of her star power, but because she managed to snag so many hot-button issues into one cause. While the sex strike won’t catch on, and it’s easy to see how flawed each of Milano’s ideas are when they’re broken down, the sum of its parts is a primer on leftist logic.

The left abandoned reason, morality, logic and a higher good long ago. However, those are still compelling aspects of society. Most Americans still operate within moral codes and boundaries, even if they don’t admit or recognize it. Thus, when the left really wants to be compelling, they prop up moral notions they previously eschewed as worthless in order to be persuasive. Sometimes it works.
thefederalist.com/2019/05/14/5-things-alyssa-milanos-sex-strike-gets-wrong-sex-abortion/

Joe Bissonnette spoke about why older lefties are so supportive of abortion. He noted that Milano, who is 46, “has been joined by better known and even older actors Alec Baldwin (61) and Bette Midler (73) in what can only be viewed as a desperate attempt by the elderly to appear young and edgy. The weaponization of sex is not a new theme in life or in art.” He continues:

Pro-abortion militancy among the elderly is a dark but fascinating study. No longer rooted in the hot-blooded desire to emancipate sex from babies and responsibility, it points to a range of murkier psychological crises. Milano is old enough to be a grandmother and Midler old enough to be a great-grandmother, yet they make cringe-worthy vows and protestations about their sexual activity. Perhaps it’s a conscious or subconscious variation of the Peter Pan Syndrome, a refusal to grow up and take adult responsibility, resulting in a rejection of what sociologists refer to as the grandmother hypothesis. Basically, humans are one of the few species that have menopause, and sociologists think it is to facilitate grandmothers in assisting their adult children in raising their grandchildren.

Most people happily accept the arc of life and the transformation from infantile selfishness to parental other-directedness, but not all. Some make a vice appear as a virtue, proposing the superiority of caring for animals rather than children. Milano has said: “Every time I decide I want a child, I get another pet. I have 3 dogs, 13 birds and 3 horses, what does that tell you?” Others, like Bette Midler, advocate the meaningless plasticity of human sexuality by championing the transgressive. According to Wikipedia, Bette Midler “…built up her career singing in the Continental Baths, a local gay bathhouse where she managed to build up a core following.”
www.lifesitenews.com/opinion/one-possible-reason-why-aging-hollywood-actors-strongly-support-abortion?utm_source=LifeSiteNews.com&utm_campaign=9d47625fd3-Daily%2520Headlines%2520-%2520U.S._COPY_502&utm_medium=email&utm_term=0_12387f0e3e-9d47625fd3-401398773

Yes there is plenty of lunacy going on here, and Milano is not alone in wallowing in all this. But if we end up with a bit less wanton sexual activity, and a few less abortions, then she may have performed a useful service here.

11 Replies to “Milano and Misopedia”