Cultural decline is always around us. Those people seeking to preserve the good and withstand the bad are always surrounded by forces and folks ever at work to tear down and destroy. There is always darkness and destruction all around us, and those seeking to maintain light and life are routinely in an uphill battle.

It is always a battle, and it is always a spiritual battle, as all Christians should know. I am reminded of a great quote by J. I. Packer concerning the Puritans in this regard: “Spiritual warfare made the Puritans what they were. They accepted conflict as their calling, seeing themselves as their Lord’s soldier-pilgrims, just as in Bunyan’s allegory, and not expecting to be able to advance a single step without opposition of one sort or another.” 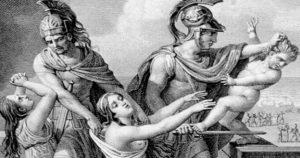 Those battles are occurring all over the West. I am in the middle of a brief visit to America, and at the moment back in my smallish home town. While much of this sleepy town remains the same, even after many decades of being away, there are also some things that are quite different.

One concerns the matter of abortion. I was driving along yesterday on a main street and noticed someone walking along with a sign. As we got closer I could see words like “Pray for the unborn” on the placard carried by this young woman.

I had been told the day before that a baby-killing mill had opened here. Planned Parenthood – or more accurately, Planned Barrenhood, or Planned Extermination – had just in the past half year or so opened an abortion mill here, and groups of concerned prolifers have been having a peaceful presence there.

Thankfully they do not yet seem to have those notorious exclusion zones in place, preventing prolifers from getting anywhere near such a house of death like we do in so many parts of Australia now. But they will likely come to this small town soon enough.

Speaking of Australia, in a day or so the federal election will take place. One of the defining issues of this crucial election will be how we treat the unborn. The Labor Party has been perfectly clear on what they intend to do. They basically want open slather, with free (taxpayer-funded) abortion for everyone.

As Pastor Mark Powell put it, “With the Deputy Leader, Tanya Plibersek, aggressively pursuing such a comprehensive pro-abortion policy, a Rubicon has finally been crossed. Because voting for Labor is no longer a matter of conscience but quite literally, a matter of life and death.”
www.spectator.com.au/2019/03/labors-new-abortion-stance-merciless-unjustified-and-simply-wrong/

The return to paganism

Imagine that: ‘Free Abortion For Everyone!’ If that is what you want to be known for as a political party, we are all toast. This is the end of civilisation as we know it. This is simply a return to paganism, clear and simple. Labor is now the official Pagan Party.

Abortion, child abandonment, infanticide and a general disrespect for human life were all hallmarks of the older pagan societies. Christianity came on the scene and slowly – over many hundreds of years – pro-death paganism gave way to pro-life Christianity.

Radical social implications of the gospel have been there from day one. In the dark, pagan days after the life, death and resurrection of Jesus, the light of the gospel resulted in a complete turnaround of society. The condition of women and children, the poor, slaves, and other marginalised groups all improved remarkably under the rise of Christianity.

As but one important source on this, consider Rodney Stark’s 1996 volume, The Rise of Christianity. There he documents how Christian compassion and social concern saw the faith grow rapidly, and change the world it found itself in. Looking after the sick and needy, and treating victims of epidemics and pestilence, while the pagans fled, resulted in the conversion of many. The respect for the sanctity of life, and the rejection of common practices like abortion and infanticide also were noteworthy.

Infant abandonment, which was widespread back then, was another action radically turned around by the new faith. Christians looked after these abandoned babies, and changed the culture from a culture of death to a culture of life. Thus Christianity really did create Western civilisation, taking the world out of a bloody and uncaring pagan past.
billmuehlenberg.com/2013/05/29/baby-abandonment-and-the-new-paganism/

Recently Australian biblical studies lecturer Louise Gosbell penned a lengthy article on these matters. Here she mentions three things the early church did about such wanton disregard for human life:

First, the early church openly condemned the practices of infanticide and exposure, despite the fact it was a socially acceptable practice throughout the Graeco-Roman world. While they did not specifically address the plight of infants with physical deformities, they did vehemently oppose the general practices of infanticide and exposure based on the belief that God created all people in his image, and thus each human is imbued with an inherent value. In comparison to the Graeco-Roman world, which generally considered one’s worth to be based on the value of the contribution one could make to the greater community, the early Christians promoted the idea of inherent value that came from being created in the image of God. As Gary Ferngren summarises, “In their blanket condemnation of exposure the Christians implicitly affirmed the right of even the defective to live.”

Second, the church responded to the practices of infanticide and exposure through their care of exposed infants. From the earliest days of the Christian church, Christians collected funds for distribution to the poor and sick. As part of their concern for the vulnerable members in their community, the early Christians acted to protect exposed infants. This was done through the development of hospitals with designated sections for foundlings and through the later development of orphanages that would house and care for foundlings as well as for infants whose parents had died. Indeed, the Christian church gained such a reputation for their care of exposed infants that churches became the established site for abandoning infants.

Finally, the response of the early church can also be seen from a political and legal perspective. Whereas imperial law “neither penalized nor promoted the abandonment of newborn infants,” in 331 CE the Christian Roman emperor Constantine revoked the ruling that allowed exposed infants to be reclaimed by their parents as a means of deterring those who were exposing their infants and reclaiming them at a later stage. Exposure continued to be an issue throughout the empire, however, and in 374 CE Constantine’s successor, Valentinian I, passed down the first law requiring parents to rear their children. Valentinian I also decreed that the killing of an infant was a capital offence. Eventually, in 529 CE, another Christian Roman emperor, Justinian I, “overturned all previous regulations on the status of expositi.” Henceforth, “all abandoned infants, whatever their status at birth, were to be considered freeborn” and could no longer be kept as slaves.
www.abc.net.au/religion/early-christianitys-resistance-to-infanticide-and-exposure/10898016

Christians have always had a deep and abiding respect for human life – especially for our youngest members of the human race. And that profound love and care of our most vulnerable continues right up till today. Think of that brave, lone young woman on the streets with a sign outside of an extermination centre.

God bless that woman. We leave my hometown today, but if we had stayed longer, I would like to go back and see if others are there today. If so, I would go to them and thank them from the bottom of my heart. And I would pray for them and bless them.

But Australians also have a very important thing they can do about life as well in the next 40 hours or so. They can vote carefully and prayerfully in the national election. One party has unambiguously proclaimed itself to be the Party of Death. I fail to see how any person who claims to be a follower of Jesus Christ can even contemplate voting for this pro-death party.

And if they do, they will have to one day stand before our life-giving Lord and give an account.

18 Replies to “America, Australia and Abortion”