It has just turned past 9 am on Friday here in America’s midwest, but in Australia it has just become Saturday morning. This is D-Day for the nation: election day. Will the Australian people throw away their imperfect but worthwhile past, or will they stand against the radical nihilism of the left?

We will soon know. In around 20 hours the voting will have stopped around the nation, and the counting will begin. Will Bill Shorten and Labor get in, and continue their destructive anti-life, anti-family, and anti-freedom policies, or will Scott Morrison and the Liberals and Nationals retain power? 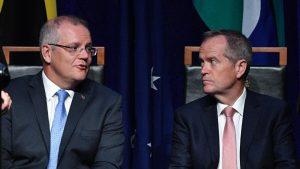 The latter are by no means a panacea for what ails Australia, but they are still much better in many of the key areas I just mentioned. At least they will put the brakes on the downward spiral somewhat. Given just how degenerate and decrepit all of the West is becoming, a Liberal government will at least give Australia some breathing time.

But too many folks – including too many Christians – reverse this order. They put all their hopes in political solutions. But politics flows downstream from culture. And the culture is determined by the religious makeup of a people. A largely secular left populace which has no place for God and enduring truths and moral values will lead to a hostile culture. And that in turn will be reflected in bad political outcomes.

So at the end of the day, repentance and revival are our only real hope. But that does not mean we ignore politics or pretend it does not matter how we vote. It DOES matter. Indeed, try telling Israel Folau that the culture wars and the politicisation of sport – and everything else – does not matter. Just hours ago he was finally and officially fired, all for quoting from the Bible on his own social media page.

One writer just wrote this about him for the UK Spectator:

Perhaps the important wider question arising out of this incident is whether we want our athletes to be ‘blank slates’ when it comes to their views and beliefs. Much of the commentary on the Folau incident seems to conclude that he’s perfectly entitled to his beliefs, but he can’t talk about them publicly. Do we all think that star athletes should just shut up about their views and beliefs until they retire?

It’s also clear that sponsors should not be given an unchecked right to censor or shape the views of players. A recent example of a sensible compromise on this was when New Zealand rugby star Sonny Bill Williams, who is a Muslim, was exempted from wearing the logos of banks, alcohol brands or gambling companies on his club’s kit. On announcing the move, the general manager of NZ Rugby said: ‘Sonny holds clear religious beliefs in relation to this matter and we respect those’.

As a long-suffering Arsenal fan, I remember the days of Dennis Bergkamp, one of our better players, who had a fear of flying. He was affectionately named the ‘non-flying dutchman’, but it was a real pain because we generally lost away games in Europe that weren’t easily reachable by bus. However, it’s not a stretch to imagine an athlete saying that he wasn’t going to fly – not because he was scared, but because he thought that carbon emissions were destroying the planet. How comfortable would we be for that player to be sacked because his views conflicted with the interests of an airline sponsor?

Israel Folau could certainly have expressed his views in a more sensitive manner, but to be fired for expressing them is, in my view, an absolutely travesty for freedom of expression in sport. To suggest that the removal of Folau is in the pursuit of ‘tolerance and respect’ makes a mockery of the terms, and as some of Folau’s teammates have already noted, it sends out a chilling message to all those who share his views. Folau has said that he is considering his options, and certainly I hope to see a court overturn this decision in due course. If Rugby Australia’s management genuinely wants the sport to be ‘inclusive for all’, it needs to start by including players that it disagrees with.
blogs.spectator.co.uk/2019/05/israel-folaus-sacking-and-the-right-to-freedom-of-expression/

Of course what happened to him is just the tip of the iceberg, and a Labor win will see this multiplied a hundred times over. We will all be at risk. Every Christian who dares to share his faith in public will be doing so at their own peril. Labor and the Greens have made this perfectly clear.

Freedom will take a hammering in the brave new world of the secular left, with religious freedom especially being greatly constrained, if not eliminated altogether. If you think things seem bad now, you will not imagine how much worse they will get if Morrison and Co are dumped today.

It really will be the beginning of the end. Of course I and others have been warning about these things for decades now. Sadly most of the warnings have gone unheeded. Now we stand at the crossroads. Today’s vote will have implications far beyond a possible change of political party.

Everything will change. All I can do is plead with you at this late hour to vote wisely. Our very future is at stake. God have mercy on Australia.

19 Replies to “Is This the Day Australia Commits Hari-Kari?”