On Saturday May 18 Australia decided who should run the country: Scott Morrison and the Liberals, or Bill Shorten and Labor. Although there are still more votes to be counted, we now know the results: the Liberal/National Coalition will get back into office.

This will add to the past six years that they have already been running the country. This will be, as I have written about so often now, very good news indeed, all things considered. It would have been real bad news for those who care deeply about faith, family and freedom if Labor had gotten in. 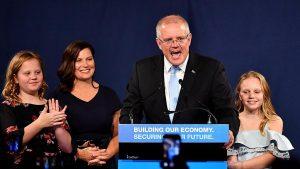 Politically speaking, this would have proved to be disastrous for other important things, including the economy and international relations. That too I have discussed elsewhere. But now we have a rejection of the radical left’s agenda, and a return to more sensible government.

Much can be said about this incredible win. Bill Shorten seems to have lost the unlosable election. Everyone thought it was a shoo-in. Hardly anyone predicted a win for Morrison. But it has happened, stunning pundits and political observers alike.

As to the actual election details, this seems to be the current state of play: The Liberals appear to have won at least 74 seats so far out of 150 total seats in the lower house. A few more are expected to go their way in the hours ahead. The Libs got around 42 per cent of the primary vote, which is very good indeed. Around 33 per cent went to Labor and 10 per cent to the Greens.

Champions such as George Christensen were easily returned to office. But a big loss for the Liberals was Tony Abbott. He had won in a landslide six years ago, leading the Libs to a big victory then. But he was diabolically undermined by Turnbull. So now he is gone, but so too is Turnbull, and Pyne, and Bishop, and some other lefty Libs. That will make things a lot easier for the Morrison government.

Labor losses include the following: Shorten has now lost two elections and has stepped down as Labor leader. Like Hillary Clinton in America, he is the twice-failed candidate, and a new leader will have to be found. Also, lesbian activist Kerryn Phelps may lose her seat.

The traitorous ex-Liberal Julie Banks is also gone. And Clive Palmer did not pick up any seats. All up it was also a bad night for the Greens and GetUp! All the hoopla about climate change that Labor ran with was a real fizzer. Like the Trump and Brexit wins, the people preferred to go in a conservative direction, and they may not have told the pollsters their exact intentions.

Common sense and a conservative mood prevailed in this election. All the loony climate change activism of Labor which would have cost Australia and Australians so very dearly economically and in other ways was clearly rejected by the Australian people.

People saw through the Labor spin, seeing Shorten for what he was: NOT a man of the people, but a wealthy, remote and removed elitist. He was a thorough-going leftist who would have done so much damage to Australia. The Australian people have said ‘no’ to that.

And this election was also a big win for religious freedom. As I and others documented countless times, a Labor win would have spelled the end of religious liberty, and would have resulted in a massive crackdown on Christians and Christianity especially. Now we can breathe a bit easier, but we still must be ever vigilant in this area.

Finally, it needs to be pointed out that one of the greatest highlights of the whole evening was to see all the leftist true believers commenting on ABC television get more and more glum and depressed as the night went on! That in itself was a huge plus!

Given that almost all the pundits and pollsters fully expected a Labor win, one has to ask if this was not a miraculous win – a major God thing. Of course there were so many Christians who were praying and fasting, knowing how significant and serious this election was.

This clearly had to be the work of God. There really is no other explanation for it! This result had caught almost all the experts and commentators by surprise. But our God is a God of surprises, and a God of the miraculous. Indeed, Morrison began his acceptance speech by speaking of how he believes in miracles.

And this win is a clear indication of the overwhelming mercy and grace of God. We surely did not deserve this. Australia is so far from God that he had every right to throw us under the bus. We deserve his judgment, but instead he granted us some wonderful mercy. Thank you Lord.

But as with all the election results we have had of late, I keep saying much the same thing, regardless of which election it is, or who gets in. At the end of the day we need much more than politics to save the nation. Our problems at root are much greater than mere political problems.

At the end of the day only deep repentance and revival will turn around this nation. In many ways this victory is only a reprieve. It has given us some more time – more time to do what really matters. Getting on our faces before Almighty God would be a good thing to do in this interim period. Thanking him, praising him, and renewing our commitment to him would be a good place to start.

But don’t get me wrong: this is still a wonderful victory and we need to thank God for it heartily. Churches that are still true to God and his Word need to proclaim a national day of thanksgiving. We all owe so much to God in this win. We certainly did not deserve this divine mercy, but we got it.

Pray for Scott Morrison and what will be his new team. Pray that they all will serve God humbly and bravely, and seek to put God first in all they do. Pray also for their families. And please engage in spiritual warfare as well. Satan and his minions are now furious with these results, and they will be working overtime to subvert and destroy the Morrison government.

The battle has now just begun. It is at root a spiritual battle. We all must pray as we have never prayed before. Things will now only intensify, and the hatred and bitterness and divisiveness will only get worse. If you thought things were bad before the election, wait till you see what will follow. So please pray and keep alert.

But thank you Lord for granting us this merciful reprieve. Thank you!

58 Replies to “Miracles and the Australian Election”