Ordinary Australians as well as biblical Christians were clearly delighted in Saturday’s election outcome. Instead of a progressive leftist government further coercively pushing all the radical causes, we have a government that should govern sensibly and responsibly for all Australians. 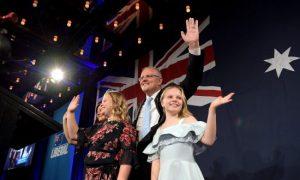 The people of Australia said ‘no’ to political correctness and all the radical special interest groups: the militant unions, the sexual radicals, the climate alarmists, the open borders’ crowd, and those who have declared war on religious freedom. They said ‘no’ to out-of-touch leftist elitists, and said ‘yes’ to normal Australian values.

Scott Morrison was seen as a man of the people, while Shorten was seen as someone who could not relate to ordinary Australians. His repeated refusal to answer honest questions – for example, about the costs of all his wild policies – turned off many voters. He even said such questions were “dumb”.

Some thought the death of the larrikin former Prime Minister Bob Hawke might help his chances. No way. The wealthy and aloof Shorten who disdained the common man had little in common with Hawke. ScoMo had more in common – feeling at home with the average Australian, and understanding their concerns.

The Labor Party of today – with Shorten, Wong, et al, and their bedding up with the loony Greens – is such a far cry from what it used to be. As Kim Beazley Sr. famously said way back in 1970: “When I joined the Labor Party, it contained the cream of the working class. But as I look about me now all I see are the dregs of the middle class. And what I want to know is when you middle class perverts are going to stop using the Labor Party as a spiritual spittoon.”

That about nails it. That is the modern Labor Party – and Beazley could see this happening already five decades ago. Just as Americans preferred Trump to the elitist, globalist Clinton, so Australians preferred one of their own to the lunar leftist agenda of Shorten and Co.

Indeed, one can ask if this might be part of a bigger global shift. We have now had wins for Trump, Brexit and Morrison. In all three cases the outcome was fully unexpected. Nearly all the experts and pundits predicted a Clinton win, a no-Brexit win, and a Shorten win.

Wrong, wrong. Wrong. Maybe we will see more swamp-draining take place – perhaps Macron, Merkel and May will soon be ousted by people power. And while we are at it, why not get rid of Trudeau, Ardern and the other radical leftist rulers as well?

So what happened in Australia may be part of a larger trend in the West. Let’s hope so. As I said in yesterday’s piece, this certainly was a miracle. Almost everyone sees it as a massive surprise – something that almost no one had expected: billmuehlenberg.com/2019/05/19/miracles-and-the-australian-election/

The words of Australian commentator Daryl McCann are worth quoting here:

In my 2018 Christmas Eve post, “The Ghost of a Christmas Past”, I suggested – rather than predicted, to be fair – that Scott Morrison could win on Election Day if he adequately made a case that the Coalition represented some kind of respite from the remorseless PC encroachment of the Labor and the Greens. Morrison turned out to be a brilliant – and more or less solo – campaigner. The reason he was so dazzling, I suspect, is that he is an undivided and integrated person. Marriage has liberated him, not shackled him. The family life has not encumbered him but blessed him with two miracles. His passion for the Sharks has not limited him but given him a knockabout community to enjoy. And Christianity, contrary to Shorten’s appraisal, has not turned Scott Morrison into a narrow-minded bigot but given him the grace, humility and fortitude to address the real fanatics in our society. They revealed themselves during the campaign for what they really are, from Adani and genderless birth certificates to Shorten’s anti-Christian jibe. A majority of Australians realised that Scott Morrison – if not the Liberal Party as a whole – does constitute a potential respite from PC madness. Perhaps we might start with protecting Christian schools, Mr Morrison.
quadrant.org.au/opinion/qed/2019/05/mr-morrisons-man-in-the-street-miracle/

Responding to the religious left

While it was certainly a miraculous win indeed, one that so many Christians were cheering about, sadly some Christians were not. Some in fact were quite upset – they actually wanted the hard-left Labor/Greens in office! I kid you not.

I have even had some of these disgruntled Christian lefties come to my site, informing me of how unhappy they are about all this. I tried to reply to them as best I could, but sometimes you wonder how far you can go in these discussions. So often those on the left prefer to moralise and emote a lot, rather than engage with fact, evidence and the biblical data.

Thus there are various religious lefties who complained about things like climate change, actually believing the world is going to come to an end under a Morrison government. Never mind that the Shorten policies on this would have effectively destroyed the Australian economy, especially harming the poor.

Indeed, many have called this the “climate change election”. And the people have spoken: they did not want the radical Labor policies that would do basically nothing for the environment but do so much harm to our economy and standard of living – all to placate the globalist climate alarmists.

We are supposed to bow down to the EU elites and others as we radically harm our economy, all to make leftist politicians in Brussels and Paris feel good about themselves – even though Australia would contribute almost zippo to ‘saving the planet’. It sure is a good thing we dodged that bullet.

As Andrew Bolt rightly pointed out, the global warming scam “is an obsession of the pampered rich, but a curse to the working poor.” And then we would have had the Labor/Greens failed border policies as well, with more boats coming in, and more people dying as a result. That is another bullet missed, thankfully.

But the religious leftists have also complained that the poor and needy will suffer so very greatly under a Liberal government. That bluff too needs to be called. Indeed, they are simply bearing false witness: regurgitating leftist lies about conservative policies.

As I said to one of these critics:

This is a false choice anyway. All political parties of course have policies to help the poor, so that is not the issue. The real question is this: which policies actually work? Which policies in fact will help raise the poor out of poverty? Leftist policies tend to simply create a burdensome welfare state run by distant bureaucrats and create a dependency culture which in fact harms the poor – and everyone else. Biblical compassion for the poor is far, far different. It is about individuals first and foremost helping the poor, not voting in secular left governments that confiscate the wealth of the productive to hand it out as it sees fit. See more on this here: billmuehlenberg.com/2018/08/14/actually-no-jesus-was-not-a-socialist/

But as mentioned, too often for those on the left – be they religious or secular – the facts matter little, as does careful thinking. It is all about grabbing the high moral ground, emoting, and thinking that we can save the world by embracing policies that have been tried and found wanting so often in the past.

All that these folks who want the radical left version of events to be run with need to do is take a good hard look at a place where the radical left has been in power: Venezuela. That sort of basket case is exactly where all the social utopians end up taking us. See more here: billmuehlenberg.com/2018/08/12/venezuela-socialism-kills/

So the religious left is unhappy about this Morrison miracle. Well, tough luck. As I said in my previous article, this was clearly the hand of God at work, giving us at least more time to get back to the things that really matter. At the end of the day Morrison and the Libs cannot save us. Only Jesus can.

But this is a reprieve, and one in which religious liberty will at least be preserved for a bit longer. How we use this time is another matter. If you prayed and worked like mad before the election, you need to pray and work even harder now. Let’s make wise use of this breathing space that God has kindly granted us.

29 Replies to “More on the Miracle Man Morrison”