The Bible speaks about apostasy. Church history provides us with many cases of apostasy. But just what might it look like today? What kind of contemporary examples of it can be point to? There would be various things we could use as examples, but a recent headline pretty well fits the bill.

And it really is a shocker of a headline: “Christians offer to cover up crosses and picture of Jesus for Muslims to celebrate Ramadan in their church”. The news report begins: 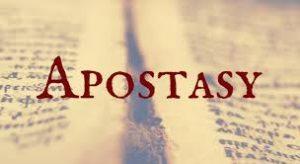 A Church of England vicar has been criticised for organising a celebration Ramadan in her parish church. The Reverend Lissa Scott agreed for the celebration of the Muslim fast to take place in St Matthew and St Luke’s church in Darlington. As part of the event, the Reverend agreed to ‘cover up’ the church’s cross and a copy of The Light of the World, a well-known devotional painting of Jesus by the pre-Raphaelite artist William Holman Hunt.

It is believed men who from a nearby mosque were invited to pray in the aisle of the church, while Muslim women were offered an adjoining set of rooms. The plans were discussed at a church meeting on May 9 attended by the Rev Scott, former Darlington mayor Gerald Lee, and a number of local Muslim representatives. Mr Lee has been seeking to boost racial harmony in the area with a group called Celebrating Communities, which mostly organised diverse social events.
www.dailymail.co.uk/news/article-7046347/Christians-offer-cover-crosses-Muslims-celebrate-Ramadan-church.html

This is just so wrong on so many levels. Where do I begin? This has all the hallmarks of apostasy. Here we have so-called church leaders who seem ashamed of their own Lord and their own faith, as they bend over backwards to placate a false religion and do everything to please those who are diametrically opposed to the essential beliefs of Christianity.

Islam of course teaches that it is sheer blasphemy to claim that Jesus is the Son of God. The very core of our faith is denounced unreservedly in Islam. Yet these progressive church leaders would rather please the followers of Islam than stand up for Christ and Christianity. Hmm, sounds like apostasy to me.

Not only is Islam bitterly opposed to the central tenets of Christianity, but it is responsible for killing millions of Christians during its 1400-year reign of terror. Yet these clueless wonders who pretend they are Christians want to have a groovy interfaith powwow with them.

They can sit around and hold hands and sing Kumbaya all they like, but it will be all one-way traffic. Muslims are happy to co-opt ignorant Christians for their cause, but they will never return the favour. There will NOT be mosques in the UK or anywhere else in the near future allowing Christians to worship there, as they cover up any Islamic symbols or quickly take out all the Korans, etc.

These apostates certainly know nothing of what Scripture teaches about false gods, false religions, idols and the like. God instructed his people in the Old Testament to have nothing to do with them. Indeed, they were to treat them harshly: get rid of them, destroy them, do not allow these pagan statues and images to remain.

Since I just finished 1 & 2 Chronicles again, let me quote some of the passages found there concerning how God’s people treated false gods and idols:

2 Chronicles 14:2-5 And Asa did what was good and right in the eyes of the Lord his God. He took away the foreign altars and the high places and broke down the pillars and cut down the Asherim and commanded Judah to seek the Lord, the God of their fathers, and to keep the law and the commandment. He also took out of all the cities of Judah the high places and the incense altars. And the kingdom had rest under him.

2 Chronicles 15:8 As soon as Asa heard these words, the prophecy of Azariah the son of Oded, he took courage and put away the detestable idols from all the land of Judah and Benjamin and from the cities that he had taken in the hill country of Ephraim, and he repaired the altar of the Lord that was in front of the vestibule of the house of the Lord.

2 Chronicles 17:6 His heart was courageous in the ways of the Lord. And furthermore, he took the high places and the Asherim out of Judah.

2 Chronicles 23:16-17 Jehoiada then made a covenant that he, the people and the king would be the Lord’s people. All the people went to the temple of Baal and tore it down. They smashed the altars and idols and killed Mattan the priest of Baal in front of the altars.

2 Chronicles 31:1 When all this had ended, the Israelites who were there went out to the towns of Judah, smashed the sacred stones and cut down the Asherah poles. They destroyed the high places and the altars throughout Judah and Benjamin and in Ephraim and Manasseh. After they had destroyed all of them, the Israelites returned to their own towns and to their own property.

2 Chronicles 34:33 Josiah removed all the detestable idols from all the territory belonging to the Israelites, and he had all who were present in Israel serve the Lord their God. As long as he lived, they did not fail to follow the Lord, the God of their ancestors.

And the New Testament also commands us to beware of idols and false gods. While pulling them down may not be enjoined, we are to fully steer clear of them nonetheless. Consider just a few passages:

Acts 14:15 We are bringing you good news, turn from these worthless images to the living God [referring to Greek gods and goddesses].

Acts 17:16 Paul was greatly distressed and grieved because Athens was full of idols.

1 Thessalonians 1:9 They tell how you turned to God from idols to serve the living and true God.

God demands exclusive worship in the church today just as he did with ancient Israel. Our God is a jealous God, and he will not share his glory with another. Simply recalling the words of the First Commandment should suffice here: “You shall have no other gods before me”.

Finally, consider the matter of Ramadan. This is NOT something any Christian should celebrate, participate in, or endorse. The simple fact is, historically Ramadan is a time when jihad radically increases, and even more infidels are targeted and killed than at other times. As I wrote earlier:

This month is in fact the time where Allah grants military victories to his followers through jihad. It is known in Islamic history as a key period for jihad. It goes back to year one in fact. But don’t take my word for it. Consider the words of one Islamic website on this:

“Jihad is the summit of Islam. Its virtue is countlessly high, as mentioned in many places of the Koran and Sunnah. . . . The month of Ramadan in the life of the Prophet (pbuh) and the righteous ancestors was a month of forthcoming. The greatest battles during the lifetime of the Prophet (pbuh) occurred in this blessed month, the month of jihad, zeal and enthusiasm.”
billmuehlenberg.com/2014/07/02/ramadan-and-jihad/

In so many ways this was an utterly idiotic and anti-Christian act by this num num church leader. Thankfully not everyone was happy with this decision in the UK. As the news item went on to say:

Christian Episcopal Church Bishop Gavin Ashenden criticised the plans because of the disrespect caused by covering up Jesus. ‘When Muslims come into our church, we invite them to come in and respect Jesus. If we accepted an invitation to go into a mosque, we would respect Muhammad,’ he said.

The diocese of Durham has intervened in the fiasco, stating that church law does not permit acts of worship by non-Christians in a Church of England building. Muslims are still set to join Christians and other faiths at the church at sunset on June 2 for the evening meal of Iftar which ends the daily fast.

There are plenty of ways in which apostasy can take place. But when church leaders effectively deny their own faith while grovelling before other false faiths, that would be a pretty good case of apostasy. Lord have mercy.