Some clear thinking on the Soleimani drone strike:

An Iranian terror chief who was responsible for the deaths of hundreds of Americans was taken out by orders of President Trump. Hot on the heels of Iranian militants surrounding the US embassy in Baghdad, the US President took prompt action to let the region know that he was not like Obama and other weak leaders who coddled terrorists instead of dealing with them forcefully.

But already the Democrats and the left (including folks like Corbyn in the UK) are siding with Iran as they side against Trump and America. For example, House speaker Nancy Pelosi complained, saying the action was “provocative and disproportionate.” 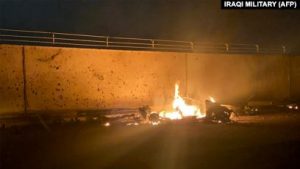 Watching the left carry on about this is something to behold. Indeed, there is so much moral and mental confusion going on here, as well as so much blatant hypocrisy and double standards, that one does not know where to begin in response. But let me try.

What actually happened was this: Qasem Soleimani and some other terror leaders were killed in a drone strike on Friday. It was a swift and decisive response by Trump, given that Soleimani was involved in the attack on the US embassy. Trump rightly knew that there is only one language that terrorists understand – and understand well.

As one news report stated:

Trump said Friday that he ordered the military strike against Soleimani, who he called “the number one terrorist anywhere in the world,” because Soleimani was “plotting imminent and sinister attacks on American diplomats and military personnel.”

“We caught him in the act and terminated him,” Trump said in a speech in Palm Beach, Fla. “Under my leadership, America’s policy is unambiguous to terrorists who harm or intend to harm any American. We will find you. We will eliminate you. We will always protect our diplomats, service members, all Americans and our allies.

“For years the Islamic Revolutionary Guard Corps and its ruthless Quds Force under Soleimani’s leadership has targeted, injured or murdered hundreds of Americans and servicemen. The recent attacks on U.S. targets in Iraq, including rockets strikes that killed an American and injured four American servicemen very badly as well as a violent assault on our embassy in Baghdad were carried out at the direction of Soleimani,” he said.

“Soleimani made the death of innocent people his sick passion, contributing to terrorist plots as far away as New Delhi and London. Today we remember and honor the victims of Soleimani’s many atrocities, and we take comfort in knowing that his reign of terror is over,” the president said. Trump said that killing Soleimani was something that “should have been done long ago.” www.cnsnews.com/article/washington/melanie-arter/trump-airstrike-killing-irans-top-commander-meant-stop-war-not

And other terrorists were also taken out in the strike:

Abu Mahdi al-Muhandis, a veteran Iraqi terrorist who was closely allied with Iran and rose to be a senior terrorist commander during the war against the Islamic State group, was killed overnight Friday in a U.S. strike that also felled Iran’s top general. Al-Muhandis was the deputy commander of the Popular Mobilization Forces, an umbrella group of mostly Shiite paramilitaries. He was also the founder of the Kataeb Hezbollah, or Hezbollah Brigades.

The U.S. blamed the group, which is separate from the Lebanese Hezbollah movement, for a rocket attack in northern Iraq last week that killed a U.S. contractor. The militias, many of which are backed by Iran and trace their roots back to the Shiite insurgency against U.S. forces following the 2003 invasion, mobilized in 2014 when the Islamic State group swept across northern and western Iraq. worldisraelnews.com/iraqi-militant-killed-alongside-soleimani-worked-with-iran-for-decades/

But of course the lefties are all in a spin about this. In the meantime however, many Iranians and Iraqis have been celebrating this event, overjoyed that this monster was taken out. As one said, “As an Iranian, I want to thank you with all my heart.” summit.news/2020/01/03/iranians-and-iraqis-celebrate-thank-trump-for-airstrike-that-killed-ruthless-military-general/

And to see just what a monster Soleimani was, simply have a read of this article: www.faithwire.com/2020/01/03/i-saw-qasem-soleimanis-brand-of-evil-firsthand-its-worse-than-you-could-possibly-imagine/

Also bear this in mind: while Obama had opportunities to deal with Soleimani but did not, that does not mean he had nothing to do with drone attacks and the like. He authorised plenty of them, with innocents being the main victims. But we did not hear the Democrats and the left complain about that: www.washingtontimes.com/news/2015/oct/15/90-of-people-killed-by-us-drone-strikes-in-afghani/

Lefties are also whining about a lack of Congressional approval. Wrong again. The US Congress has already authorised funding for military and other activity in this part of the world. And what approval did Obama get when he declared war on Libya? www.washingtontimes.com/news/2015/oct/15/90-of-people-killed-by-us-drone-strikes-in-afghani/

And another report that the Dems have conveniently forgotten about says this, “Obama launches 2,800 strikes on Iraq, Syria without congressional approval.” www.washingtontimes.com/news/2015/apr/27/congress-still-not-specifically-authorizing-islami/

Nor is this going to lead to WWIII. Iran is no match for the US, and the truth is, Trump has been quite restrained for several years now. His actions were justified, and it was a proportionate response. As David Harsanyi writes:

It’s simply that Trump, who showed plenty of restraint with Iran, couldn’t ignore Iran’s behavior anymore. This is the consequence of eight years of Obama pandering to the mullahs. Let’s remember: Not only did Trump’s predecessor give Soleimani — a man who specialized in mass murder — a pass, but helped fund his terror apparatus with ransom money. It’s no wonder that Soleimani functioned with impunity. Only days after orchestrating an attack on the American embassy, the head of the Quds Force, a U.S.-designated terror organization, felt free to drive around Iraq. Not anymore. As Eli Lake points out, Trump has effectively erased the distinction between Iran and its terror proxies. It’s about time. www.nationalreview.com/corner/iran-is-not-iraq/

Peter Heck concurs, and he too is ignoring the Twitterati and the snowflakes on the left: “But amid all the chatter, the predictions and prophecies of what would come of the U.S. airstrike, I wonder how many have paused to consider what President Trump’s decision has made incontrovertibly clear to a watching world: America’s threats are no longer idle.” He continues:

There was only one consistent, nagging problem. Like a parent who relentlessly threatens a defiant child with punishment that never materializes, Obama’s lack of disciplined follow-through disastrously weakened the country’s credibility. He caved on Syria, and ended up airlifting $1.7 billion in unmarked bills on pallets to Iran in the middle of the night, all in an effort to make nice with the terrorist state.

It is hardly conjecture to note that many of those dollars were subsequently put to use in financing Suleimani’s relentless strikes against U.S. servicemen and women in the region. With such recent history, it’s really no wonder that Iran would scoff at another U.S. threat. disrn.com/opinion/opinion-apparently-americas-red-line-means-something-again

Oh, and the reason I am writing this piece should be obvious. The mainstream media which is controlled by the left, and suffers greatly from Trump-derangement syndrome, will not tell you these sorts of things. That is why the alternative media exists. As Erielle Davidson puts it:

Given the geopolitical complexity of the region, reactions to Soleimani’s death demand nuance. But before any analysis can begin, we should as a society be able to agree that his death was justifiable. During the Obama years, our foreign policy was structured on placating terrorists in some fashion, so much so that Obama tipped off the Iranians to an Israeli plot to kill Soleimani years ago. Given, inter alia, Trump’s partial withdrawal from the Iran Deal,  the FTO designation of the IRGC, and the recent killing of Soleimani, that approach seems to no longer be the case.

As Michael Doran writes, “The decision to kill Mr. Suleimani represents the final demise of Mr. Obama’s Middle East strategy, which sought to realign American interests with those of Iran.” It seems the media is not only mourning the death of Soleimani, but the death of Obama’s legacy, a reaction which may explain their incoherent and emotionally fueled “analysis.” Determining what comes next is important. But acknowledging that a purely evil person was killed—and offering due credit to the Trump administration for his death—should not be so categorically challenging. thefederalist.com/2020/01/03/trump-derangement-prevents-media-from-praising-trump-for-iranian-terrorist-soleimanis-demise/

It would be incorrect to say that the left, the Democrats, and the lamestream media have no standards. They are awash with double standards – as well as hypocrisy, duplicity, and toxic anti-Americanism. If leftists like Pelosi, Corbyn and others are so desperate to defend Iran while dumping on America, I would be more than happy to chip in some cash to get them one-way tickets to Tehran. In my books, Iran is more than welcome to have them.

13 Replies to “On Dealing With Terrorists (and Double Standards)”