Yes it is actually a good thing that Soleimani is gone:

Since writing my first piece on the taking out of the Iranian terror leader, I have heard and read plenty of silly and senseless commentary. Such nonsense is to be expected from the left, but even some clueless Christians were churning out non-stop foolishness.

As I wrote yesterday, the anti-Trump leftist media has gone apoplectic over this, accusing the President of every sin under the sun. But as US Senator Marco Rubio tweeted, “#Soleimani is directly responsible for previous & future plans to KILL US diplomats & American service members in #Iraq & throughout the region. But some are so blinded by hatred of Trump that they argue he has done something sinister. It’s crazy. Total derangement.”

Most American media outlets are so far to the left, that they, along with the Democrats, prefer to champion a deplorable place like Iran while hating on America. As one report has said: “Liberal media finds its new Che Guevara in dead Iranian terror chief Qassem Soleimani. NY Times reporter posts video of Soleimani reciting poetry, while The New Yorker describes him as ‘a flamboyant former construction worker and bodybuilder with snowy white hair, a dapper beard, and arching salt-and-pepper eyebrows…’” legalinsurrection.com/2020/01/liberal-media-finds-its-new-che-guevara-in-dead-iranian-terror-chief-qassem-soleimani/ 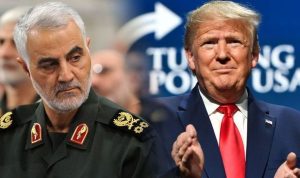 Things are just as idiotic here in Australia. Yesterday’s 6pm television news was appalling on this, as expected. For example, I watched the Ch 7 version of events, and was very quickly enraged by their partisan coverage. They spoke of the killing with words like “murder” and “assassination”.

Hmm, I did a quick internet search to see how the media described the killing of Osama bin Laden by President Obama back in 2011. I could not find the two words used above anywhere. If a left-wing Democrat President takes out a known terrorist, the lamestream media is just thrilled with that.

But if President Trump does the exact same thing, they go ballistic, accusing him of recklessness, war-mongering, causing instability, and failing to act in a diplomatic fashion. And of course the Hollyweird crowd of Trump-haters were just as reprehensible. The top prize has to go to a second-rate actress that I had never heard of before: Rose McGowan.

Her tweet tells us everything about what is wrong with liberals in Tinseltown: “Dear #Iran, The USA has disrespected your country, your flag, your people. 52% of us humbly apologize. We want peace with your nation. We are being held hostage by a terrorist regime. We do not know how to escape. Please do not kill us.”

Oh for heaven’s sake. But perhaps one of the most bizarre and idiotic things I read was a comment made by a “Christian” who came to a post of mine on the social media. He actually tried to defend the guy, claiming it was “fake news” that he was an evil dude. He said that just a few rogue soldiers were at fault, not him. Good grief!

Saner voices thankfully have spoken out about this guy and his evil legacy. For example, the editor of the German newspaper Bild Julian Reichelt said this:

Soleimani, the world’s most repelling and bloodthirsty terrorist, who brought suffering and harm over humanity on the mullahs’ behalf, was an enemy of our civilization. He represented the unbearable thought that murderers will live more safely and be more untouchable the more people they kill (with the support of the state). His violent and overdue end will not stop global terrorism, but the image of his burnt-out car still sends out a powerful message. US President Donald Trump has made it clear that the worst figures in the world, however big-mouthed and ruthless they may be, cannot hide from America’s strength.” www.jpost.com/Middle-East/Soleimani-was-a-monster-wanted-atomic-cloud-over-Tel-Aviv-German-newspaper-613086

Or as Kim Ghattas commented:

Soleimani was respected and feared, seen as either the evil mastermind behind policies of death and destruction or the genius architect of Iran’s expansionist policies. He was also hated, not only by Sunnis who suffered at the hands of his proxy militias in Syria and Iraq, but also by fellow Shias, including some in Iraq and Iran, where he helped uphold a repressive system and was seen as the man responsible for Iran’s role in costly wars abroad. He was not simply on a mission to undo the unsatisfying score of the Iran-Iraq war and make up for the conflict’s devastating death toll and the humiliation it served his country; he had become the mission, the upholder of the Islamic revolution, keeping it alive for Supreme Leader Ali Khamenei. (Soleimani was also key to defeating the Islamic State, but this served very specific purposes for the Iranian commander.) www.theatlantic.com/international/archive/2020/01/qassem-soleimani-death-missed/604396/

And Melanie Phillips put it this way:

Soleimani has been described by some outlets as a terrorist leader. This is vastly to underestimate his importance. The al Quds force of the Islamic Revolutionary Guard Corps is part of Iran’s hugely powerful proxy army, and Soleimani was the regime’s key military strategist and military commander. He launched countless military operations against US, Israel and others. He was responsible for hundreds of American deaths in Iraq. He was the invaluable architect of Iran’s territorial drive for regional incursion and hegemony. www.melaniephillips.com/killing-qasem-soleimani/

So bad was he that even the lunar-left New York Times had to begrudgingly allow for a pro-Trump opinion piece by Michael Doran. He said in part:

More than any other American military operation since the invasion of Iraq, the assassination yesterday of Maj. Gen. Qassim Suleimani, the head of Iran’s Qods Force of its Islamic Revolutionary Guards Corps, is a seismic event. The killings of Osama bin Laden and Abu Bakr al-Baghdadi, the leaders of al-Qaeda and the Islamic State, were certainly meaningful, but they were also largely symbolic, because their organizations had been mostly destroyed. Taking out the architect of the Islamic Republic’s decades-long active campaign of violence against the United States and its allies, especially Israel, represents a tectonic shift in Middle Eastern politics….

To no one’s surprise, Mr. Trump’s critics immediately accused him of needlessly provoking Iran, arguing that Mr. Suleimani’s assassination could lead to war. This is an analysis that ignores the fact that Mr. Suleimani has been waging war on America and its allies for years and was directly engaged in the planning of attacks.

The world to which we wake up today, rid of its most accomplished and deadly terrorist, is a better place. Nowhere is this insight more evident than throughout the Middle East, where individuals are posting joyous videos to social media, celebrating the death of the author of so much of their misery. We should all — even those among us who don’t particularly care for Mr. Trump — join them in their good cheer, and continue to repeal Mr. Suleimani’s murderous anti-American legacy. www.nytimes.com/2020/01/03/opinion/trump-iran-suleimani-assassination-baghdad.html

A few other voices of reason can be mentioned here. US Senator Ted Cruz tweeted this: “The end of Qasem Soleimani is welcome and long-overdue justice for the thousands of Americans killed or wounded by his Iranian-controlled forces across the Middle East, and for the hundreds of thousands of Syrians and Iraqi Sunnis ethnically cleansed by his militias.”

And this: “It is also long-overdue justice for our Israeli allies who have suffered decades of terrorism at the hands of Hezbollah terrorists commanded by his IRGC Quds Force.” The words of Kenneth Timmerman are worth running with at length:

The killing of Iranian terror-meister Qassem Suleymani in a targeted U.S. air strike in Baghdad on Thursday will have a dramatic impact on Iran’s ability to conduct oversea terrorist operations and the stability of the Iranian regime. But the real impact, one can legitimately wager, will be quite different from what you’ve been hearing so far from most of the U.S. and international media.

Rather than engendering some massive Iranian “retaliation,” as many talking heads have been warning, I believe this strike will throw the Iranian regime back on its heels, as wannabe successors contemplate their careers vaporizing in a U.S. drone strike and Iran’s civilian leaders fret that they have been exposed as emperors without clothes. Put simply, the aura of the Iranian regime’s invincibility is over.

They have pushed us and our allies repeatedly, and have been encouraged by the modest response from U.S. political and military leaders until now. But with this strike, the gloves are off. And the leadership in Tehran – and more importantly, the people of Iran – can see it. Suleymani was not some run-of-the-mill terrorist. He was worst of the worst; a man with more blood on his hands than even Osama bin Laden. Iraq, Lebanon, Yemen, Afghanistan, 9/11, Benghazi: all of them were his doing.

But he was also the most respected and the only charismatic military leader to have emerged since the 1979 Islamist revolution in Iran. No other leader in Iran today even comes close to Suleymani for sheer star power. This is a huge loss for the Tehran regime; bigger, indeed, than if the Supreme Leader himself (who actually is a nobody) died or was killed. www.frontpagemag.com/fpm/2020/01/bye-bye-suleymani-kenneth-r-timmerman/

Soleimani is gone. Good riddance. I sure won’t be shedding any tears over his loss.

13 Replies to “Soleimani, Sense, and Stupidity”