Time to get real about Morrison Derangement Syndrome:

Let’s get real here: the media-led war against the Australian Prime Minister has nothing to do with bushfires and everything to do with the left and its long-running war against Christians and conservatives. And before some folks go ballistic here, let me say I am certainly not a die-hard Morrison supporter by any means.

But anyone with eyes open can see that this is yet another leftist witch-hunt orchestrated by our elites, our commentariat, and the lamestream media. They hate Morrison and want him out, so any excuse will do. And the current round of bushfires (something that happens each summer) is a neat excuse for the left. 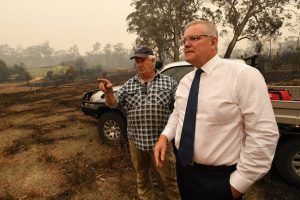 If you are a conservative leader, you WILL be attacked. As Martyn Iles of the ACL recently wrote:

Scott Morrison is finding himself in the same position as Tony Abbott. Big sections of the media want him gone, and it’s ugly. Nothing he does will be good enough. Every step, every word, every act, will be ridiculed, contemptible, broadcast in the most critical light, and the anti-ScoMo narrative will build steam, relentlessly. He visits fire-ravaged communities, he’s a shameless self-promoter. He stays away, he’s a useless leader. He gets accused of doing nothing, so he puts out a social media video explaining what the government is doing, and he’s derided globally as tone-deaf and insensitive for “advertising.”

Much of this started when the Prime Minister went on vacation. Um, earth calling nutjob critics: just about every person in Australia takes a break over the Christmas holidays, and millions take vacations, including overseas vacations. Yet somehow the loons on the left want to make his family vacation in Hawaii the cause of our fires.

Oh, and some Labor leaders are STILL on their overseas vacations – but the left and the media are not calling them out. I wonder why. But as I say, this is nothing other than a leftist crusade to get rid of Morrison. So any amount of double standards and out and out lies will do.

Anyone watching our media the past few days sees this in abundance. As but one example, a Ch. 9 evening news story last night on all this was one long leftist attack on ScoMo, and it concluded with the nonsense that he needs to start taking climate change seriously. Yeah right. Arson is a major cause of these fires, as our police are saying. As one report states:

“Police are now working on the premise arson is to blame for much of the devastation caused this bushfire season,” reports 7 News Sydney. Authorities in the country have formed Strike Force Indarra, comprising of detectives from homicide and arson units in an attempt to find the culprits. Other causes for the fires include lightning strikes and a natural weather phenomenon called Dipole, again neither of which have anything to do with man-made climate change. Many bushfires are also actually caused by environmentalist ‘green’ policies which prevent land owners from clearing their own vegetation to protect themselves. www.zerohedge.com/geopolitical/australian-police-say-arsonists-lightning-blame-bushfires-not-climate-change

And even the leftist SMH is admitting that overwhelmingly our fires are started by arsonists. As one recent headline put it, “Arson, mischief and recklessness: 87 per cent of fires are man-made.” www.smh.com.au/national/arson-mischief-and-recklessness-87-per-cent-of-fires-are-man-made-20191117-p53bcl.html

One rural Queenslander speaks some common sense about all this, and is well worth listening to:

As predictable as always, conservationists and opportunistic politicians are blaming these fires on climate change. Before I get attacked for being a climate change denier – I am not. But I am also a climate change realist. If you leave your front door unlocked, you can’t complain too loudly when someone steals your TV. It’s the same with bush fires.

You can’t blame climate change when there are no fire breaks or cool buffer zones installed around towns, houses and critical infrastructure. Some people haven’t seemed to notice that Australia is the second driest continent on earth, it gets very hot around this time of year, every year and our vegetation has evolved over the last 60,000 years to love bushfires. Big ones.

The Bureau of Meteorology have claimed that the “strong winds and high temperatures” are the reason for the catastrophic fires. No doubt wind and heat help flame the fires but they aren’t the “reason” or the “cause”. The real reason is Governments – local, state and Federal – over the past 3 decades have bowed to conservationists and green groups by locking up more and more of our national estate and sacrificing them to the flame every bushfire season. www.queenslandcountrylife.com.au/story/6485447/climate-change-doesnt-cause-fires/

He offers some practical advice here:

-Recognise that fire has always been a part of the Australian landscape but it’s the fuel loads when fires hit that is really important. A fire can’t burn if there is nothing or little to burn.

-Just by locking up a piece of scrub and calling it a national park does not make it so. By expanding national parks because it “feels nice” dilutes the resources to protect the areas of our environment that truly are special and endangered and creates a massive estate which is difficult to manage and maintain.

-One of the best forms of fire fuel reduction is low intensity cattle grazing. It’s low risk, low impact and puts people into areas that actually know how to manage the country and know how to fight fires.

Anyone who says cattle are bad for the environment and biodiversity should go and ask the millions of animals, birds and insects currently being incinerated in national parks and native forests.

Indeed, if we want to blame someone for so many of these fires, we could start with the Greens and their terrible policies which actually make things worse. As I wrote in my previous piece on these firestorms, the refusal to allow controlled burning and fuel reduction is a big part of our problem: billmuehlenberg.com/2020/01/03/on-australias-bushfires/

Some folks are so incensed with the Greens that they have launched a petition calling for the hyper-left Party to be de-registered. Hmm, sounds like a plan: www.change.org/p/scott-morrison-de-register-the-greens-party

But the left-wing meeja are still intent on getting Morrison any way they can. Thus they keep playing and replaying images of some angry residents rejecting Morrison. Never mind that many of these are just leftist ferals and greenies who hate Morrison anyway, no matter what he says or does.

The classic case of this was when the Prime Minister went to Cobargo, NSW a few days ago. We have seen that clip played umpteen times now. And we have media has-beens like Gretel Killeen demanding his resignation. As Chris Smith said in a heated exchange with her: “These people were seen to say, ‘We don’t vote Liberal down here, come on, get out of here, P off, F off’. It was feral activity.”

And locals said they do not appreciate the handful of leftists claiming to speak for their community. Have a listen to this four-minute audio clip. They say it is a “shame” that this handful of “no-hopers” were given all this airtime. “This is not what we are” these residents are saying: omny.fm/shows/the-steve-price-show/it-s-wrong-cobargo-resident-ashamed-of-treatment-o

As another resident tweeted:

You see the few people who hi-jacked the Prime Minister at Cobargo were nobodies the real people have missed out, the Prime Minister didn’t flee he had better things to do than waste time with ferals, locals don’t even know these scraps and are upset they didn’t get to talk to him. Why are the media just focusing on these scraps? The media went to great pains of sending all their news international but didn’t send the truth. The media are attacking Australia.

But leave it to our bigoted and biased media to try to make the case that Morrison is evil, he is fully responsible for our bush fires – and every other bad thing that happens, including this morning’s burnt toast – and he must go immediately.

As I said, I am no diehard Morrison fan – he is not the strong, consistent conservative leader I would prefer being in the top job. However, anyone but Blind Freddy and ideological leftists know that this war on Morrison is just a media beat-up, run by Labor, the Greens, and the left.

The truth is these leftists are still angry that Morrison won the election last year. They are just like the Democrats and the left in America who also can’t stand the fact that Donald Trump was democratically elected by the American people.

44 Replies to “The Left’s War on Scott Morrison”