While murderous dictatorships and tyrants operate today, their days are numbered:

Let me make this a bit more concrete. Although I was a radical leftist in my youth, my Christian conversion at age 18 led me in a more conservative direction. I thus became aware of things like the evils of Communism, and I often thought and prayed about how long the diabolical Soviet Union and Eastern Europe would keep enslaving and murdering millions.

The Bolsheviks had taken over Russia in 1917, and it was not until 1989 that the Berlin Wall started to come down. That is 72 years of monstrous oppression and tyranny. See my just published piece on the horrors of Soviet Communism here: billmuehlenberg.com/2020/03/08/communism-we-dare-not-forget/ 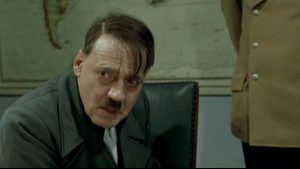 Those who actually had to live through all that must have thought it would never end. Billions of prayers from within and without this Marxist hellhole would have gone up to the heavens. But in the end – like all devilish tyrannies – it all came to an end. No human totalitarian state lasts forever.

While that may seem like little consolation to those enduring such things, it can be of some help to know that none of these things will last forever. Indeed, the Christian understands that no human kingdom continues for long, and only the Kingdom of God remains.

I will speak to these spiritual and biblical realities further in just a moment, but let me look further at two of the most horrific and deadly tyrannies of the past century. I already mentioned godless Communism. Obviously Nazism was the other great evil that we were inflicted with.

It did not last as long as Soviet Communism of course. Hitler came to full power in 1933 and the Nazis were defeated in 1945. But still, in that short period of time so many millions of lives were lost and so much Satanic evil was unleashed upon Europe.

I partly write about this with renewed interest for two reasons. Yesterday I wrote a piece looking at four very important books penned by Richard Weikart. All deal with Hitler and the Nazis, and all are connected with the Darwinian roots that preceded this and the evil eugenics that it spawned: billmuehlenberg.com/2020/03/07/authors-you-should-know-about-richard-weikart/

The second reason was a film I happened to watch last night on television. It has been shown before, but this is the first time I watched the entire movie. I refer to Downfall, a 2004 German/Austrian film about the final days of Adolf Hitler as Russian troops surround Berlin.

A number of things can be gleaned from watching such a film. One is how deluded Hitler was – almost to the end. He still thought he had divisions of German troops elsewhere that would soon liberate Berlin from the Red Army. And he still believed in his dream of the Third Reich: that it would continue, and he would create a new Germany and a new world.

When it finally became apparent to him that this was not to be, and that the Russians were nearly upon him, he and Eva Braun committed suicide, as did a number of other top German leaders. Their reign of terror finally came to an end. Hitler was 56 years old when he took his life.

And that leads to another thing that stood out for me while watching the film, and that is the main theme of this article. For years so many millions of people suffered so horribly at the hands of Hitler, yet in the light of history – and eternity – he lived a relatively short life. His thousand-year Reich barely lasted over a decade. His reign of terror ended rather abruptly.

Yes, so many suffered so much, but all earthly rulers – including all horrendous dictators and tyrants – live for only so long. Their evil empires do indeed come to an end. The ancient Assyrians are no more. The once mighty Roman Empire is now the stuff of history books. The Ottoman Empire is long gone (although political Islam lives on). Soviet Communism had a 72-year run, and then met its end.

All are now part of the dust bin of history. The truth is, we serve a God who is the Lord over the nations. He is the one who has an unshakeable Kingdom. All other rulers and realms are all very temporary. None will last. Again, those who are forced to live under the terrible tyrants have to go through so much horrible agony and hardship.

But all these mere mortals – be they Caligula or Genghis Khan or Stalin or Pol Pot or Ayatollah Khomeini or Robert Mugabe – have met their end, and current monsters and madmen like Kim Jong-un or Recep Tayyip Erdogan will soon enough meet their end.

They are but a drop in the ocean of not just human history but of eternity. Let me finish with two Bible verses – out of many – along with a bit of commentary; one from each Testament. Psalm 2:1-6 says this:

Why do the nations conspire
and the peoples plot in vain?
The kings of the earth rise up
and the rulers band together
against the Lord and against his anointed, saying,
“Let us break their chains
and throw off their shackles.”

The One enthroned in heaven laughs;
the Lord scoffs at them.
He rebukes them in his anger
and terrifies them in his wrath, saying,
“I have installed my king
on Zion, my holy mountain.”

The enthroned God sees these human beings, knows their plots and pretensions, and is unconcerned. Like an earthly monarch facing down his opponents, God “laughs” and “scoffs”. Although we may not find the psalmist’s chosen imagery of a laughing, scoffing God appealing, the intended message remains clear: God’s power is so great and his position so secure that he need not take any coalition of human powers as serious threats to his rule.

I saw heaven standing open and there before me was a white horse, whose rider is called Faithful and True. With justice he judges and wages war. His eyes are like blazing fire, and on his head are many crowns. He has a name written on him that no one knows but he himself. He is dressed in a robe dipped in blood, and his name is the Word of God. The armies of heaven were following him, riding on white horses and dressed in fine linen, white and clean. Coming out of his mouth is a sharp sword with which to strike down the nations. “He will rule them with an iron scepter.” He treads the winepress of the fury of the wrath of God Almighty. On his robe and on his thigh he has this name written: “king of kings and lord of lords.”

The purpose of this passage is to highlight the glory of the coming King. It is intended to give hope to suffering Christians by showing them that they have a King who is coming who will triumph over their enemies….

Throughout Revelation, Rome and its Imperial Cult is the historical reality behind the persecution of Christians, because Christians refused to participate in its idolatry and immorality. . . . It appears that John has described Jesus as the ultimate realization of Rome’s greatest fear. Jesus, not Nero, will lead a cavalry charge greater than anything Rome has ever seen to seize power. Jesus, not Nero, and not some beast with a wounded head, rose from the dead. Jesus, not Nero, is worthy of worship.

This is wonderful news for all those who are languishing under tyrants, suffering under dictators, and being oppressed in evil nations. One day it WILL all come to an end, and all nations WILL bow down and worship the one true ruler. Glory to God.

11 Replies to “Tyranny, Terror and the God Who Is There”