We all need to keep asking questions as the surveillance state gets ever more ominous:

Now, more than ever, we need to bear a few things in mind. Simple things. Basic things. But things that can too easily go out the window in times of crisis and national emergency. So what are those things? I am glad you asked. Here is a very short list: 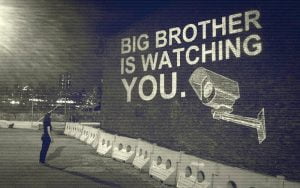 Now let me say before going any further that I am not a conspiracy theorist. I am not buying so many of the rather nutty things being said now about corona, and I do not watch most of these videos making the rounds. We must be reasonable here, use some common sense, and not run with every loony thing everyone says.

But so too we must not just blindly accept everything our governments are saying. Probably many if not most politicians and leaders have good intentions. But not all do. And even good intentions can result in bad outcomes. So I am not saying there is some sinister monolithic conspiracy at work here, but I do know how crises can be used as power grabs.

I have spoken about this often now. All the stories of overreacting governments, draconian laws and guidelines being enacted, and cases of overzealous police at work demonstrate this. Yes I know, most police are good folks and just doing their jobs (although we must always keep in the back of our minds the excuse heard at the Nuremberg trials: “I was only following orders”).

The corona surveillance state is indeed getting to be a real worry. And every time I seek to warn about this, I get some rather clueless sheeple telling me to just ease up. For example, I had one guy telling me that we should not be too hasty in these warnings about the meltdown of our economy and the loss of our freedoms.

Power does corrupt. History teaches us this and everyday experience bears this out. Last week I went to a well-known grocery store chain to get a few things. There were two guards outside of it. There were around four of us wanting to get in but we could not. They had the now mandatory pieces of tape on the ground telling us where to stand, and then one of these guys let loose in a real power trip.

He actually gave us a five-minute sermon about all the rules that we must follow, how serious this is, and if anyone dares to disobey, there would be very severe ramifications. I kid you not. He was a little Hitler. He was just going overboard in being a tinpot dictator.

If he had the slightest common sense, or knew anything about how to deal with people, half of what he said would have included the following: ‘I know this is a real inconvenience, and I apologise for any troubles, and I know this is tough on all of us, but here are a few guidelines we urge you to keep in mind as you shop with us…”

Hey, I would have had no problem with that, but this guy was on an ego-trip and was letting this newfound power go straight to his head. If one little guy can get this bad, imagine what some power-hungry politicians can get up to!? Again, most are not this way, I trust. But things are getting pretty scary out there nonetheless.

Let me give just one other very slight but real example of all this. I just came back from a brief walk around a few blocks. Yes, the thought did cross my mind that a cop might pull me over, cuff me, and drag me away! Seriously however, I did come upon a woman outside of her home taking a picture.

She had affixed a teddy bear to the front gate along with a sheet of paper with these words on it: “Pleeease can I come out soon” along with a sad face drawn on it. She said that she was going to send the pic to her granddaughter. I said that I agreed, and that we are all getting quite tired of this lockdown.

Let me finish with three quick things. In an earlier piece that I did today I wrote about the need to ask hard questions, and to especially look carefully at the corona numbers being thrown around. I urge you to see the many important questions raised there: billmuehlenberg.com/2020/04/10/corona-the-numbers-and-some-hard-questions/

One video that I just saw online is another example of how we must investigate things, ask questions, and not always blindly buy the official narrative. The 14-minute video seems to be raising some legitimate concerns here. It is about an ICU nurse with 30 years’ experience who questions the way corona deaths are being reported: www.youtube.com/watch?v=FCgea5o3ALU&fbclid=IwAR28dmPsET1te2cm3pYc0h-12LMFObmftvmTVH2tU628vZxivOYEy4Gd5gg

Assuming most of that is accurate, it is a real worry indeed. And for a look at how Australia is heading down the road to digital serfdom, see this recent piece: www.melbournelibertarian.com/2020/04/the-road-to-digital-serfdom-and-the-police-state-are-intertwined/

Finally, one writer I have often found to be quite helpful has a new article out on these matters. The headline for English columnist James Delingpole’s piece is this: “‘Trust the Experts on Coronavirus’. Sure. Which Experts?” He begins it this way:

“Britain could suffer more than 60,000 coronavirus deaths by July, warns the Daily Mail.” But there’s a massive tell in the first sentence of the report: “…leading scientists say.” And there’s an even bigger warning in the second paragraph: “Modelling by researchers at the University of Washington predicted 151,680 people would succumb to the virus across the continent.”

Well maybe they will, maybe they won’t. No offence to the University of Washington but when I read the phrase “modelling by researchers” I know we are operating in the realms of purest fantasy. That’s because I’m a climate sceptic and I’ve seen it all before.

The fact that computer models are unreliable — often based on the junkiest of junk data inputs; programmed with the shonkiest and most politically motivated algorithms, put together by people you wouldn’t trust to run a bath let alone dictate government policy — is the single most important thing you need to know about the entire global warming/climate change scam. This was the basis of the 2009 Climategate scandal: that the scientists were pushing a radical, disruptive, economically damaging agenda without any solid supporting evidence.

Everyone on the climate sceptical side of the argument knows this: the models are deeply suspect; the people behind them third rate; the scientific establishment pushing them arrogant, intellectually and morally corrupt, driven by politics, money and power not by honest science.

That’s why climate sceptics like myself have often been much quicker to understand what the rest of the world is only slowly starting to grasp: that our governments’ response to coronavirus has been a wild overreaction; that the cure is in danger of causing much, much more damage than the disease itself.

His concluding words are these:

The history of science is littered with examples of vested interests, intransigent or dishonest Establishment shills (such as Stalin’s pet liar Trofim Lysenko), false assumptions, Appeals to Authority, and whopping errors. This is in the nature of science: an ongoing process of trial and error, conducted by flawed human beings who have got to eat and pay the rent.

That’s why, usually, few governments have ever been so stupid as to entrust vital policy decisions to such people. That way madness lies. Yet madness, currently, seems to have been the course most of the world’s great economies have adopted. Trust the experts, the politicians tell us. But we don’t know these experts. We have no idea whether or not we can trust them or their models. And we certainly never voted for any of them — nor, unfortunately, do we have the ability to boot them out of office when they fail us.

That’s why we should all be concerned, very concerned about what’s being done to our countries in the name of dispassionate ‘expert’ advice. President Trump’s first instincts — as they so often are — were right. ‘We can’t have the cure be worse than the problem,’ he said. Amen, Mr President. So, sooner rather than later, please can we have our countries back? www.breitbart.com/europe/2020/04/09/trust-the-experts-on-coronavirus-sure-which-experts/

In sum, don’t panic. Don’t succumb to fear and paranoia. Don’t buy all the conspiracy theory stuff that is out there. But on the other hand, don’t stop asking questions and thinking for yourself. Now more than ever we need some independence of thought.

13 Replies to “On Our Corona Surveillance State”